Being Cool
Flirting with girls

Neptune Vasilias is a supporting character in the world of RWBY and a member of SSSN.

He is set to appear as a major character in the 2020 novel RWBY: Before the Dawn.

He is voiced by Kerry Shawcross in the English version, and by Yoshiki Nakajima in the Japanese version.

Neptune appears to know his teammate Sun Wukong, with whom he is good friends, from before the series. He is a student from Haven Academy.

Neptune is shown walking around Beacon Academy with Sun, who excitedly tells him about his experiences with Blake Belladonna. During their conversation, Sun lets slip that Blake is a Faunus before making Neptune agree to keep this a secret.

Sun then brings Neptune to the cafeteria in order to introduce him to the rest of Team RWBY, who are in the process of having a food fight with Team JNPR. Neptune gets caught in the crossfire of this epic battle, getting drenched in purple soda. While Sun seems incredibly amused by this, saying, "I love these guys!" Neptune simply smolders angrily.

Neptune later enters the library with Sun, who introduces him to Team RWBY properly. Noticing they are playing a board game, Neptune says that libraries should only be for reading, and Lie Ren agrees from across the room. However, he is told by Sun to be quiet and not act like a nerd. Neptune simply responds that he is only being intellectual before introducing himself to Weiss Schnee.

When Team RWBY begins their investigations into Roman Torchwick's activities, Neptune is with Sun when he tells the four girls that "friends should always get involved". Neptune asks to come in, and he is partnered with Yang Xiao Long as she goes to visit her "old friend" despite Weiss' protests.

During their investigation, Yang and Neptune ride on Bumblebee to go to Junior's club. Unfortunately, Junior Xiong has no new information because Torchwick has not come to meet with him since Yang's first appearance at the club. Neptune tries to flirt with Melanie and Miltia Malachite but is unsuccessful. He is seen seemingly getting weak-kneed for Yang, but he is also berated by Junior when asked where his men went; they have not came back.

As the pair begin to leave, Yang receives Blake's call for help, informing the rest of the team that she and Sun are being chased by Torchwick in the Atlesian Paladin-290. Neptune and Yang take Bumblebee to assist the two of them. Neptune manages to avoid many cars thrown at the two of them by Torchwick before firing on the mech with his weapon's gun form. He then changes his weapon into its glaive and trident form before leaping off Bumblebee and driving it into the mech's back.

However, despite Sun using his Semblance to aid his friend, the two are knocked off of the highway, leaving Team RWBY to finish the fight. It is later discovered that the two had gone to A Simple Wok where Sun reassures his friend that he was sure that the girls were safe.

Aftermath and The Dance

In the episode "Extracurricular", Neptune is seen with the rest of Team SSSN outside of Beacon Academy.

Neptune accompanies Sun to see Ruby Rose, Weiss, and Yang while they are setting up for the upcoming Beacon Dance, asking if they will actually have fog machines after hearing an argument between Yang and Weiss about some of the decoration choices. He later interjects and chastises Sun for not knowing what he's talking about when the latter suggests he can just go to dance in his usual attire. Neptune is later seen being approached by Weiss, who invites him to come with her to the Dance.

At the Dance, Neptune is spotted by Jaune laughing with Blake and Sun when it is revealed he in fact turned down Weiss' invitation. Some time later he walks in coincidentally to find Jaune outside on the balcony, where he tries to start a conversation assuming Jaune thought the Dance was lame though complimentary of the girls present.

Jaune angrily calls him out as to whether he takes any of the girls he hits on seriously, which flusters Neptune, who asks where this came from. Jaune then reveals that he knows Weiss asked Neptune to the dance, which Neptune tries to evade answering before Jaune demands outright what possible reason Neptune could have turned her down for.

Neptune embarrassingly admits he can't dance, which shocks Jaune, given the cool persona Neptune often projects. His anger deflated, a baffled Jaune basically asks Neptune to confirm that he'd rather turn down a girl and hurt her feelings rather than simply admit he can't move in rhythm to music, to which the latter responds affirmatively. Neptune tells Jaune that if he likes Weiss, he won't interfere should he want to pursue her; however, Jaune then turns the question back on him, asking if he genuinely likes Weiss himself.

Neptune states that he does, though he doesn't yet know her that well. In response, Jaune suggests that he simply go talk to her and be honest without any of the pretense. Neptune takes his advice to heart and thanks him before telling Jaune he's a cool guy, though the latter sarcastically tells him to stop lying to his face before they part with a reconciliatory fist bump.

Neptune is later seen talking to Weiss, before taking a seat next to her alongside the dance floor. After a sterling dance number by Team JNPR, Weiss asks Neptune what changed his mind, before he inclines his head toward a dancing Jaune, commenting to Weiss that she had some good friends looking out for her.

Neptune and Sun meet up with Team RWBY shortly after Team JNPR's arrival, informing the girls of their mission to shadow a crime specialist. After Oobleck calls for the girls, Sun and Neptune, like JNPR, sympathetically stare at Team RWBY before going their separate ways.

Neptune and Sun arrive during the attack on Vale, but they are not shown to do any on-screen fighting.

Neptune and the rest of the members of Team SSSN participate in the Vytal Festival Tournament. Their first match is against Team NDGO of Shade Academy, from the kingdom of Vacuo. Neptune attempts to flirt with them to no avail, prompting Sun to call him "dumb".

When Team SSSN's half of the field was revealed to be an ocean biome, Neptune is horrified, revealing his fear of water. At the start of the battle, he immediately flees into the other half and climbs a rock mesa to get away, claiming he is guarding the higher ground as an excuse. Later on he descends again and shot at Octavia Ember to provide covering fire for Sun, but otherwise he remains out of the fight until both Sage and Scarlet are eliminated, leaving Sun alone against the remaining members of Team NDGO.

Neptune outright refuses to approach the wet side of the field at first, making more excuses to Sun, but eventually he joins in the fight after a short argument, shooting Dew Gayl and then using his trident to electrocute the entire body of water, defeating Team NDGO. After the fight, he is briefly seen dancing in celebration with Sun.

Later, he is seen as a spectator at several matches.

The Battle of Beacon

Neptune is among the group of students present at Amity Colosseum at the beginning of this Grimm attack on Vale. His weapon flies to the floating arena in a rocket-propelled locker. After a Giant Nevermore breaks into the stadium and is defeated, he is among the students that choose to fight this battle rather than flee. The group takes an Air Bus to Beacon where they begin to fight the Grimm.

After the fall of Beacon Academy, Neptune returns to Mistral with Scarlet and Sage. Sun tells them that he will catch up with them later before leaving for Menagerie with Blake.

Neptune is a teenage boy with tan skin, dark-blue eyes and messy light-blue hair that is shaved on the sides and in the back, aka, an undercut.

He wears a white dress shirt and black tie under a red jacket adorned with a wide, upturned, black collar, and a silver reticle across the back. He also sports a pair of gray jeans with black padding strapped to the sides, as well as black shoes fastened with straps instead of laces.

Notable accessories within his attire include black fingerless gloves and a pair of yellow-tinted goggles typically worn on his forehead. However, when necessary, Neptune won't hesitate to make practical use of the latter, protecting his eyes from wind and sand in high-speed chases and battles, as seen in "Painting the Town..." and "New Challengers..."

Neptune is shown to be a calm, collected, and respectful individual with a carefree personality. He maintains a positive impression with people he meets and often hangs out with his friend Sun Wukong, who describes him as being cool. Neptune is prone to flirting with girls, as shown through his interactions with Yang Xiao Long, Weiss Schnee, and even Miltia and Melanie Malachite, despite having just met them at the time. However, he is only successful with Weiss.

He's shown to be fashion-conscious, like when he interjects that Sun doesn't know what he's talking about following the latter's claim that he can simply wear his casual clothes to the upcoming Beacon Dance.

Aside from fitting the stereotypical popular guy image, he may have an intellectual side as well as evidenced in the episode "Welcome to Beacon". When Sun says "Don't be a nerd", Neptune quickly corrects his friend, calling himself an "intellectual". This intellectual side of him shows through, when it is later mentioned that he defeated Ruby Rose, Weiss, and Yang in a round of Remnant: The Game off-screen.

Despite his cool demeanor, Neptune is very self-conscious of his image and can be easily embarrassed over his minor inadequacies, like his inability to dance, and refused to admit his fear of water. His tendency to protect his reputation can sometimes make him inconsiderate to the feelings of others.

Neptune has a couple contradictory nervous tics. When Ruby forces him to be Yang's partner, taking hold of him and moving him where she wanted him to stand, he becomes stiff as a board. This same behavior is seen when Neptune notices the ocean biome in "New Challengers". However, when Jaune talks to Neptune about his refusal to go to the dance with Weiss, instead of becoming stiff, Neptune becomes restless, rubbing the back of his neck and looking away.

Neptune at one point was poor at keeping secrets. When Sun lets it slip that Blake Belladonna is a Faunus and wants to keep it secret, he mentions Neptune telling Scarlet David secrets in the past behind his back.

Although Neptune hasn't been seen in much combat yet, he has shown himself to be very skilled with his weapon, in both gun and bladed components. In "Painting the Town...", Neptune demonstrates exceptional marksmanship, managing to hit the Atlesian Paladin-290 several times, even while riding on the back of Yang's motorcycle, Bumblebee. For melee combat, Neptune's weapon transforms into a trident that can emit an electrical shock powerful enough to incapacitate opponents partially submerged in water. 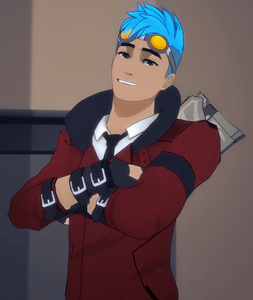