Heroes Wiki
Register
Don't have an account?
Sign In
Advertisement
in: Mature, Elder Scrolls Heroes, The Chosen One,
and 35 more

The Indoril Nerevar
The Outlander

The Nerevarine is the given title to the player character in the video game Elder Scrolls III: Morrowind. It is a prophesied figure of Morrowind's folklore and national history that emerges once a generation and is always a figure of great historical importance.

Nerevar and the First Council

The land of Morrowind was founded by a group of Elves called Chimer, an offshoot of the Altmer. The Chimer immigrated to the land that would become Morrowind, where they found another elven race already living there; the Dwemer, smaller in number but highly advanced engineers.

Though the Chimer and Dwemer tried getting along at first, banding together to fight for Morrowind's independence from the Nordic Empire, the two eventually became embroiled in cultural conflict and a war broke out. The Chimer lord, Indoril Nerevar, had forged a peace with the Dwemer lord Dumac, but eventually the peace broke down when Dumac's adviser named Kagrenac found the heart of Lorkhan, a physical creator god of yore.

Kagrenac had been experimenting in secret on the heart to try to create a man-made god. The Daedric Prince Azura, a primary god of the Chimer, gave Nerevar a vision of Kagrenac's attempts, and Nerevar confronted his old friend Dumac about his mad adviser.

Dumac was shocked by the ambition and mental instability of Kagrenac's plan, but the Dwemer culture was primarily agnostic, and demanded he allow any research to continue. Chimer, on the other-hand, were polytheistic, and not only considered the experiments dangerous, but blasphemous.

Despite Nerevar and Dumac's friendship and desires for peace, it was Kagernac's proclamation of science's superiority to religion that divided the two races and forced the two into war. A long and bloody war followed. Nerevar prayed to Azura for a vision into the nature of Kagernac's mad experiments. Azura revealed the location of the Heart of Lorkhan and a secret passage into Dumac's palace.

Nerevar charged with his general, Voryn Dagoth, into Dumac's palace in the volcanic Red Mountain and fought Dumac. Panicking over the situation, and well aware that there was a serious chance of losing the war and ending his research, Kagrenac stepped-up his experiment to its most dangerous and radical stage; he struck the Heart of Lorkhan with his finely crafted tools and vanished.

Kagrenac, Dumac and the entire Dwemer race simply vanished when the Heart of Lorkhan was struck. The war was over, but Nerevar lay dying, mortally wounded from the battle with Dumac before he had disappeared. Dagoth seized Kagrenac's tools and went to throw them into Red Mountain.

Nerevar stayed Dagoth's hand and bid him guard the tools while he met one last time with his with wife Almalexia, and advisers Vivec and Sotha Sil one last time. Nerevar asked that the Tools be preserved for posterity's sake and used against the Dwemer should they ever return, but made the council swear to Azura that they would never allow them to be used as Dwemer had done.

Almalexia, Vivec and Sotha Sil made the oath. When a bleeding Nerevar and the Tribunal went to the chamber of the Tools they saw Dagoth, who was tasked with guarding the Tools, instead attempting to use them, ranting about the power he could wield with the Dwemer's heretical Tools, it was clear that Kagrenac's madness had gripped Dagoth.

Nerevar struck Dagoth. Dagoth escaped, alive but injured and disgraced. Sotha Sil, gripped by whatever madness had befallen Dagoth from Kagrenac some say, secretly began studying the Tools and theorizing about actually becoming a physical god with them.

Sotha Sil soon convinced his still disheartened co-rulers that they could became gods themselves if they used the Tools correctly. The Tribunal broke their oath and journeyed to Red Mountain with the Tools, striking the Heart of Lorkhan and taking it's power for themselves. The three became physical gods, but for their presumption, heresy, ambition and dishonesty to both their goddess and their fallen Lord, Azura appeared before them and lay a curse the entire Chimer race, changing their skin grey with the ash of the Dwemer and making their eyes a profane red, turning them into the Dunmer (Dark Elves). Azura was not the only one outraged, and it is stated that Nerevar's spirit, betrayed, could not find peace, though it had already moved on.

Therefore, Nerevar returned from the dead, in a way. Nerevar was reincarnated and would continue to be reincarnated until it could find peace permanently. Throughout the ages, it was said the Nerevar rose to single-handedly create a turning point for whatever age his current reincarnation lived in, this reincarnation is titled, the Nerevarine.

When Dagoth returned, permanently warped to something no longer mortal, the land of Morrowind plummeted into chaos, twisted monsters roamed the land, elves were struck with a bizarre "soul sickness" that gave them nightmares, drove them mad and had them march off to Red Mountain. Dagoth Ur seized the Heart of Lorkhan, cutting off the Tribunal's power at it's source and preventing them from interfering with his bid to become a god himself.

The player character is believed to be Nerevarine, as one by one they achieve feats that prophesy dictated would be completed by Nerevar upon his great return. Once the player unites the Houses of Morrowind, the Tribunal becomes wary that the time of their end approached when Nerevar would make them pay for breaking their oaths and yet with Dagoth Ur stealing their power, corrupting their people and amassing his power to take over Morrowind, and then likely the world.

The Tribunal began to place their faith behind the Nerevarine, for with Dagoth in control of the Heart of Lorkhan, if they tried to use their dwindling powers publicly and failed it would disgrace them all. Dagoth Ur stole two of three Tools from the Tribunal with the help of his cult of brainwashed elves but the power lost was only half the Tribual's problem it was also very bad for them publicly to be seen weak enough to be stolen from in the first place and dissidence began to spread.

While Sotha Sil and Amalexia dealt with the fallout Vivec calls the player to his great study to examine him/her, explain the situation and determine if indeed it was Nerevar reincarnated. At the end Vivec was certain that it was in-fact Nerevar and entrusted his Tool to him/her charging them with the monumental task of defeating Dagoth Ur and ending the blight on the land. The Nerevarine would strike the Heart of Lorkhan one final time ending Dagoth Ur's hold on the Dunmar but also ending the Tribunal's power. It is said that this at last fulfilled Nerevar's soul and is strongly implied that that lifetime was the Nerevarine's final reincarnation.

As with all Elder Scrolls games, the personality of the Nerevarine is left in the player's hands. However, the options for addressing the title of "Nerevarine" paint a somewhat unique characterization of them. The Nerevarine is only first confirmed as such by Vivec.

The Nerevarine him/herself will have multiple dialogue options, indicating either great honor and revelation at the notion of being the reborn version of Nerevar, not believing the claim and thinking Vivec is just delusional, or just not concerned with whether the claim of reincarnation is true or false. As a result, when the Nerevarine unites the houses, takes on Dagoth-Ur, and eventually the Tribunal themselves, they are acting out of political convince.

There would be no other way for so many doors (both literal and figurative) to be open to a common-birth ex-prisoner without also being a "chosen one". The voices in the player character's head seem to imply that Vivec is right, and they’re the latest in a long line of reincarnations, but similar effects can be achieved through magic, and Vivec is greatly guilt-ridden for going back on his word to Nerevar.

This makes him biased, and as a semi-divine being, his slightest whims may manifest spell-effects, even if he is not consciously trying to invoke them. It is left to the player themselves to decide if "The Nerevarine" is the real reincarnation of Nerevar or not. Even if the Nerevarine is the true reincarnation of Nerevar, they may not know it, and just be going along with the legend for the attached prestige being handed to them.

Because of this ambiguity, the Nerevarine can range from Messiah to con-artist, and anything in-between.

During the events of the Elder Scrolls IV: Oblivion, a common rumor of the locals is that the Nerevarine has united the Houses of Morrowind, and is currently the de-facto leader after the destruction of the Tribunal. Although the Nerevarine holds no legitimate legal power, their actions at the very least would make them a Paragon of the Dunmer, even if they are a con-artist.

Moreover, one of the patron Daedra of Morrowind, Boethiah, pulled a similar con by impersonating the demi-god Trinimac, and is worshiped for using a con to teach the Dunmer about not giving into false hope, even by so-called divine sources. It is unclear if the Nerevarine is still alive during the events of Elder Scrolls V: Skyrim, as non-eleven races and Orsimer do not live that long, unless they are very adept wizards.

However, the expansion Dragonborn re-introduces the Dunmer wizard, Neloth, who refers to his house working with the Nerevarine to restore Morrowind after the eruption of the Red Mountain. Neloth's comments referring to the Nerevarine in the past tense, could mean either that they have died off or just be referring to past events. As the Nerevarine is not strictly canonically Dunmer or a mage by necessity, the game has no way of confirming their continued life 200+ years after the events of Morrowind.

However, as of the events of Oblivion, just six years after the events of Morrowind, the Nerevarine is still alive and helping re-establish stability after the major political upheaval of the Tribunal. 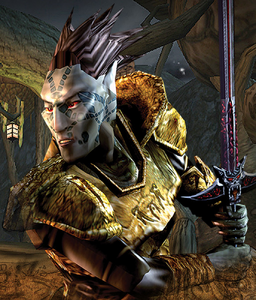