The World's Cutest Kitten (by himself)

The World's Most Obnoxious Cat (by Garfield), The Cutest Cat In The Whole Country (by Garfield), Incredibly Cute Cat (by Ultra Powerful Guy), Nermal Cat

Mischievous Animal
Nermal Cooper Kitten is a small Grey Tabby cat, whom Jon first called "The Worlds Cutest Kitten" and of whom Garfield is jealous.

Nermal called himself this from then on. He frequently made unannounced visits into Garfield's home, where he flaunted his cuteness and became the focus of Jon's attention for the entire duration of his visit, much to Garfield's exasperation. In frustration, Garfield frequently expressed his desire to send Nermal to Abu Dhabi.

He also frequently hurled Nermal through the door, leaving a hole in the shape of his body. This was never shown in either show, most likely because it was considered inappropriate for a children's show. Nermal especially did this on Garfield's birthdays to remind him of his advancing age. Although Nermal was introduced as belonging to Jon's parents (09-03-1979), the connection was later dropped. He is one of the two tritagonists (alongside Jon) of The Garfield Show.

Although Garfield once ceased attacking Nermal after having a nightmare where a hulking cat introduces himself as a full-grown Nermal and proceeds to brutalize Garfield, this has not actually happened. Nermal once mentioned that he is going to stay cute and small forever because he is a midget; "I think small," he once quipped, "and the coffee and cigarettes don't hurt." Another time Garfield caught Nermal "in the act" was when he sneaked up on a mortified Nermal wearing a facial mask and said "I knew it!" His first television appearance was on the Garfield and Friends episode School Daze, and his last was on The Feline Philosopher; on the show, he became a recurring cast member.

Desirée Goyette regularly provided Nermal's voice on the series, which confused viewers to think that he was a female due to the feminine voice. A running gag on the show featured Garfield mailing (or trying to mail) Nermal to Abu Dhabi, which once resulted in himself getting mailed instead. Garfield even had his own song called "Abu Dhabi", which he uses to tell Nermal all about the United Arab Emirates and how he will love it there (or rather, Garfield will love it for having Nermal on the other side of the world). When Garfield is spared a trip to Abu Dhabi himself (a stuffed cat was sent to the UAE instead) Jon demands Garfield stop threatening to send Nermal to Abu Dhabi. Garfield promises this, then makes attempts to mail Nermal to the North Pole after that.

In Garfield: The Movie, Nermal is portrayed by an adult Siamese cat in the neighborhood and Garfield's friend and is voiced by David Eigenberg. Nermal is voiced by Jason Marsden in The Garfield Show, and the movies Garfield Gets Real, Garfield's Fun Fest, and Garfield's Pet Force. Here, he sounds more like a young male cat and less feminine.

It was also revealed in several strips (published next to each other) that Nermal has had cosmetic surgery, which is undoubtedly related to his cuteness. The first strip in those involved a conversation between Nermal and Garfield starting with Garfield asking Nermal if he has ever had cosmetic surgery. It goes as follows: Nermal: You see this eyelash? Garfield: Yeah... Nermal: That's real.

Although Nermal has not appeared in the strip since 2008, he still appears in The Garfield Show. 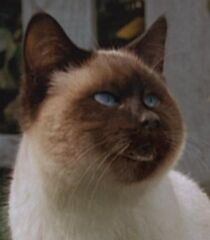 Nermal in The Garfield Movie 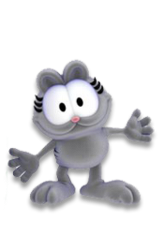 Nermal in the Garfield show
Add a photo to this gallery

Retrieved from "https://hero.fandom.com/wiki/Nermal?oldid=2283107"
Community content is available under CC-BY-SA unless otherwise noted.