Nestor is the main protagonist of Nestor The Long-Eared Christmas Donkey. He is voiced by Eric Stern.

Nestor is a little gray donkey born with really long ears that drag the ground and made him trip over every time he walks.

Every animal in the stable disliked Nestor because of his ears. One day the animals in the stable are celebrating the winter solstice. Nestor's mother gives him socks to cover his ears.

That night when Nestor is asleep, soldiers come from the Roman Empire saying they need strong donkeys. They pick a bunch of them, including Nestor, but not his mother. He tries to get away and one of the soldiers grabs the socks on his ears. They come off. The soldiers thought Olaf, the owner of the stable, was trying to trick them. He says he will give Nestor to them for free, but they are angry so they force him to give them all the donkeys for free and do not take Nestor. They leave. Olaf is angry at Nestor because he did not get any money and at the same time lost all of his donkeys, and he throws him out the door, saying that he doesn't care if he freezes to death and tells him to never come back. His mother escapes the stable and finds him. There is a blizzard going on outside by then, so she finds shelter and uses her body to cover him up. He wakes up in the morning to find her frozen to death. He cries over her loss and walks away.

A little while later, something falls out of the sky. It looks like a little girl, but one would freeze to death in the blizzard. She says she's a cherub, calling herself Tilly. She says they need to travel to Bethlehem, but she can't tell Nestor why. She only tells him a poem; "Your ears can do wondrous things no other ears can do. The sounds they hear will guide you on a path that's straight and true, and you will save another, as your mother once saved you." He disagrees at first, but she tells him that "He" wants him to. After he agrees they travel for many months across distant lands and even a sea. When they get finally get to the outskirts of Bethlehem, Tilly tells Nestor to stay there. He finds a stable to stay in and still nobody will buy him.

One day a couple comes in. Their names are Mary and Joseph. Mary is expecting a baby, and is heavy with child, so she can't walk the miles to Bethlehem and they do not have much money. They take Nestor because of his "gentle eyes". While Mary, on his back, and Joseph are traveling to Bethlehem, they are caught in a sandstorm. In its midst, Nestor hears Tilly's voice, but recognizes it as his mother's, and she tells him to follow the voices of the singing angels. He guides Mary and Joseph through the storm, wrapping Mary in his ears. They soon arrive at Bethlehem and they find a stable to stay in. Mary delivers Jesus after pushing him out with labor and Nestor finds his way back home. When he gets there, he is considered a hero and all the animals become friends with him and dance around the Nativity scene. In the present-day, Spieltoe alters a miniature Nativity scene so the donkey now looks like Nestor. 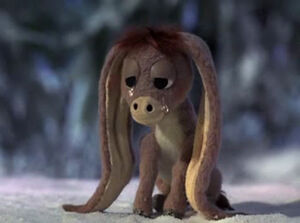 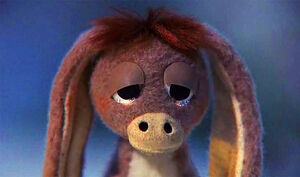 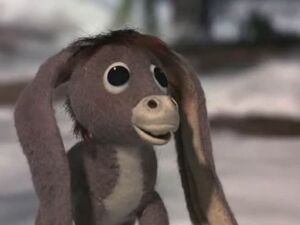 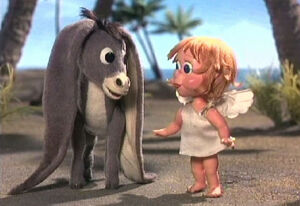 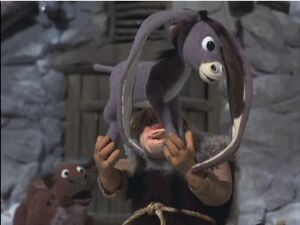 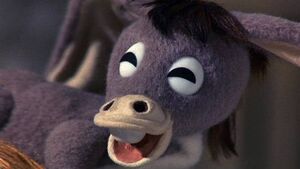 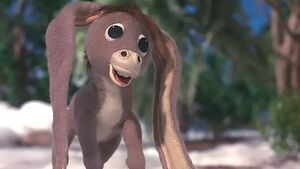 Retrieved from "https://hero.fandom.com/wiki/Nestor_(Rankin/Bass)?oldid=2044588"
Community content is available under CC-BY-SA unless otherwise noted.