Aftermath and Lost Stars (canon)
Heir to the Empire (legends)

The New Republic is a government organization in the Star Wars universe that arose after the death of Emperor Sheev Palpatine and the redemption of Anakin Skywalker which the Sith Order and its Rule of Two were fallen and the Empire had begun to fracture into the Imperial remnants.

Following the victory at the Battle of Endor, the Rebel Alliance formed a new government called the New Republic. Just over a year after the Battle of Endor, the New Republic engaged Imperial remnant forces on Anoat sector, Velcar secor, the far off worlds of Kashyyyk, Malastare, and Jakku, defeating the Imperial fleet there and leaving the remains of a number of startships scattered over the planet.

After the Battle of Jakku, the New Republic forced the Galactic Empire to sign the Galactic Concordance and the Imperial Instruments of Surrender, which brought an end to the war between the two states. The Imperials were forced to give a number of concessions, including the outlawing of torture, ceding Coruscant to the New Republic, and remaining within strictly defined treaty boundaries.

Following the signing of the Concordance and the Instruments of Surrender, many Imperial warships began informing the peaceful membership Imperial remnant in the Core Worlds and Inner Rim, and the others than began making hyperspace jumps in to the Unknown Regions of the galaxy and formed two Imperial remnants: one locked in the cold war, and the other in the Queluhan Nebula. Away from the scrutiny of the New Republic these Imperials formed a military junta called the First Order.

Becoming complacent in the apparent peace that followed, the New Republic reduced its military footprint considerably. The First Order took advantage of the New Republic's complacency and began rearming in violation of the treaty.

Meanwhile the New Republic was paralyzed by political strife between Centrists who wanted the New Republic to have a strong centralized government, and the Populists who favored a decentralized Democracy. Leia Organa was a leading populist until it was revealed she was the daughter of Darth Vader by Lady Carise Sindian. This destroyed her political career and she left the Senate not long afterwards.

Seeing that the New Republic was unwilling to do anything about the First Order, Leia helped form the Resistance to oppose the First Order. Many of her old Alliance comrades such as Admiral Ackbar joined her, along with a number of others.

The New Republic suffered a critical blow when their capital planet of Hosnian Prime along with other four planets Cardota, Courtsilius, Hosnian, and Raysho in the Hosnian system were destroyed by the First Order superweapon, Starkiller Base. This wiped out the Senate and a large part of the New Republic Starfleet: the home fleet above the planet. However, before the Starkiller could destroy any more planets in the entire systems to destroy on the next target: the Ileenium system where the Resistance base in D'Qar, a Resistance strike team destroyed the superweapon's weakness, the thermal oscillator.

As in the canon continuity, the Rebel Alliance organized itself into the New Republic following the Battle of Endor. One month after Endor, Mon Mothma declared the Rebellion to be at an end and the formation of the New Republic.

For most of its existence the New Republic fought various Imperial holdouts, such as Grand Admiral Thrawn and other Imperial warlords. Emperor Palpatine returned from the dead about six years after Endor in a clone body. He briefly succeeded in turning Luke Skywalker to the dark side of the Force and nearly toppled the New Republic before his last clone was destroyed and he was consigned to chaos for all eternity.

The following year, Admiral Natasi Daala emerged from the Maw Installation, and succeeded in reuniting the various Imperial factions into a main remnant. After she left command, Gilad Pellaeon took over command, and continued to fight the New Republic. Despite the new unity amongst the Imperials, the remnant continued to lose power and influence until it consisted of eight systems in the galactic backwater.

In 19 ABY Pellaeon came to the conclusion that it was useless to continue hostilities against the New Republic, that if they kept fighting the Empire would be destroyed but if they stopped some Imperial ideals might survive. Despite the attempts of Imperial hardliners to derail the peace process, Pellaeon was able to successfully negotiate a deal with the New Republic. After two decades the Galactic Civil War was finally over. 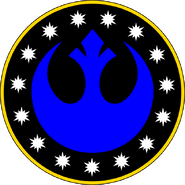