To be next generation of heroes

When Spider-Man had learned that he had inspired a new generation of kid heroes by becoming an Avenger, he convinced Nick Fury to recruit them in order to personally train them.

When Spider-Man was informed that S.H.I.E.L.D. was observing new heroes, he was able to convince Nick Fury to help them. They then set out to recruit these heroes into S.H.I.E.L.D.'s new project: the New Warriors.

A S.H.I.E.L.D group of young heroes team founded by Spider-Man, the team's primary members consists of Agent Venom, Amadeus Cho as the next Iron Spider, Ka-Zar, Zabu, Cloak and Dagger, Squirrel Girl and Triton, included a new member as Rhino (before betraying the team and turn back to normal in the Series final and rejoins the team). Pictures of Speedball, Gravity and Echo were seen on a S.H.I.E.L.D. computer screen, indicating a possibility for these youths to join, a visual also in the possession of Taskmaster in the storyline.

In Ultimate Spider-Man vs. The Sinister 6 (season 4), other new members as Scarlet Spider (Ock´s spy real, before betrayed him), Kid Arachnid, Sandman, Madame Web, Harry Osborn as American Son-like armor (under the alias The Patrioteer) and Mary Jane Watson as Spider-Woman. In finale season, other new members as Francis Beck as the new Mysterio and Vulture. The Spider-Slayers was how members of the team, but when been to Kaine was explode 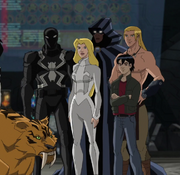