Harry Potter and the Philosopher's Stone

Caring for his fantastic beasts.

Rescue all of his missing creatures let loose in New York City before any harm comes to them.

Newton Artemis Fido "Newt" Scamander is a Magizoologist wizard who is the author of Fantastic Beasts and Where to Find Them, which is a book used in wizard homes and Hogwarts. He is also the younger brother of Theseus Scamander, husband of Porpentina Goldstein, and the paternal grandfather of Rolf Scamander. He acts as the main protagonist of the Fantastic Beasts film series (which serve as prequels to the Harry Potter book and film series, taking place 65 years before the events of Harry Potter and the Philosopher's Stone).

He is portrayed by Eddie Redmayne, who also voiced Ryan in Legend of Sodor’s Treasure and Dug in Early Man.

Newt was born on February 24, 1897, in either the United Kingdom or Ireland and developed an interest in magical creatures during his childhood as his mother bred Hippogriffs.

On September 1, 1908, Newt began attending Hogwarts School of Witchcraft and Wizardry and was sorted into Hufflepuff, but felt like an outsider. There he befriended a fellow student named Leta Lestrange, who like Newt, was fascinated by magical creatures and was an outsider.

In 1913, a student's life was endangered when one of Leta's experiments which involved a Jarvey, went too far. Not wanting to see his friend expelled, Newt took the blame for the incident, which resulted in Newt being expelled in Leta's place. Newt's Defence Against The Dark Arts teacher Albus Dumbledore protested strongly against Newt's expulsion. It is unknown if Newt was permanently expelled or suspended. Either way, he was allowed to keep his wand.

Afterwards, Newt began working at The Ministry of Magic and worked at The Department of Regulation and Control of Magical Creatures. He spent two years at the Office of House Elf Relocation before transferring to Beast Division where his knowledge of magical creatures led to a rapid series of promotions.

In 1925, Newt began a year-long world trip to document magical creatures and their habitats.

On 6 December 1926, Newt arrives in New York whilst travelling to Arizona. He sees a No-Maj (the name American witches and wizards call non-magical people) named Mary Lou Barebone and her children preaching about the New Salem Philanthropic Society (which Mary-Lou is in charge of), who view witches and wizards as being dangerous. During this, a Niffer escapes from Newt's suitcase (which has an Undetectable Extension Charm on it). Whilst trying to recapture the Niffler, Newt accidentally switches suitcases with another No-Maj named Jacob Kowalski (who wishes to become a baker). Due to the trouble caused by the Niffler, Newt is arrested and brought to the headquarters of the Magical Congress of the United States of America (known as MACUSA for short), but is released after the suitcase he has is filled with baked goods.

Newt, along with a witch named Tina Goldstein, arrive at Jacob's home and find that other creatures have escaped from Newt's suitcase. The trio then go to Tina's apartment where they meet her sister Queenie. Newt then takes Jacob into his suitcase where they encounter a parasite called an Obscurus, which develops inside the minds of magical children who attempt to repress their magical abilities and when affected, rarely live past the age of ten. The Obscurus in Newt's possession was taken from a girl who died. Newt is able to convince Jacob to help recapture the escaped creatures. Newt and Jacob manage to recapture two of the three escaped beasts before they are arrested by MACUSA (after Tina gave them Newt's suitcase), who believe that one of Newt's beasts killed Senator Henry Shaw. Newt is accused of being in league with a Dark Wizard named Gellert Grindelwald by MACUSA's Director of Magical Security Percival Graves. Newt and Tina are to be sentenced to death and Jacob's memories to be erased, but Jacob and Queenie arrive and rescue Newt and Tina and later recapture the third beast.

Later, Newt encounters Mary Lou's adopted son Credence (who was affected by an Obscurus and has lived past ten years old) and is attacked by Graves, who admits that he planned to unleash the Obscurus to expose the magical community to the No-Majs and framing Newt for it, and angrily claims that MACUSA protects the No-Majs more than themselves. Graves then attacks MACUSA's Aurors, who attempt to apprehend him. Newt manages to subdue Graves and uses a spell to reveal Graves as being Gellert Grindelwald in disguise.

When MACUSA fears that the magical world has been exposed, Newt releases a Thunderbird in order to disperse a potion as rain across New York in order to erase the memories of the No-Majs (including Jacob). Newt then leaves New York for Europe, but not before promising to return to visit Tina once he finishes writing his book. He also leaves behind a case of silver Occamy eggshells to help Jacob fund his bakery.

Fantastic Beasts: The Crimes of Grindelwald

One year after the events of the first film, Newt Scamander is at the Ministry of Magic to appeal his international travel ban. While there, he runs into Leta Lestrange, an old Hogwarts classmate and the fiancée of his Auror brother Theseus Scamander. The ministry agrees to grant Newt's request if he aids Theseus in locating Credence Barebone in Paris. Newt declines after learning he must work with the ruthless bounty hunter Gunnar Grimmson. Later, after being reprimanded by the Ministry for his recent actions, Albus Dumbledore (Jude Law) meets with Newt and is revealed to have indirectly sent him to America to release Frank the Thunderbird. Dumbledore requests that Newt travel to Paris and save Credence from Grindelwald and the Ministry; he believes he is Leta's long-lost half-brother, Corvus Lestrange.

Later, Newt is unexpectedly visited by his American friends Queenie Goldstein and Jacob Kowalski. Jacob, a Muggle, has regained his memories that were erased in the previous film. Newt is disappointed that Queenie's sister Tina is not with them; Queenie tells him that Tina is seeing someone after reading in Spellbound magazine that Newt and Leta were engaged. Newt explains that Leta is marrying Theseus, not him. Newt deduces from Jacob's strange behaviour that Queenie enchanted him into eloping to circumvent MACUSA's marriage ban between wizards and non-magical humans. After Newt lifts the enchantment, Jacob refuses to marry Queenie, fearing the consequences she would face. Upset, Queenie leaves to find Tina. Newt and Jacob follow her to Paris where Tina is looking for Credence.

Tina searches for Credence at the Circus Arcanus. Credence and captive circus performer Nagini escape after causing a distraction. While searching for Credence's birth mother, they locate a half-elf servant named Irma Dugard, who brought him to America for adoption. However, Grimmson, revealed to be a follower of Grindelwald, arrives and kills Irma. Meanwhile, Tina meets Yusuf Kama, who is also hunting Credence. Newt and Jacob follow Yusuf to Tina. Yusuf explains that he made an Unbreakable Vow to kill his half-brother, whom he believes to be Credence. Meanwhile, unable to find Tina, a distraught Queenie is found by a Grindelwald devotee and brought to him. Knowing that Queenie is a Legilimens, Grindelwald allows her to leave while manipulating her into joining him using her desire to marry Jacob.

Newt and Tina infiltrate the French Ministry of Magic for documents to confirm Credence's identity, but Leta and Theseus discover them. Newt and Tina reconcile after he explains he was never engaged to Leta. Their search for information about Credence leads them to the Lestrange family tomb, where they find Yusuf. He reveals that he is carrying out his father Mustafa's request to avenge his mother Laurena's death. She was kidnapped by Corvus Lestrange IV using the Imperius Curse and later died giving birth to Yusuf's half-sister, Leta. Leta reveals that Credence cannot be Corvus as she unintentionally caused his death; while aboard a ship to America, Leta, unable to stand his constant crying, switched her baby brother with another infant (Credence) shortly before the ship sank. Corvus drowned while Credence survived.

The group follow a trail to a rally for Grindelwald's followers, where Queenie is among the attendants and Jacob is looking for her. There, Grindelwald shows images of a future global war and rails against the laws prohibiting them from preventing such a tragedy. As Theseus and the Aurors surround the rally, Grindelwald prompts his followers to spread his message across Europe and conjures a ring of blue fire that kills the retreating Aurors and that only his most loyal followers can safely cross. Queenie and Credence both cross the fire. Leta sacrifices herself to hold off Grindelwald so Newt, Tina, Jacob, Yusuf, Nagini, and Theseus can escape. As Grindelwald leaves, the remaining heroes unite alongside the immortal alchemist Nicolas Flamel to subdue and extinguish the fire. Newt realizes he is now embroiled in a conflict with Grindelwald and chooses to fight.

At Hogwarts, Newt presents Dumbledore with a vial stolen from Grindelwald, by his Niffler. It contains a blood pact Grindelwald and Dumbledore made during their youth that prevents them from dueling each other. Dumbledore believes it can be destroyed. At his base in Austria, Nurmengard, Grindelwald tells Credence that his true identity is Aurelius Dumbledore, Albus' long-lost brother, by presenting him a wand and narrating the legend saying that a phoenix will appear to any Dumbledore in time of need, which did come to Credence, and then Grindelwald him told that he, Credence, now Aurelius Dumbledore, is the only person powerful enough to defeat him. Credence does magic with his first wand, indicating he is going to set out to kill Albus Dumbledore.

Fantastic Beasts: The Secrets of Dumbledore

Newt eventually wrote the book Fantastic Beasts and Where To Find Them, married Porpentina Goldstein, had a son with her and later a grandson named Rolf who, like him, became a Magizoologist.

By the 1990s, Newt and Tina were living in Dorest with their pet Kneazels Hoppy, Milly and Mauler. Somewhere around the late 2000s and early 2010s, they became great-grandparents after Rolf married Luna Lovegood and had two twin sons named Lorcan and Lysander.

Newt was considered by those who didn't know him to be strange, eccentric, awkward and shy, as he would spent a majority of his time caring for magical creatures. Despite this, Newton was renowned for being the master over knowledge on magical creatures, and was dedicated to his goal in protecting them. Though noted for being mostly introverted towards others, Scamander was compassionate and brave, displaying it during the First Wizarding War when co-leading Dumbledore's army against Gellert Grindewald. 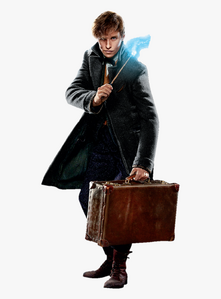 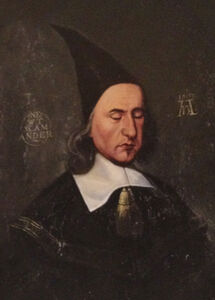 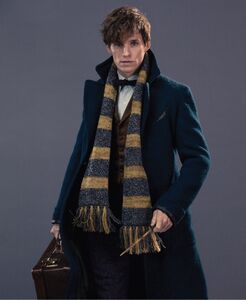 Eddie Redmayne as a young Newt. 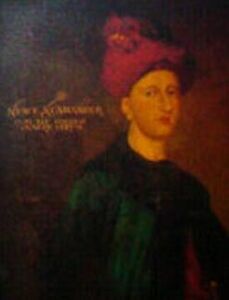 Newt as a young man. 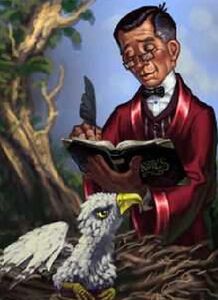 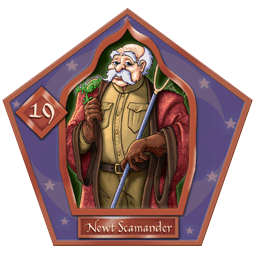 An elderly and balding Newt in a wizard card from the video games. 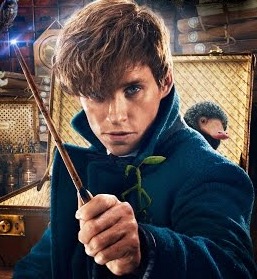