Needlework (as a human)

Sleeping (as a Demon)

Protect humanity from the demons (succeeded).
Make sure her brother doesn't hurt anyone (succeeded).

Nezuko was originally an ordinary girl born into a poor yet happy family.

The secondborn of the six Kamado siblings, Nezuko maintained a strong bond with her mother and siblings.

Tragically, however, a demon named Muzan Kibutsuji came to the Kamado household one day and murdered everyone present.

The only survivors of the massacre were Nezuko and her older brother Tanjiro who had been away at the time. Nezuko was only able to survive because Kibutsuji had transformed her into a demon. Unfortunately this meant Nezuko had a strong craving for human blood and initially attacked Tanjiro.

However after a Demon Slayer by the name of Giyu Tomioka arrived on the scene Nezuko was able to hold back her urge to devour and defend her brother after Tanjiro had tried to protect her from the Slayer. As a result of this, Tomioka spared the Kamado siblings and instructed Tanjiro to train under his former master to become a Demon Slayer himself. Although approved by the lord of Demon Slayer Corps. of continued existence, Should a day come when Nezuko ever take a life of human, then Tanjiro, Giyu and Sakonji (who guaranteed Nezuko's non-aggression) must kill Nezuko and take their own lives by committing seppuku as a restitution for her transgression. Luckily that day never came.

Miraculously, Nezuko never devoured a human and went on to accompany her brother on his quest to find a cure for her and slay Muzan Kibutsuji. Because Nezuko was injected very large amount of Muzan Kibutsuji's Demon blood, she is extraordinarily powerful for a fledging Demon.

As a human, Nezuko was a kind and caring girl, who thought of others before herself much like her older brother, Tanjiro, and was a responsible older sister to her younger siblings. Nezuko is, however, not afraid to get in harm's way, protecting her friends from Demons even after being returned to a human state.

As a Demon, however, Nezuko seems to have forgotten a good portion of her memories as a human, besides those related to her family, and thus doesn't retain the exact personality she had before transformation. She is still very caring and protective towards humans who she sees as members of her family, although this is mainly due to the influence Sakonji Urokodaki had on her while she was asleep for two years. Nezuko also retains some of her human emotions, as she has been seen to cry when sad and smile when happy, but in general she appears more detached than her human cohorts, although she is still much calmer and less malicious than most Demons.

Since becoming a Demon, Nezuko appears to have become also rather brazen, and does not seem to fear fighting; she fiercely guards her brother as well as her allies. She has also developed a strong willpower, which can be seen through her refusal to consume human flesh or blood, even in cases of extreme injury or exposure to human blood, which can be seen when she refuses Sanemi Shinazugawa after he attempts to lure her into biting him with his Marechi blood. Her strong willpower remains even when she is no longer a Demon, shown when she willingly leaps in front of Inosuke to protect him from her own brother, who had become a Demon and was attempting to kill those around him. Though she could have been killed, Nezuko did not hesitate.

On the rare occasion that Nezuko attempts speech, she has been seen to stutter a lot, which may be due to her bamboo mouthpiece, which is seldom removed, and the fact that she didn't speak for a number of years after her transformation. However, after developing resistance towards sunlight, which allows her to go outside and interact with others more often, her speech has shown signs of improvement and she is able to fully pronounce words if someone else has just spoken them or hears them repeated frequently enough. 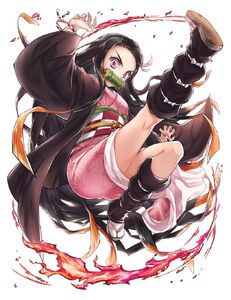 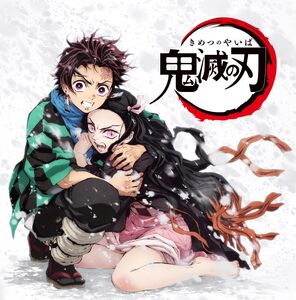 Nezuko and Tanjiro on the first key visual for the anime adaption. 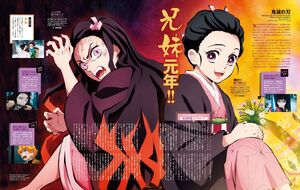 The two sides of Nezuko 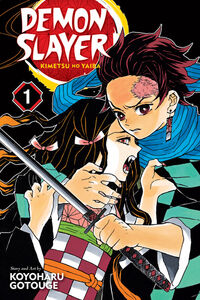 Nezuko and Tanjiro on the cover of the manga's first volume. 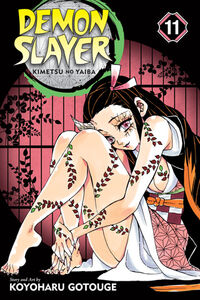 Nezuko on the cover of the manga's eleventh volume. 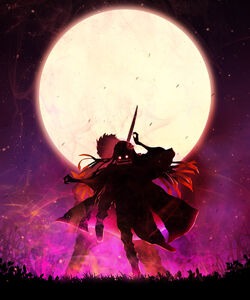 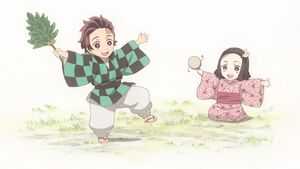 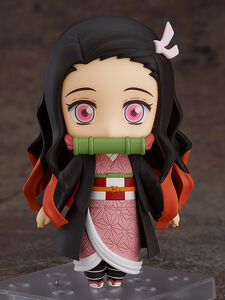 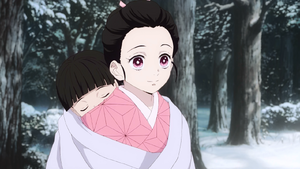 Nezuko as a human 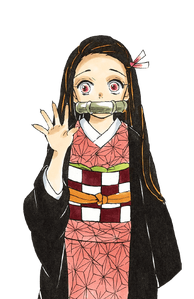 nezuko in the manga 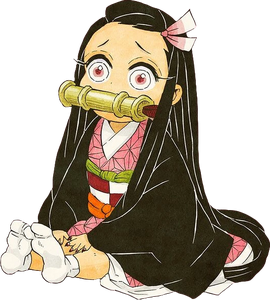 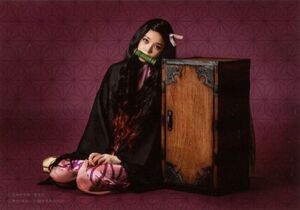 Retrieved from "https://hero.fandom.com/wiki/Nezuko_Kamado?oldid=2239333"
Community content is available under CC-BY-SA unless otherwise noted.