Rise of the Guardians

Creating toys for all kids worldwide.

To protect the children and stop Pitch Black (succeeded).

Nicholas St. North, or simply just North, ? ? ? is Santa Claus and is the deuteragonist of Rise of the Guardians. He is the Guardian of Wonder.

He is voiced by Alec Baldwin who also voices Boss Baby, Butch & portrayed as Adam Maitland.

In Rise of the Guardians

Nicholas St. North or better known as Santa Claus is the Guardian of Wonder. He first appeared sculpturing toys from ice before he was interrupted by one of his Yetis. The Yeti told him there was something wrong with the Globe and North went to check out. When North arrive to the Globe room was to find black sand around the globe and a shadow flying across. Knowing that the Nightmare King has returned, North called for the Guardians.

The Guardians shortly arrive to North's Workshop and North told them about Pitch returning. At first, they didn't believe him and Bunnymund started arguing with North since Easter was in 3 days. Sandy noticed The Man in the Moon shining from above and try to tell the Guardians but after many attempts to get the attention of the other Guardians, Sandy started to shake an elf (a bell was connected to its hat), successfully receiving attention. The Man in the Moon told the Guardians that Pitch had returned once again, resulting in him choosing new Guardian. Tooth asked them who could it be and Sandy suggested the Leprechaun. Bunnymund however started praying that new Guardian wasn't the Groundhog. When it was revealed that the new Guardian was Jack Frost, North seems surprised but pleased and Bunnymund argued that Jack didn't care about children and preferred the Groundhog instead.

North planed a way to get Jack Frost to the Workshop and eventually came with the idea of throwing him in a sac and through a magic portal. North send two Yetis and Bunnymund to find Jack. After successfully kidnapping Jack and bringing him to the North Pole, North introduce the other Guardians. The Guardians told Jack that he was chosen as a Guardian and Jack refused. Causing a fight between Bunnymund and Jack and Sandy subjected for North to take Jack away.

North told Jack that he must have something special if the Man in the Moon choose him as a Guardian and explained to him about his center. Jack didn't know what his center could be but soon they were interrupted by Bunnymund. Bunnymund told them that there was trouble in the Tooth's Palace and North got ready his sleigh and soon they made there way to Tooth Palace. As they arrive they found out that Pitch's Nightmares has taken the teeth and the fairies. Jack saves Baby Tooth from one of the Nightmares before they arrive inside of the Palace to find a panicking Tooth. Pitch then confronted the Guardians and after a battle between then he escapes.

Soon after it's revealed that the children of Earth are losing hope in Tooth, North thinking fast comes out with a plan of them collecting the teeth and with Jack Frost aboard the Guardians start their quest. Soon after a competition between them started but when Tooth told them they were as fast at collecting teeth and leaving gift as her fairies, the guys remembered that they forgot to leave a gift and had to travel back around the world to leave the gifts.

The Guardians all gather in Jamie's room but caused an uproar that caused Jamie and his dog, Abby, to wake up and see them (except Jack). Abby starts growling at Bunnymund and Jamie tries to stop her. Jack wanting to have fun with Bunnymund, makes the alarm go off, causing Abby to attack Bunnymund and make him jump around the room. Sandy, trying to put Abby to sleep with his dream sand, ends up hitting everyone except Jack, Jamie and himself. Jamie flies out of bed when North lands on it and Sandy catches him. Sandman puts Jamie to sleep and then goes to fight Pitch's Nightmares that have appeared with the help of Jack.

North was able to wake up and bring Bunnymund and Tooth to help Jack and Sandy against Pitch. Soon after Jack and Sandy were battling Pitch and his nightmares; North, Bunnymund and Tooth joined in but as the battle heats up, Pitch's Nightmares surrounds Sandy while Pitch took the opportunity to stab him, turning The Sandman into sand. Jack, anger, charged at Pitch and creates an ice wave destroying the Nightmares.

The Guardians returned to the Pole and made a memorial for Sandy. North encouraged Jack to not give up and that Sandy would have been proud of him. Knowing that they still can turn things around, the Guardians decided to help Bunnymund with Easter. Bunnymund got existed when North admitted that for the first time Easter was more important than Christmas and Bunnymund got excited about it. Soon North announced about going to the Warren in his sleigh but Bunnymund said that since it was his warren, he gets to choose the way to travel, opening an tunnel under everyone feet.

At the Warren, they find Jamie's sister, Sophie, has used one of North's snow globes to be transported to the Warren. Jack used his special skills to make Bunnymund more relax and to open up to fun, so he could play with Sophie. After the eggs were ready, Sophie fell asleep and Jack decides to bring her home.

Soon after the Nightmares attacked the Warren, destroying every egg in the Warren. Later, Jack found them but it was to late as Bunnymund tried to impress some children but it was revealed he has become invisible. When Tooth asked about Baby Tooth and where he got the Tooth Box and Jack answered Pitch, Tooth and North were shock while Bunnymund got mad at him and told the other Guardians that they shouldn't have trusted Jack.

Later, North was seen with Tooth and Bunny rushing to Jamie's house to protect the last light. North was surprised to find Jack there and more when Jamie revealed that he was able to see Jack. When Jack asked about Bunnymund, North revealed that Bunny has turn into a small bunny. Jamie laughed and asked what happened. Knowing that Bunnymund was tall and strong and now he was cute. Bunnymund thought that Jack made Jamie said that but Jamie revealed that Jack has actually helped him by keeping his believe in him. Soon Pitch appear looking for Jamie and Jack told the Guardians to go with Jamie while he confront Pitch but soon the Guardians found themselves in an ally. Jack crashes down and revealed that Pitch was stronger. With the Guardian trap Pitch started to approach them making Jamie tell Jack that he was scared. Jack got an idea and after hitting Pitch with a snowball they went to find Jamie's friend.

With the help from the other Guardians, Jamie's friends start to believe again. Pitch asks them who was going to protect the Guardians if the Guardians were protecting them. Jack reassured Jamie to not be scared since the Nightmares are just bad dream and Jamie volunteered to protect the Guardians causing his friends to join him. Pitch then sends a wave of nightmare sand their way but once Jamie says, "I do believe in you. I'm just not afraid of you!" Jamie was able to turn the nightmare sand back into dream sand. Which helps the Guardians get their full energy back and battle Pitch. North used his snow globes to bring his Yetis to help out while Bunnymund opened tunnels to get his Warrior Eggs to also help in the battle against the Nightmares while the Guardians confronted Pitch. Jamie gets an idea on how to revive the Sandman and told his friends about it.

As the battle with Pitch continued, the Nightmare King was cornered by the Guardians but hid in the shadows and appeared behind a distracted Jack with scythe created of nightmare sand, but before he could hurt him, the Sandman returns at the last second saving Jack from Pitch and uses his sand to give everyone good dreams and make more believers.

As the Guardians and the children started celebrating, Jack hits Jamie with a snowball, which caused a friendly snowball fight. North asked Jack about his center and Jack revealed he has figure it out. North gave Jack a gift of small Nesting Doll that revealed that North always knew Jack's center was fun and soon he took place in the snowball fight after Caleb, Claude and an elf hit North with a snowball.

When Pitch woke up, he tried to make Jamie fear him again but found that Jamie was not scared of him anymore because he was able to pass through him. Pitch, afraid, retreats to his lair which caused the Guardians to follow and confront him one last time. After Pitch was taken away by his own Nightmare creatures, North asked Jack if he wants to make it official and the Guardian ceremony was performed again. Jack looked at Jamie which caused him to nod. Proud of himself and of Jamie, Jack says, "I will," making him an official Guardian.

North is later seen waiting for Jack in his sleigh while he said his goodbye to Jamie. He also welcomed Jack as the new Guardian as the sleigh started to take flight.

North is a large and stocky Russian man, with white hair and a large white beard, bright blue eyes and dark brown eyebrows. He has a set of tattooes on both of his arms; "Nice" on the left arm and "Naughty" on his right arm. He wears a black fur hat, a red long coat with black fur trim along with what appears to be black, cossack-style pants and a red plaid shirt.

North is a warrior with a heart of gold. Fierce, demanding, and impulsive, everything about him is larger than life. For North, nothing is impossible as long as he believes in it.

North shows a fatherly side with Jack Frost, being one of the first Guardians to accept Jack without reservation and trying to help the young spirit find his place among the Guardians. However, he also shows he is quick to leap to judgments as he instantly believes the worst of Jack when Baby Tooth goes missing and Jack has his tooth box. Jack also helps bring out a more fun side of North when North joins the snowball fight with the other Guardians and Burgess kids and even jokes about putting Claude and Caleb on the Naughty List for hitting him with a snowball. He can be stern at times as shown when he tells Jack he holds the record on the Naughty List and when he learns that Jack has been trying to break into his workshop for years. He also displays a lack of understanding of sarcasm as when Jack sarcastically stated he enjoyed the yetis kidnapping of him with a sack, North is happy and tells him that was his idea. 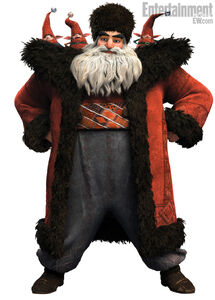 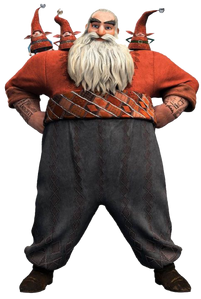 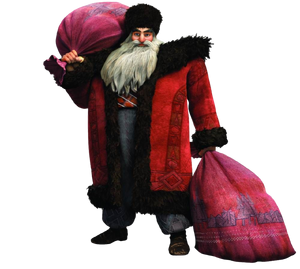