Survive the apocalypse. (both failed)

Nick is an original character who appears in Telltale Games' The Walking Dead: Season Two. He is a member of the survivors, along with his best friend Luke and his uncle Peter.

He was voiced by Brian Bremer.

Nick was born to an irresponsible father who was rarely around, and an unnamed mother. Due to this, Nick's uncle, Pete, took on the responsibility of raising his nephew. Pete felt that it was best for Nick to learn about the cruelties of the world as soon as possible. Because of this approach, Pete was often condescending and brutally honest with Nick about life and his place in the world, causing Nick to suffer low self-esteem and anger issues, which resulted in a serious strain on their relationship that continued throughout their lives.

Once, when he was about Clementine's age, Pete took Nick on a hunting trip where they spotted a roe buck. Pete was disappointed that Nick didn't want to shoot the buck, and when they argued over it, Nick's rifle went off and nearly hit Pete. Pete later went out and found the buck, killed it and took it back to his sister's house to show to Nick, after which Nick didn't speak to Pete for weeks.

He would later go into a six-month business pursuit with Luke, his childhood friend, after the latter had drunkenly suggested it to Nick. Despite his initial unwillingness, Nick would come to look back fondly on this venture, saying it had been fun.

When Clementine is brought to the Cabin, Nick almost shoots her and Pete pulls the gun out of his hands. He then accompanies Clem to the shed and complains to Luke about what they are doing. When Clementine is brought into the cabin, Nick apologizes for what he did and Clementine can either forgive him or dismiss his apology. The next day, Nick, Pete and Clem go fishing and discover corpses of survivors before being attacked by Walkers. If Clementine joins Nick, Pete dies and Nick blames her for not saving his uncle. Afterwards, the two hide in a cabin and Nick gets drunk but Clem encourages him to survive. On the way out, Nick decides to lure the Walkers out while Clementine leaves but he survives.

When the group leaves the cabin, Nick is devastated by Pete's death and Clementine is able to console him by saying that Pete loved him. When Clementine and Luke cross a bridge, they encounter Matthew and Nick, without thinking, kills the man. When the group encounters Kenny's group, Nick feels remorse for killing Matthew. He is shocked to learn that this man was Walter's boyfriend and depending on the player's choices, Nick can either confess his action or deny it. During a Walkers attack at the lodge, Nick may be left devoured if Clementine told Walter he was like everyone else. In case she says Nick is a good person, Walter will save Nick from the Walker. Shortly afterwards the survivors are captured by William Carver and taken to his base.

At the hardware store, Clem can talk with Nick about Luke's disappearance and Nick says that Luke will come back to help them and Clem says she trusts Luke too. Afterwards, Nick speaks little in what follows and with the survivors, escapes the hardware after Carver's defeat. However during the escape, Carver's men fire on the Walkers and Nick takes a stray bullet in the shoulder. Later, Clementine and Jane discover Nick zombified and Clementine apologizes before killing Nick by chopping off his head. Nick's death then upset Luke and Rebecca.

When you first meet Nick he seems to be very mean, short-tempered, and hostile but if you give him the chance to redeem himself as the game goes on Nick is shown to be heroic and remorseful for his actions. 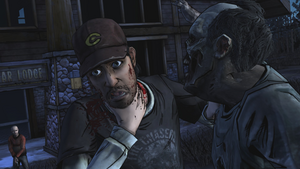 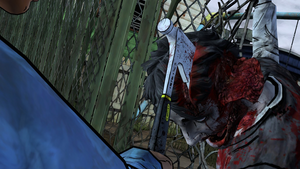