Hanging out with People

Talkig to his friends without Puberty

To escape the Pornscope (succeeded)

Escape the Department of Puberty from Kitty & the Shame Wizard.Help Andrew get away from Poop Madness and get poop pregnant (succeeded)
To defend Nick Starr and Tito from Destruction with the help from the Gratitode. (succeeded)
To see Andrew and get his love back. (succeeded)

Nicholas "Nick" Arsenio Birch is one of the protagonists and main stars of the Netflix animated series Big Mouth. A prepubescent boy living in the suburbs of New York City. He is the youngest among his friends, and has been the one to fall for multiple girls in the series so far.

He is voiced by Nick Kroll, who also voiced Douche in Sausage Party, Tippy Tinkletrousers in Captain Underpants and Sergei in The Secret Life of Pets 2.

Nick Birch was born in 2005, to Diane and Elliot Birch, as the family's third born child after the oldest brother, Judd, and sole sister, Leah. Nick's parents raised him to have a kind, loving, and caring childhood using their overemotional and overly protective parenting skills. Nick's childhood was a luxury that was not given to his two older siblings, who underwent poor and mildly abusive childhoods, as their parents were still untrained in the field of parenting at the time they were being raised. Nick and his family lived in a suburban house in Bridgeton, Westchester, New York.

In a flashback from "The Planned Parenthood Show", Nick was seen in his diaper telling jokes into a microphone that his parents got him as a gift, as they looked on in happiness, with both of them smiling and holding hands with each other.

At the start of the series, Nick Birch appears as a 12-year-old boy, going to Bridgeton Middle School. His best friends are Andrew Glouberman, Jessi Glaser, and Jay Bilzerian. Nick had not yet hit puberty at the start of the show, while his best friend, Andrew, however, has already ventured far down the hormonal road of change.

In "Ejaculation", Nick and Andrew had a sleepover and Nick accidentally got an eyeful of Andrew's penis. On top of being shocked and disturbed, Nick mostly felt inferior due to Andrew's penis being significantly larger and hairier than his. Later, Nick's parents explained to Nick that Andrew was going through puberty Elliot assured Nick that he was a late bloomer, much like himself when he was his age and that there was nothing to be ashamed about. However, this is exactly how Nick felt.

Nick asked out an attractive 8th-grade girl named Olivia to the school dance and although she initially accepted his request, she later dumped him at the dance, having already hooked up with a 9th-grade boy named Dylan. Heartbroken, Nick sat outside in the hallway and Jessi came by to comfort him. Nick leaned in for a kiss and Jessi went along with it.

At the end of the episode, Nick saw Maurice enter his room, during Andrew's sleepover and had the ability to communicate with him, signifying that puberty for him had officially started.

In "Everybody Bleeds", word got out about Nick and Jessi's kiss at the school dance and they were pressured into becoming a couple, despite the fact that deep down, neither of them wanted to be anything more than friends.

In "Am I Gay?", Jessi dumped Nick, which he was perfectly fine with. However, Nick went around the school, telling everybody that it was he who dumped her, which pissed her off. In the same episode, Andrew was questioning his sexuality and started to wonder if he was gay. Nick kissed him on the lips, which made him realize he wasn't actually gay.

In the future, Nick will change his name to "Nick Starr" and become famous as the host of a game show called Countdown to Money with Nick Starr. When he becomes famous, he's going to cut off all contact with his friends and family and live alone in a big mansion, with his only companion being a robotic version of his former friend, called the Andrew 3000.

The episode "Nick Starr" gives an in-depth exploration of Nick's future, in the year 2052.

Nick has an unusually big forehead, which is continuously doted on throughout certain times in the series. Apart from being the shortest of his friends, he also has bright blue eyes and a hook-ish nose over his upper lip. He has full lips with his front teeth being on constant display whenever he's not smiling or showing his teeth in general, which could possibly be the actual result of a dental deficiency (though not confirmed). He wears a dark blue shirt with an unbuttoned formal shirt over it, with purple pants and dark purple shoes. His appearance change is scarcely seen, with rare times of seeing him in his pajamas.

Nick is a rational, sensible, responsible young man whose confidence can take devastating effects when confronting girls. Despite Nick being sexually knowledgeable he is not comfortable in talking or being sexual around girls, and is often critical of his best friend Andrew for being a gullible, sexually perverted and naïve weirdo, which is shown in his confrontation with him at a sleepover. Throughout the series Nick's penis was publicly displayed both willingly (drunk in front of ghosts) and unwillingly (when his pants were pulled down by Lola) which made his small genitalia an extreme source of insecurity and embarrassment for him and he is often aggressive towards those who mention it. Nick himself is interested in girls; his inability to properly take initiative often leads to shortcomings and ridiculous attempts to get a girlfriend or impress Jesse. 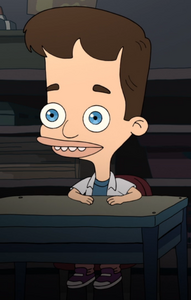 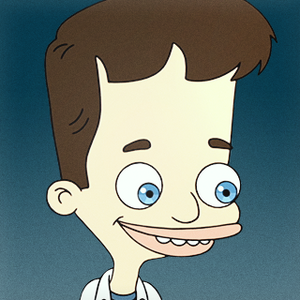 Nick Birch in the Promo card