Nicholas Clark, better known as Nick, was a main character, the former tritagonist, and a survivor of the outbreak that appears in AMC's Fear The Walking Dead. He is the son of Madison Clark and Steven Clark, who died a few years before the apocalypse. He has a sister named Alicia Clark. Nick has had a troubled past and has always chosen the wrong road. He is very down to earth but flawed individual with severe addictions to drugs, specifically heroin. Despite his flaws, Nick is a very intelligent young man, and is shown to care for his immediate family and eventually the family of his mother's boyfriend Travis after some reluctance.

He is played by British actor Frank Dillane.

"Madison's screwed up teenage son. He’s too old to stay home, too scared to flee... pretty much a parent’s worst nightmare. He has flunked out of college, had a lot of trouble, got mixed up in some bad elements, and is definitely the problem child. And it’s exacerbated for him to be next to this perfect sister who seemingly doesn’t have anything going on in her life that is negative." - Kirkman

Nick is a flawed teenager who suffers from heroin addication. This addiction often causes trouble for his family, who suffer because of this, his attempts to stop result in failure. During withdrawal he oftens spends time searching for drugs, even when its not appropriate, such as when visiting Matt Sale's house. This addiction can leave him to perform selfish acts, such as stealing Hector Ramirez's morphine IV, endangering his life.

However he can be selfless at times, such as wanting his mother to tell the Cruz family what is happening, worrying that they would be killed by the new threat or letting Griselda Salazar have his oxycontin instead of himself, due to her injury.

He is quite intelligent and quick thinking, such as being the first member of the group to realise that the infected aren't infected, but rather dead or faking a seizure to prevent Alicia from visiting Matt, as he knew he would already be infected and kill her.

Nick, as can be seen by his drug habit, suffers from an addictive personality. His mother, Madison, claims that his volunteering to go ashore with Reed in Captive was yet another addiction for Nick—that he was seeking out danger as a substitute for heroin. Nick is also impressionable and easily led by those with a stronger personality, such as Victor Strand and Celia Flores.

Prior to the outbreak, Nick struggled with an addiction to drugs, and was in and out of rehab many times. He had a difficult relationship with his father, who he believed had "changed" and become distant and was no longer fulfilling his duties as a father. During this time, Nick was often living somewhere in Los Angeles (possibly the abandoned church that became a junkie den), though often not at home with his own family. Some time prior to the beginning of the outbreak, Nick met Gloria in rehab and began a relationship with her. It was during one of these times in rehab that Nick's father was killed in a head-on collision. The loss devastated Nick and which led to his depression and relapse into his use of heroin. One of his drug dealers and friends was Calvin. Around the beginning of the apocalypse, Nick spent a lot of his time in an abandoned church with his girlfriend, Gloria, and other fellow junkies where they used substances together. 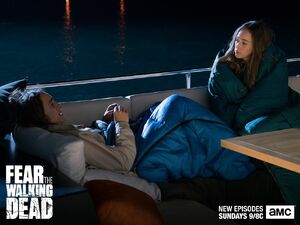 Retrieved from "https://hero.fandom.com/wiki/Nick_Clark?oldid=1704449"
Community content is available under CC-BY-SA unless otherwise noted.