Going on adventures with Vail.

Stop Ahmanet from destroying the world and killing him and all of the humans (succeeded).

Sergeant Nick Morton is the main protagonist of the 2017 horror fantasy action-adventure film, The Mummy, which is the first and only film of Universal Studios' Dark Universe series. He is a soldier of fortune and private contractor who specializes in treasure hunting and tomb raiding. He is hired alongside an American military unit in Iraq to retrieve an ancient sarcophagus from Egypt and bring it back to London. While within the region, he incidentally unearths the tomb of the princess Ahmanet and inadvertently resurrects her. Her reawakening causes their plane to crash due to a flock of crows. Not having a parachute, he is killed in the crash only to be later resurrected after being chosen by Ahmanet.

He was portrayed by the legendary actor, Tom Cruise, who also played Maverick in Top Gun, Ethan Hunt in Mission: Impossible films, Nathan Algren in The Last Samurai, and Jack Reacher in the Jack Reacher films.

Service in the military

Nick Morton served in the United States Army, earning the rank of sergeant. He eventually retired.

Morton and Corporal Chris Vail, while on Long Range Reconnaissance for the U.S. Army, discover the tomb of Ahmanet after calling in an airstrike on an insurgent stronghold. Jenny Halsey, an archaeologist who had a one-night stand with Nick and had her map stolen by him, arrives and investigates the tomb, correctly concluding that it is a prison.

After Nick extracts Ahmanet's sarcophagus from the pool of mercury, Nick's superior, Colonel Greenway, places it on a transport plane headed to England. During the flight, Vail becomes possessed by Ahmanet's power after being bitten by a camel spider while inside the tomb. After attempting to open the sarcophagus, he stabs Greenway and tries to attack the group, forcing Nick to kill him. A huge number of crows then assault the plane, causing it to crash and killing everyone on board except for Jenny, who is parachuted off the plane by Nick.

After the crash, Nick awakens a day but later in a morgue in Oxford, discovering that he has been brought back to life by unknown means, and he learns from Vail's sardonic ghost that he has been cursed by Ahmanet, who seeks to use him as a replacement vessel for Set. As he is being told this, Jenny, along with the doctors enter the morgue and are shocked to find him alive and well, as he demands to know what's going on and who's in charge.

Incident at the Bar

While Nick and Jenny are in a local pub. He was goes to the bathroom and sees Vail's ghost talking to him again. Through he warns Nick that Ahmanet has chosen him for a reason. Nick then runs out of the pub and is cornered in an alley by a whole swarm of rats. They crawl all over him as he sees Ahmanet crawling toward him, but he is snapped out of this vision by Jenny. She tells Nick what she learned from reading the hieroglyphs on the sarcophagus. She knows about Set's dagger and the jewel that must join it to complete the ritual. Jenny tells Nick about the jewel being buried with the crusaders there in London.

Nick and Jenny must go to the crusaders' tombs and they uncover the jewel from the crusader's coffin. Nick blacks out and finds himself within the church just as undead slaves capture and restrain him for Ahmanet. She inspects him and retrieves the dagger to complete the ritual, but at the last second, she notices that the ruby is missing from the hilt. Jenny arrives and allows Morton to fight and escape with her by his side. As they try to leave, they are trapped by Ahmanet and her undead slaves. Nick and Jenny fight off the undead and escape the tomb. They ride through the woods in a van and are chased by Ahmanet and the undead. An undead slave crashes through the windshield and causes the van to overturn and roll down a hill. Jenny gets trapped in the van as Nick goes to confront the mummy princess but she easily disarms him. Ahmanet tries to capture Jenny, but she is shot with a hook and is taken down. A whole team of men show up to rescue Nick and Jenny.

Nick and Jenny are taken to Prodigium, a facility located beneath the Natural History Museum of London. As Nick walks through the hall, he sees a number of artifacts, including a skull with fangs and a scaly forearm. Nick meets Jekyll, who begins to explain what he knows about Ahmanet and the forces of evil out there. Their facility is dedicated to uncovering dark forces and containing them. Ahmanet is chained up and is subdued with mercury being pumped through her veins, keeping her restrained. As Jekyll suggests that he and his facility are the only ones with the means to remove the curse, Ahmanet interrupts stating to Morton that the curse cannot be lifted. Nick approaches her and listens to her talking about the ritual she attempted to perform on her lover. She tries to sway Nick by saying he would have her by his side and have complete control over death and become a living god if he joined her.

Nick returns to Jekyll's office with Jenny. Jekyll appears to be undergoing a transformation and tries to prevent it using a serum, but Nick grabs the serum, demanding answers. A Prodigium agent pulls Jenny out but leaves Nick inside. Jekyll then turns into his monstrous alter ego, Edward Hyde. He and Nick fight, with Hyde nearly winning until he gets injected with the serum and Nick using that opportunity to knock out Jekyll.

Meanwhile, Ahmanet summons a camel spider to crawl into the ear of another agent so that he may break her free from her holds. The controlled agent then destroys the transformer box to the facility, disabling the power grid causing much destruction around the compound. Morton and Jenny are making their way through the chaos until he gazes at a distraught Ahmanet. Jenny brakes him out of the trance, which infuriates the princess. She breaks loose and takes the dagger. Nick and Jenny flee the facility as Ahmanet begins to unleash a sandstorm upon the city causing thousands to perish in the attack.

Duel in the Crossrail

However, Nick and Jenny run through the tunnels where they encounter more of Ahmanet's undead slaves. The two fight them again, with Nick crushing or ripping their heads off. They are pushed into the water by an undead but they destroy it. Nick and Jenny swim up for air, Jenny was captured by Ahmanet and drags her underwater. Nick fights off more of the undead and tries to save Jenny, but she drowns. Nick pulls her body out of the water and is confronted by Ahmanet. He continues to fight her but it leaves very little to no affect. He attempts to smash the jewel until Ahmanet once again tries to persuade him to joining with her. Nick holds the dagger out as if to give it to her, but he instead stabs himself with it, now becoming possessed by Set. Now as this new being, Set, thankful and pleased, embraces Ahmanet but just as the two share a romantic moment, he looks at Halsey's body and Nick regains control over his conscious.

He battles Ahmanet and gives her the kiss of death to suck the life out of her, reducing her back to a corpse. Nick then goes over to Jenny and brings her back to life by screaming at her to wake up. He then disappears.

Somewhere in the desert, Nick has brought Vail back to life. They ride their horses off on another adventure as a sandstorm follows them. 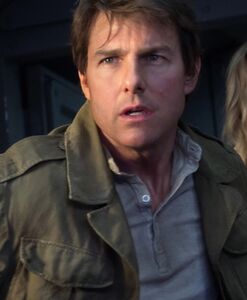 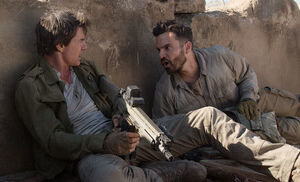 Chris blames Nick for getting him in trouble...again. 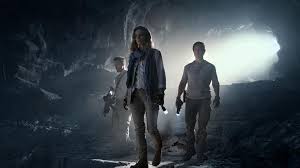 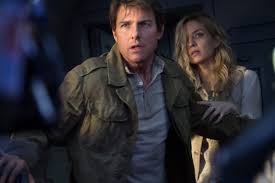 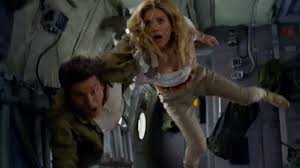 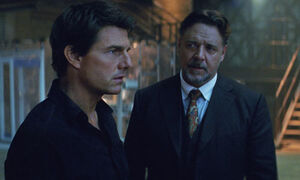