Being with Madison.
Spending time with his parents.
Fighting enemies.

Defeat Octomus the Master and all supervillains (succeeded).

The Chosen One
Nicholas "Nick" Russell (Whose real name is Bowen) is the Red Mystic Ranger and a main protagonist of Power Rangers: Mystic Force. He is also Madison Rocca's love interest.

He was portrayed by Firass Dirani.

Nick was born with his real name "Bowen". He is the son of Leanbow and Udonna. In the magical world, he was referred to as the "Light", born of a powerful warrior and sorceress, destined to defeat the Darkness. During the Great War, Bowen was fought over by Daggeron and Calindor. Luckily, Phineas brought him over to the Human World where he was raised by the Russells.

Nick grew up to be a teen who, ever since his parents have been away for business trips and other important things, he has been riding on his motorcycle from relative to relative. Nick was adopted as a baby and never knew his birth parents, and he keeps the red blanket his baby self was originally wrapped in for sentimental reasons.

Nick arrived in Briarwood to live with his sister on the same day that evil was unleashed. He was the first to volunteer to rescue the old man's brother in the forest. However, Nick did not believe in magic or enough in himself to become a Ranger at the same time that the others did. It wasn't until he had a vision of the other Rangers being badly beaten by Koragg the Knight Wolf that he returned to save them and accepted both the magic and his responsibilities.

He now possesses a strong sense of determination and duty - it was he who first decided to fight the dark armies even without his powers in Dark Wish, and who encouraged the others to continue the final battle against Morticon.

Although Nick isn't the type to hold grudges and is noted for his honour in combat by Daggeron, he makes an exception for Koragg. The Knight Wolf had repeatedly used magical telepathy to draw Nick into combat and the two had become constant rivals; during Dark Wish, Nick attempted to fight Koragg even though he possessed no magic or Ranger power. Nick has found he can use the connection in reverse, contacting Koragg. His anger regarding Koragg was strong and he once tried to fight Koragg even when he had no magic to help him. Upon discovering Koragg was really Udonna's husband and long-lost hero Leanbow, he refused to believe that his enemy could be on the side of good and was enraged by a suggestion that he was like Leanbow.

He was also quite jealous of Daggaron because he was the frog whom Maddie kissed unknowingly. Nick was adopted as a baby and never knew his birth parents, and he keeps the red blanket his baby self was originally wrapped in for sentimental reasons. He took a while to open up to the Rangers about this.

In Heir Apparent, Part II, it was finally revealed that Nick is Bowen, the long-lost son of Leanbow and Udonna, who had been taken to the human realm by Phineas for safe-keeping. He is also "The Light" - the child of the most powerful warrior and the most powerful sorceress, with the potential to destroy the Darkness forever and the primary target for the Ten Terrors.

He is currently facing conflicting emotions over the discovery and subsequent disappearance of his father and the knowledge that he was Koragg - he has said he doesn't care about Leanbow, but alone with Phineas he showed that this was not the truth. His cousin is Clare, which made her mother Niella his deceased aunt.

In the finale battle, Nick was possessed by the Master and was transformed into a new Koragg, destroying villages in the Briarwood forest. He fought his father, destroying Rootcore in the process, before Leanbow freed him from the spell by demorphing and refusing to fight, causing Nick's mind to fight off the spell rather than kill his father.

He was pushed to the limit afterward, seeing Udonna captured, the world destroyed and his father briefly killed, but was convinced by Madison that he couldn't give up and that the Rangers needed him to keep fighting; he was able to wound the Master enough to force him to retreat and, in the last clash, led the Rangers in destroying him.

Soon after the final battle, Nick along with Udonna and Leanbow rode off into the sunset on motorcycles to see his adopted parents. Nick finally believed that Maddie only loved Nick. With hints of a possible romance with Madison, Nick promised Madison he would return to Briarwood for her, leaving her with his old baby blanket.

Nick works at the Rock-Porium with the other Rangers and spends his spare time fixing his motorcycle. He never had the chance to make any real friends before moving to Briarwood and values the friendships he has - he was the first to befriend the troblin Phineas and was willing to surrender to the villain Oculous in order to save his friends.

As the Red Mystic Ranger, Nick wields the power of fire. He is always the first to rush in, using actions before thinking. Several times, he has proven to have far more innate magical power than he should, such as when he instinctively knew the spell to re-seal Morticon in the Underworld, and once being able to tame Koragg's loyal horse Catastros which may be because Koragg (Leanbow) was his father.

Nick's weapon is the Magi Staff Striker. His vehicles are the Mystic Racer and the Mystic Speeder. His Titan forms are the Mystic Phoenix and the mystic firebird he also commands Brightstar. As the Red Legend Warrior, Nick gains the Mystic Lion Staff which allows him to use the Fire Storm spell and become the Mystic Firebird. He later gains the power to combine with Fire Heart to become the Red Dragon Fire Ranger, possessing enough power to bring down an army of Hidiacs and Styxoids. 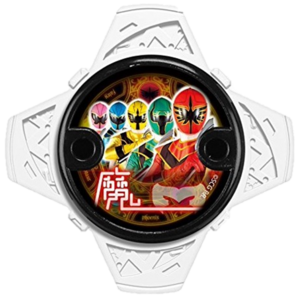