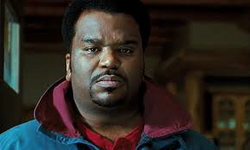 Nick Webber is one of the three main protagonists in 2010 film Hot Tub Time Machine.

He is portrayed by Craig Robinson.

Nick was the lead singer of the band Chocolate Lipstick. Nick went to Winterfest '86 at Kodiak Valley Ski Resort with his best friends Lou Dorchen and Adam Yates. During an open mic contest Nick and the rest of Chocolate lipstick performed. However, the performance turned out to be a disaster. After Chocolate Lipstick broke up, Nick married a woman Courtney Agnew, who very controlling and had an affair. Nick also had a dead-end job at a dog spa. He and Adam avoid Lou and ignore his phone calls. When Nick learns of Lou's attempted suicide, although Lou denies it, he and Courtney go to the hospital to visit Lou, along with Adam. Nick and Adam decide to take on trip to Kodiak Valley, much to Lou's excitement. However, they also take Adam's reclusive video game addicted nephew Jacob along for the trip, despite Lou's hatred of Jacob. However, when they arrive at Kodiak Valley they discover the resort is not the same as it was in 1986. They also encounter the bellhop Phil, who is embittered at the lost his arm. At night Lou tries to liven up the mood, but to no avail. Then Nick and the others discover the hot tub outside their suite. They spend the rest of the night doing heavy drinking, which includes an illegal Russian energy drink called "Chernobly".

The next morning at they wake up in the hot, tub they then go skiing, but start causing trouble skiing the down mountain.

Retrieved from "https://hero.fandom.com/wiki/Nick_Webber?oldid=1979919"
Community content is available under CC-BY-SA unless otherwise noted.