Nico Minoru is one of the main protagonists of the Hulu tv series, Runaways, and is the daughter of Robert and Tina Minoru, and younger sister to the late Amy Minoru. She is a Wiccan who learns that her parents commit ceremonial sacrifices alongside her former friends' parents, and decides to stop them.

She is portrayed by Lyrica Okano.

Nico Minoru was born in early 2001 to Robert and Tina Minoru, and is the younger sister to Amy Minoru. Her parents were the founders of Wizard, a technology company that designed electronics, and were members of PRIDE, a group that committed ceremonial sacrifices for Jonah. Due to her parents being closely affiliated with PRIDE, she befriended the other members' children, including Alex Wilder, Chase Stein, Karolina Dean, Gert Yorkes and Molly Hernandez, and also attended the same school with them; the Atlas Academy.

In 2015, Nico found her sister dead on her bed, presumably having committed suicide, and screamed in horror. Nico attempted to call 911 by using Wizey, but her mother commanded Wizey to cancel it, and knocked Nico unconscious with the Staff of One. She later awoke to realize that she was locked into her room, and overheard Tina speaking with Detective Flores, and later used Wizey to show her the video feed. Nico froze the feed to remember Flores' face, and later saw her mother staring at the camera, knowing her daughter could be watching.

Amy's death was declared a suicide, but in reality, Jonah had murdered Amy due to her looking into her mother's life. Nico attended her sister's funeral, but Alex was the only one not present there, causing her to hold some resentment towards him. Amy's death became a defining moment in her life, as she distanced herself from her friends and family, starting dressing herself in goth, and turned toward Wiccan beliefs.

After getting into a heated argument with her mother for being in Amy's room, Tina went to school and quietly listened to Alex telling his former friends that they should meet up at his mansion. Tina left and went into the bathroom, bursting into tears until she saw Karolina, and both hid their reasons for being upset. That night, Nico went to the beach and performed a Wiccan ritual to speak to her sister, but it failed, causing her to be distressed. Nico received a text from Alex that showed a photo of her with her former friends with Amy, and decided to go to the Wilder mansion.

Nico went to the mansion and met with the others, but the group began to argue until Karolina suggested they stay and talk about Amy. Nico also apologized to them for being so different from her Amy, but the group insisted she had nothing to blame herself for. While heading to Geoffrey Wilder's office to collect alcohol, Nico questioned why Alex didn't show up to Amy's funeral, but decided it didn't matter, and thanked him for bringing the group back together. Alex accidently opened a secret passageway, and the group find themselves overlooking at their parents sacrificing Destiny Gonzalez, but they had to flee when Molly took a picture.

The group ran to the guesthouse as Alex went to turn off the power, returning and telling them that it would explain the flash their parents saw. Nico expressed her belief that her parents murdered Destiny, and faked playing Twister with the others when Geoffrey and Catherine Wilder came to check up on them. After they left, the group agreed to investigate their parents, but act normal until they reunited. Nico became overwhelmed and went to the bathroom, but Alex came and comforted her.

The next day on the beach, Nico met with the others, and doubted the message Karolina received from Destiny on being in London. The group agreed that the picture could be fake, and decided that they needed more evidence, and Nico was offered by Alex to assist him in inspecting the ritual room at his home. Nico declined, as she wanted to try and study the Staff of One that was wielded by her mother during the ritual. Nico returned home and convinced her parents to go on a dinner date without her, and managed to find the staff after accidently activating the showcase it was in.

Nico used the artifact to collect Amy's diary, and found a paper snowflake, and realized that she accidently caused snowflakes to fall from the ceiling. Realizing that she couldn't stop the snowflake, Nico called Alex and after he painfully dropped the staff, the snowflakes stop. Wizey informed the two that her mother was on her way home, and Nico decided to make out with Alex to make her mother believed that was what they were doing. Later on, Nico reviewed her sister's diary, and came up with the conclusion that Amy was joyful person and had no reason to commit suicide.

Nico was invited to a WizTalk conversation with the others, and was informed that Destiny's body was founded on the beach, conforming Nico that her parents were murders. In addition, Nico also suggested that her parents murdered Amy, but the others were doubtful of that claim. The next day, Nico decided to go to the police, and Wilder decided to support her after thinking about it, but she recognized Detective Flores. The two decided to leave the police station, as they figured their parents had bought the police's loyalty, and Nico was shock to see that Alex stole his father's handgun to defend himself. The two went to the Timely Coffee to decrypt the file that Gert retrieved from Leslie Dean's laptop, and found a list of people that were sacrificed.

When Alex went to turn off a car alarm, Nico went outside and saw him being kidnapped by two unknown assailants. Nico called Karolina and urged her to come to the café to help them rescue Alex, and Karolina was scared that Alex was kidnapped by Church of Gibborim members, Nico reassured her. Nico then used the Staff of One to use track Alex's location, and Nico and Karolina met with Gert and Molly, and Karolina drove to rescue Alex. When the kidnapper stopped at a red light, Nico attempted to use the staff to no avail, and was surprised when Molly used her enhanced strength to stop the car.

Karolina then used her powers to stop Darius Davis from killing Alex, and Chase came and used his fistigons to knock Darius backward. After Darius realized that he couldn't stop them, he ran away, and the teenagers went to the Timely Coffee to celebrate. At the café, Alex returned and informed the group that he believes that PRIDE was going to sacrifice one of his kidnappers, Andre Compton. Nico agreed that their parents shouldn't get away with sacrificing another person, but when going to the ritual room, they found it empty, as PRIDE had conducted it somewhere else.

Nico comforted Alex on his frustrations on failing to save Compton, and the two passionately make out. Before the Nico and Alex could take their kiss further, Karolina arrived to tell them that Chase found a camera. The group analyzed the camera, and realized that the footage was going Nico's mother's company, Wizard. When returning home, Nico failed to place the staff without being caught, and instead of being scolded by her mother, she instead was told that she was meant to have the staff. Tina agreed to teach Nico on how to use the staff, and the two began training the next day after Alex called and asked was their plan on encrypting the file was going.

Nico met with the other Runaways and heard of their new plan: The group infiltrate Wizard headquarters while attending a fundraising gala. Nico and Alex succeed in encrypting the file from the headquarters, but had to hide under the desk when Tina returned and began weeping. Nico and Chase returned to tell Chase of their success, but Chase informed them that he saw Karolina flying, and that his mother and Nico's father were having an affair.

The next day, Nico met with the Runaways and Molly admitted that she accidently told Catherine Wilder that they saw them commit the ritual. At the open house, Nico and the group overheard the Wilder's and Yorkes talking, and figured out that they were talking about Molly. Afterward, Nico met with Alex at the Timely Coffee and demanded to know how Alex knew the password, and nearly walked out of the café until Alex admitted how he knew. He revealed that Amy had hacked into Wizard and knew that Tina had learned she did so, and Nico criticized Alex for not revealing this to her previously. Nico remembered that Amy's backpack and phone went missing upon her death, and returned home and successfully found them.

Later on, Nico met with Alex and waited for the others to come to the Timely Coffee, and was shocked that Chase and Karolina didn't want the video file to be released (as Chase believed his father would die if it was release, and Karolina wanted her father Frank to help them). Despite their refusal, Nico and Alex were determined to release the video file, and Chase and Alex got into a fight that ended when Chase destroyed the laptop and evidence.

The next day, Nico decided to postpone collecting Amy's phone when Robert was allowed to return home, and Nico went to the academy. When Alex blamed Chase for destroying their only evidence on PRIDE, Nico feared that the group would be disbanded, but they decided to stay together. the group were surprised when Molly returned from Montebello, and discovered a VHS tape that her parents left, and the group watched at the school's library. The group discovered PRIDE's plan was to dig a massive hole on PRIDE's construction site to unearth a source of energy. Nico hypothesized that Molly's parents were murdered because they attempted to warn the other about PRIDE's plan, and suggested that they flee. However, the group decided to stay and stop their parents' plans, using the school dance as a way to meet up.

Nico returned home and retrieved Amy's phone, and saw her last message was from an unknown sender (later revealed to be Leslie Dean) that a man was coming to hurt her. She called Alex to come to her home, and discussed the message and reviewed suspects for what they now knew was a murder instead of a suicide. Despite the discovery, Nico told Alex that their relationship was over, and that she hadn't forgiven him for what no telling her that Amy hacked into Wizard before her death. Before going the construction site, Karolina admitted her feelings and shared a kiss with Nico, and the two were stumbled upon Chase and Gert, who had presumably had sex.

Nico and the group managed to stop the drill, and Nico attempted to use the staff to fill in the hole, but it was confiscated by her mother. PRIDE attempted to talk their children, but the group refused to listen and instead fought their parents. Karolina ordered the group to leave as she fought Jonah, and was later defeated and captured. While hiding the woods, Nico refused to leave Los Angeles without Karolina, and the group agreed to rescue Karolina from PRIDE. Afterward, Nico and the Runaways realized that they were accused of murdering Destiny Gonzalez, and kidnapping Molly. Realizing they were wanted criminals, the group decided to go on the run. 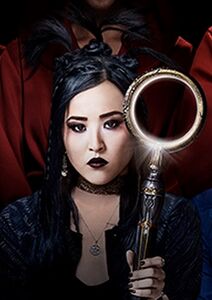 Nico on of the season one's poster. 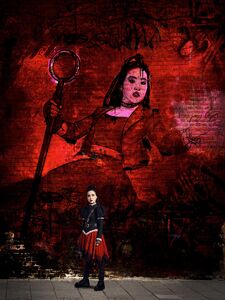 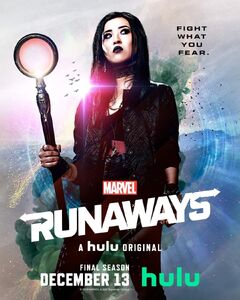 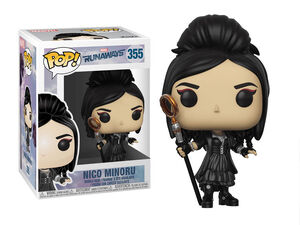