Sidekick
Nien Nunb is a Sullastan in the Star Wars franchise, first introduced in the 1983 film Return of the Jedi.

Nunb was brought to life both as a puppet and a costumed actor during the film. Nunb was puppeteered by Mike Quinn and was portrayed by Richard Bonehill in wide shots. The character was voiced by Kipsang Rotich, a Kenyan student who spoke in his native Kalenjin language, as well as in the Kikuyu language. Quinn returned to the role for the 2015 film Star Wars: The Force Awakens, the 2017 film Star Wars: The Last Jedi and the 2019 film Star Wars: The Rise of Skywalker.

Nien Nunb was an arms dealer of the Sullustan species who joined the Alliance to Restore the Republic during the Galactic Civil War. During the Battle of Endor he co-piloted the Millennium Falcon, taking Chewbacca's spot with Lando Calrissian as the pilot.

After the Battle of Endor Nunb served as a subsitute for Chewbacca when the latter was spending time with his family on Kashyyk. At first Han Solo was suspicious of the Sullstan officer even after Lando vouched for him, but came to greatly respect Nunb after Nunb saved him from a stormtrooper attack.

When Lando took over the spice mines on Kessel, Lando reached out to Nunb to come work for him in place of the slaves that had been there previously. Nunb brought a number of his people to work the mines. As Sullstans preferred underground environments, they did much better than the slaves that had worked the mines before. Nunb soon became the administrator of the mines for Lando.

Nunb had a sister named Aril, who was a pilot like him. She joined the reformed Rogue Squadron two years after the Battle of Endor, fighting throughout the Thrawn campaign, the reemergence of Emperor Palpatine, and the Yuuzhan Vong War, by which point she was an Admiral.

Upon learning that Leia Organa was the daughter of Darth Vader, Nunb sent a message of support to Leia, whose reputation had taken a massive hit due to her relationship to Vader.

A short time later, Nunb was one of the former Rebel Alliance officers recruited by General Leia Organa to form the Resistance about 24 years after the end of the Galactic Civil War. Nunb became a starfighter pilot in the Resistance, piloting a T-70 X-Wing alongside Poe Dameron and a number of other pilots. Nunb fought in the First Order–Resistance war, including the Battle of Starkiller Base and the Battle of Crait. He was one of the few Resistance fighters to esacpe from Crait on board the Millennium Falcon. He also takes part in the Battle of Exegol piloting the Tantive IV which was temporary disabled by the ressurected Darth Sidious, who attempted to stop the Resistance and their allies from destroying the Sith Eternal's fleet, the Final Order, but is being finally killed by Rey. Unfortunately, Nunb was killed by Sidious' Force lightning before Rey dueled him.

Nunb was avenged by Rey after finally killing Sidious once and for all and he can finally rest in peace. 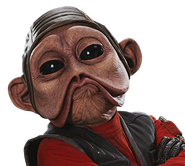