Nigel is the tritagonist from Disney's 2006 CG animated Disney film The Wild. He is an eccentric British koala who is shown to have a great dislike over toy koalas which say: "I'm so cuddly, I like you."

He is voiced by Eddie Izzard, who also played It in Five Children and It, Angus Scattergood in Rock Dog and Burnish in Abominable.

Nigel is a very feisty and charismatic koala who's recognized by the New Yorks Zoo's famous plush koala toy, which he hates intensely, and is tired of being called "cute and cuddly" by his crazed fans. However, when Nigel is abducted by wildebeests upon reaching Africa, they worship him and make him their king, and their leader Kazar dubs him as the "Great Him." Nigel soon sees the error of his ways when the wildebeests attempt to eat his zoo friends and escapes with the others. He is good friends with Larry but often angers Bridget and Samson with his mild, dry humor. He treats Ryan fairly well and has a very evident personality clash with Benny, most likely because Benny is softhearted and responsive, while Nigel is delusional and lazy, although he does mean well. He is last seen dancing on the boat with his zoo friends as it sails home, and breaks the fourth wall just before the credits roll. 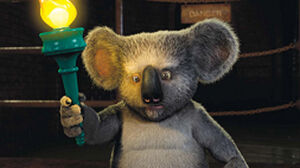 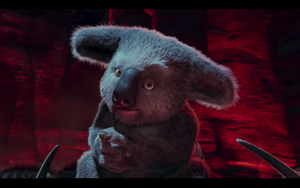 Nigel breaking the fourth wall telling them that the wilderbeests are not bad dancers.
Add a photo to this gallery

Retrieved from "https://hero.fandom.com/wiki/Nigel_(The_Wild)?oldid=1849284"
Community content is available under CC-BY-SA unless otherwise noted.