Heroes Wiki
Register
Don't have an account?
Sign In
Advertisement
in: Male, Kids, Kids Next Door Heroes,
and 42 more

Leader of the Sector V of Kids Next Door

Earth representative to the Galactic Kids Next Door

Nigel Uno also known as Numbuh 1 is the overall main protagonist of the 2002 animated series, Codename: Kids Next Door. He's the bald, British leader, and the head operative of Sector V and current Earth representative to the Galactic Kids Next Door. Described as a tactical genius by some kids and as a paranoid workaholic by others, Numbuh 1 takes his position and responsibilities as a KND operative too seriously.

Throughout the show, Numbuh 1 speaks with a noted English accent, because his parents come from England and he was born there, but then he moved to the United States when he was 3 years old. According to Numbuh 1, he, and Numbuh 2 have been best friends since Kindergarten. Numbuh 1 had a relationship with Lizzie Devine, who he considered bossy, but deeply he cared for until Operation: G.I.R.L.F.R.I.E.N.D. when they broke up.

Numbuh 1 usually wears a red turtle-neck sweater, grey shorts, white socks, and brown shoes, which acts as rocket shoes from him when he clicks his heels together. He is seldom seen without his sunglasses and most noticeably of all, he is bald.

It’s implied in Operation: F.O.U.N.T.A.I.N. that Numbuh 1's baldness was caused by the Delightful Children From Down The Lane and something to do with Numbuh 5 before she recruited him. While transforming back into a kid (when he was turned into a baby), it's seen that Numbuh 1 had brown hair, but it immediately disappeared once he was back in his normal form.

In Operation: D.A.D.D.Y., Numbuh 1 mentioned that he'd really cool hair, but it will never grow back again.

In Operation: B.U.T.T., it was revealed that Numbuh 1 had a big butt, which's considered funny to the rest of his team and the Delightful Children.

Numbuh 1's described as the stern, "workaholic leader of Sector V," as he would rather go on missions than spend his day-off at the beach as seen in Operation: B.E.A.C.H. and Operation: B.U.T.T..

Numbuh 1's one of the few operatives in the Kids Next Door that takes his missions seriously as it was seen in Operation: F.E.R.A.L. where he yelled at Numbuh 86 ("... risking my life, endangered my team and spent valuable KND resources, just to get a stupid key chain?!") when he was sent to Rainbow Monkey Island to retrieve a stone tablet with a secret code on it.

Alongside Numbuh 5, Numbuh 1's considered the only one with common sense on his team. As the leader, he's quick to jump into action and he's quite resourceful, but he tends to be paranoid to the point of stretching the truth and using his imagination when analyzing a potential adult threat.

In Operation: Z.E.R.O., it was stated many times by Numbuh 362 (who notes that he puts his team before himself) that Numbuh 1 is reckless, hot-tempered, stubborn, and acts alone. Nevertheless, he's caring and protective towards his friends, putting his full trust into them.

Numbuh 1's also a huge believer, as he;s one of the few KND operatives who believe in Numbuh 0, who turned out to be his own dad.

Although Numbuh 1;s clever, he's also shown to also be a little bit naive in Operation: D.I.A.P.E.R., as he believes that babies were kidnapped and brought to the hospital to be aged into adults, and that babies come from "baby eggs."

Now Numbuh 1's now the Earth representative to the Galactic Kids Next Door, and the events of the GKND prologue takes place a few months later after Operation: I.N.T.E.R.V.I.E.W.S..

Numbuh 1's presented with a booger-activated console that would presumably authorize or activate the destruction of Earth. Chad who's chained up, begs him not to do it, reminding Numbuh 1 that his family and friends are still on that planet and stating that this's not what the KND stands for, and also he points out the Galactic Kids Next Door's plans are pure evil.

Other GKND operatives from other planets scan in to criticize Nigel Uno, pointing out that a human Galactic-level KND operative has never existed, alluding that humans that've never been considered worthy. Only one voice steps in to defend Nigel, revealed to be Numbuh 74.239; a tree-like alien kid who had apparently been masquerading as a human all along. Numbah 74.239 begins to state that there was a famous human operative once, but then stops mid-sentence to adjust the privacy settings, and then his human disguise starts acting up.

More voices chip in to argue until a booming, multi-layered voice comes up (possibly the supreme leader), stating that only Nigel can make that decision. Shedding a tear, Nigel declares, "Galactic Kids Next Door rule!", before plunging his booger into the console. It's possible that Numbuh 1 has been corrupted, manipulated, or brainwashed to do the Galactic Kids Next Door's dirty work and they're properly just using him as their pawn.

The screen blacks out, and the dismayed voice of Number 5 'is heard saying "Nigel Uno...what have you done?". 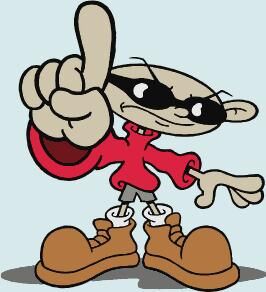 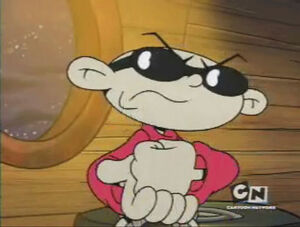 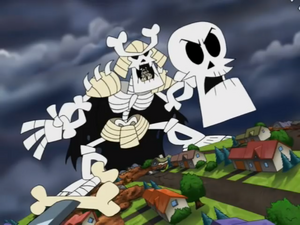 Numbah 1 pilots the giant reaper in "The Grim Adventures of the KND". 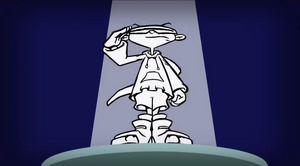 Nigel in the GKND prologue. 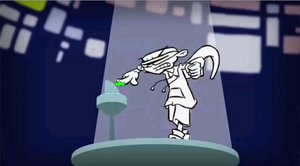 Nigel has turned to the Dark Side 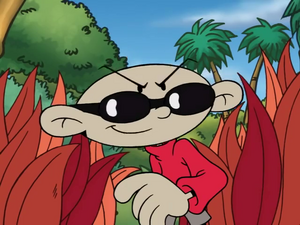 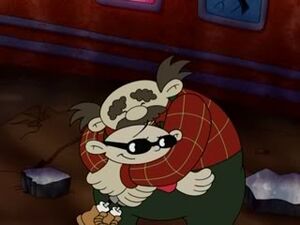 Nigel and Monty embace after saving the world. 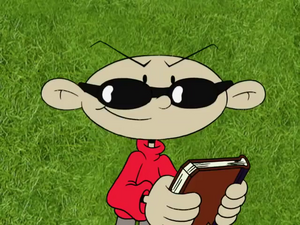 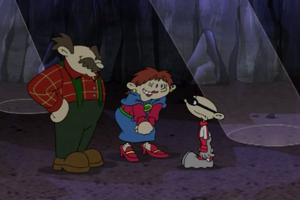 Nigel and his parents ready to part ways. 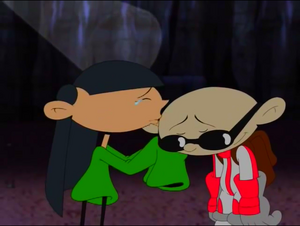 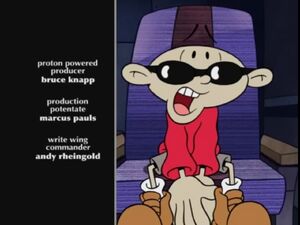