Member of the Munich Circus

Teleportation (only if he can see where he is going)

Kurt Thomas Wagner, more commonly known as Nightcrawler is one of the main protagonists in X-Men 2, X-Men Apocalypse and Dark Phoenix. His abilities include teleportation and agility and reflexes. His tail can also be used as a weapon.

Nightcrawler was controlled by Colonel William Stryker to assassinate the President. He stood undercover and watched as Alicia Vargas read a speech excerpt by Abraham Lincoln. He then raced through the White House with a combination of teleporting and running, attacking those he found on the way until he reached the Oval Office. There he jumped on the President and raised a dagger as if to stab him, but was shot by a guard - dropping the dagger and teleporting away. It fell next to the President and on it was written 'MUTANT FREEDOM NOW."

Storm and Jean Grey attempt to recruit Nightcrawler after his discovery by Professor X through Cerebro. They look after him before taking him to the X-Jet to make their way home.

Following the abduction of several students from Xavier's School by Stryker's soldiers, Nightcrawler joins the X-Men in their rescue mission. After picking up Wolverine, Rogue, Iceman and Pyro, they are threatened by jet fighters. A missile tears through the X-Jet, and Rogue is sucked out before being rescued by Nightcrawler. Just before the X-Jet crashes, everyone is saved by Magneto.

Later in the evening, Jean Grey read his mind, discovering the location of Stryker's base. He aided the X-Men with their mission to find Professor X and the abducted students. Following Jean's apparent death, Nightcrawler prayed for no more evil hoping everything will be good. Later on, he appears with the X-Men for one last time when they travel to the White House.

Nightcrawler is a religiously devoted and gentle soul. He is obviously haunted by the experiments he suffered from Stryker and the actions he was forced to do, to the point where he scarred himself for every evil action he did, in the covet of the Archangel Gabriel. Nightcrawler has grown attached to his comrades, such as rescuing Rogue when she fell out of the X-Jet and he seems to have a close relationship with Storm above all others. 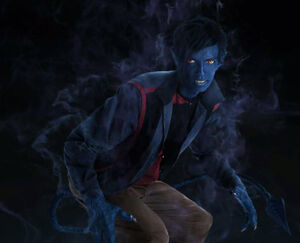 Nightcrawler with the X-Men in the Danger Room.

Nightcrawler on the X-Men Movies Wiki