Being with the Kent family.

Protect the Kent family from his father.

Nightwing (real name Lor-Zod), also known by his adopted name Christopher Kent, is a character in the DC comics and universe. He is the son of Zod and Ursa, the enemies of Superman, who adopted Christopher into the Kent family after stopping Zod and Ursa's invasion of Earth. After being rescued by Thara, he asked for his aid on stopping threats and became a crime-fighter.

He was created by Geoff Johns, Richard Donner and Adam Kubert, and first appeared in Action Comics #844 in December of 2006.

Chris Kent is the son of General Zod and was the vigilante Night Wing during Superman: New Krypton. During that story line, Superman was coming to terms with the death of his foster father Johnathan Kent; he was also dealing with the 100,000 Kryptonians now living on Earth, which he had freed from the bottled cities on Brainiac's ship.

At the end of the fourth issue of the arc, a new Nightwing and Flamebird appeared in Superman's Fortress of Solitude to stop two of Zod's followers (who were living in Kandor)from freeing Zod from his imprisonment in the Phantom Zone. Night Wing and Flame Bird accidentally got powers that are not inherent to normal Kryptonians.

Flame Bird can generate flames from her hands and Night Wing has telekinesis and were stronger than most Kryptonians. The pair started to stay in Gotham City. In Action Comics #875, that Nightwing is revealed as the son of Zod and Ursa. The "Nightwing" identity is revealed to be based on a mythical Kryptonian creature, awakening a long-dormant connection to the Nightwing, and linking his mind to that of Thara Ak-Var, who had a connection to the Flamebird.

Lor-Zod is the son of General General Dru-Zod II, and his mate, Ursa, and was born in the Phantom Zone. After creating a space vessel that could maintain a substantial form to leave the Phantom Zone, and decided to send his son into the vessel.

The spacecraft was entering Earth's atmosphere, but was stopped from crashing into Metropolis by Superman. Superman reluctantly left the child in the care of Sarge Steel and the Department of Metahuman Affairs, and everyone was stunned when he lifted a television cabinet with no effort. When the child spoke, Superman recognized that he was a Kryptonian, and scientists ran DNA tests to determinate if the child was.

Lois Lane wrote a story on the child's arrival on Earth, and news quickly spread across the globe about the child. The department relocated the child to a secure location, but didn't inform Superman, enraging the superhero, who broke the young Lor-Zod out of custody and took him to the Kent farm. Clark asked Lois if she would agree to adopt the boy with him, and she remained uncertain of her capabilities of being a mother, but she agreed, and named him Christopher.

Lex Luthor secretly monitored the department's broadcast, and sent Bizarro to capture the boy, which led a fight between Superman and Bizarro. During the fight, Lor-Zod survived an impact from a school bus falling on top of him, showing his invulnerability. Shortly after the battle, General Zod and Ursa broke free form the Phantom Zone and collected their child, and freed the rest of the criminals to invade Earth. During the invasion, Lor-Zod turned against his parents, and his parents were defeated during the siege of Metropolis. Lor-Zod was adopted by Clark and Lois, who decided to raise Lor-Zod on Earth s their foster son, and Christopher accepted his foster parents and foster grandparents.

Zod and Ursa broke free from the Phantom Zone for a second time, and they attacked Superman and his family. Zod recaptured his son as a bargaining tool to make Superman surrender, but the superhero was able to hold off Zod and his allies. Luthor's technical assistance was able to connect all of the Kryptonian's who had been in contact with the Phantom Zone and forced them to return. Seeing that the portal wouldn't close after all the criminals were returned, Christopher sacrificed himself to close the breach.

Superman contacted Mon-El on Christopher's fate, but he was informed that he was either not in the Phantom Zone, or was transferred in a very remote part of the Zone. It was revealed that Christopher was rescued by the Kandorian Thara Ak-Var, but Chris' physiology aged him to be fifteen to sixteen years old. Knowing of the emergence of Kandorians in the world would pose a great threat, Thara enlisted Christopher's aid to become a crime-fighter on Earth. The two adopted two legendary heroes, Flamebird and Nightwing, and Chris patrolled several cities in America.

During their time as heroes, Chris' growth spurt increased, as he became a twenty-three year old man. Christopher was later stalked and confronted by his mother, who wanted vengeance for betraying them to Superman. Chris refused to go by his Kryptonian name, and had to fight his mother, but Flamebird was injured. Chris took Flamebird to Earth to Lois, who he had a tearful reunion with, and later went to the fortress where he encountered his mother once again. 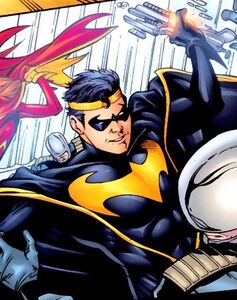 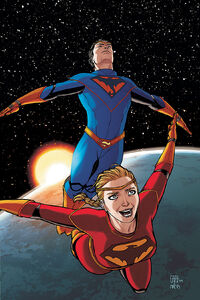