Reclaim his self-control
Protect Rachel Roth and destroy the Organization

Nightwing (real name Richard "Dick" Grayson) (formorly known as Robin) is Batman's crime-fighting partner and one of the titular protagonists of the Live-action series Titans, serving as the deuteragonist of season 1 and the main protagonist of season 2.

He was portrayed by Brenton Thwaites, who also portrayed Prince Phillip in Maleficent, Bek in Gods of Egypt, and Henry Turner in Pirates of the Caribbean: Dead Men Tell No Tales. Tomaso Sanelli portrays him as a young kid.

Dick was born to John and Mary Grayson; a pair of trapeze artists in Haly's Circus, known by their stage name The Flying Graysons. John and Mary fell to their deaths when Dick was eight, leaving him orphaned. He didn't know it at the time, but a criminal named Tony Zucco was responsible for their deaths. Dick, now an orphan, was adopted by billionaire playboy Bruce Wayne.

Boiling with grief and resentment, Dick made several attempts to run away, stealing Bruce's car to search for clues about his parents' deaths. Bruce, sensing Dick's turmoil, revealed himself as Batman - the cowled scourge of Gotham's underworld - and offered Dick a position as his sidekick, Robin.

During this time, Dick befriended Hawk and Dove, forming a strong friendship despite Bruce finding their methods excessive. Dick pursued a relationship with Dove, but it ended in both resentment and jealousy. Dick also befriended Donna Troy, and bonded over being the sidekicks of the Justice League members, and she inspired him to be better.

In 2016, Robin learned that Zucco was his parents' killer, and the Boy Wonder had him arrested. Despite this, Zucco was released on account of providing the police valuable intelligence on the Maroni Crime Family. Angered, Robin ambushed Zucco and beat him repeatedly, and the criminal was fatally shot by an armed Maroni as Dick watched. 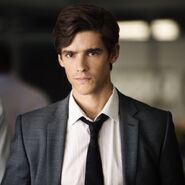 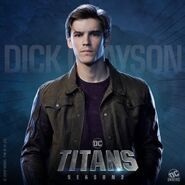 Dick Grayson in season of Titans. 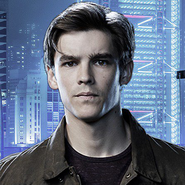 Dick in his Nightwing suit.
Add a photo to this gallery

Retrieved from "https://hero.fandom.com/wiki/Nightwing_(Titans_TV_Series)?oldid=1866226"
Community content is available under CC-BY-SA unless otherwise noted.