Aid Raiden in his quest to protect Earthrealm.

Nightwolf (real name Grey Cloud) is a Native American historian, shaman and a hero from the Mortal Kombat series of fighting games.

Nightwolf received a vision from Raiden that warned him of Shao Kahn's coming invasion and merging of Outworld and Earthrealm. As such he was fully prepared for it, as well as the attacks by the extermination squads. Using his shaman powers, Nightwolf created protection for his homeland and was soon joined by the other chosen warriors. They set out to battle Shao Kahn and his minions and defeated him, saving Earthrealm.

In the events that led to Onaga's return, Nightwolf received visions of the Dragon King and his resurrection, which he realized was a warning. The shaman continued to receive the visions in his dreams and knew that a new threat was about to arrive. After seeing a vision of Reptile's transformation into Onaga, Nightwolf knew his predictions had come true.

To defeat the Dragon King, the shaman decided to use an ancient ritual that his forefathers had passed down. This was known as the "Sin Eater", which required Nightwolf to take on the sins of his tribe, but at a terrible consequence. If the shaman did this, he would be a danger to all, even his allies so he decided that he had to do it on his own, so as not to endanger his comrades. Nightwolf's role as Sin Eater would bring him to the Netherrealm, where he would draw Onaga's soul to him and release the sins of his ancestors, which would bind the Dragon King's soul to the spot.

After Shujinko brought down Onaga, Nightwolf put his plan into action and succeeded, separating Reptile from Onaga, who he bound to the Netherrealm. Ironically, Shujinko, who had once studied with the shaman, helped Nightwolf to defeat the Dragon King.

With the shaman's quest complete, a pack of wolves, his spirit guides, guided him back to Earthrealm. However, Nightwolf began to receive more visions of a battle where an unknown force forced the warriors involved to battle each other. As his visions started to become a reality, Nightwolf spoke with Johnny Cage and their allies, agreeing to help them in battle with Shinnok and his forces. The shaman later met with Kitana who was with the spirit of Liu Kang, thanks to the bond between them, which kept his spirit whole until they could find a way of restoring him to his body. Though still drained from his battle with Onaga, Nightwolf used what magic he had left to become Liu Kang's spiritual anchor himself.

In his ending, Nightwolf defeated Blaze, gaining his power and catapulting him into the spirit world. There he became the ultimate shaman, a living ghost. With his new abilities, the shaman found Liu Kang's spirit and guided it back to the physical world, allowing his friend to reunite with his body, thus becoming human again.

Nightwolf is completely in tune with everything spiritual, being a shaman and can create a bow and arrow made of spirit energy to use as a projectile attack against his foes. He also wields a pair of tomahawks that he can charge with etheral green flame and is able to summon a bolt of lightning from the sky, charge forward and knock his opponent back, and purify anyone of their sins. Nightwolf also has a close bond (and a fitting one considering his name) with wolves and is able to speak to them. 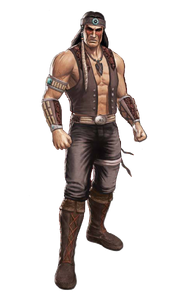 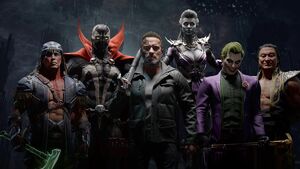 Retrieved from "https://hero.fandom.com/wiki/Nightwolf?oldid=1736263"
Community content is available under CC-BY-SA unless otherwise noted.