Get away from his troubled past.
Seek vengence on Darko Brevic.
Hunt down Dimitri Rascalov.
Hunt down Jimmy Pegorino.
Get away from his criminal life.
Kill all of his foes. (all succeeded)
Saving Roman. (determinant)
Dating Kate. (failed)
Saving his family. (partially failed)
Living the "American dream". (ultimately failed)
Avoid the prison.
Running the company. (ongoing)

Niko Bellic (in Serbian: Нико Белић) is a main character from the Grand Theft Auto's franchise, appearing as the main protagonist of Grand Theft Auto IV, a supporting character in its extensions The Lost and Damned and The Ballad of Gay Tony, and is mentioned by both Lester Crest and Packie in GTA V.

Althought having committed many villainous deeds, Niko is shown to be very protective and nice towards his family and friends, and is one of the most kind GTA's protagonist. Aside his "jobs", he displays a nicer behavior, helping poor NPC's for instance.

Niko is a quite tall caucasian male in his thirties. He has dark-brown hairs, brown eyes and a tiny bear. He usually sport a stern, emotionless look.

His casual outfit is a brown jacket, dark-grey trousers and brown shoes. However the player has access to several outfits as he/she progress: a medical outfit (which Niko use to kill Anthony Corrado), an expensive suit (which Niko use during official events such as the Roman's wedding), an outfit from the "Statue of Happiness" or even Claude's outfit (from the hero of Grand Theft Auto III). He also can wear a bataclava (from the bank robbery).

At first, Niko appears to be a humble, but very cold assassin, who take most orders without the slightest redundancy. Most of times, he seems emotionless, only expressing anger whenever he faces his enemies. Despite his coldness behavior, he can be friendly and a loving individual (such as with Kate). He's incredibly protective towards his relatives, especially his cousin Roman, whom he saved his life more than one time during the storyline. He frequently enters in a terrible anger whenever his cousin or close friends are threaten by somebody (usually criminals), and once this happens, he becomes a reckless, determined and merciless killer. Unlike most GTA's protagonists Niko is not greedy by nature, and do not seek money.

Niko's biggest weakness is his inability to let go of the past - which causes him much aggression when the issue of finding his betrayers comes up; Niko is criticized by many of his friends and most notably Roman, for this weakness. However, Packie knew his feelings and often show compassion, as well as Kate. Additionally, one of his main traits is his cynicism and nihilism, which he acquired from the Yougoslavian's war. He dislikes politics and the greedy mannerisms of Roman (saying for instance "capitalism is a dirty business" after saving the latter from the Albanians), as well as the american society, which he finds hypocrite and extremely materialistic. However, he does not wish to return to Serbia due to the extreme state of disrepair of his home country.

Deep down, Niko is an insecure and confuse man who just seek affection from his relative and peace in his life, as he just want "Roman back" if the latter die after the Deal. Nevertheless, Niko can be very bloodthirsty as, like every GTA's protagonist he can kill dozens of people without the slightest remorse, but is definitely not a barbarian. However, he has absolutely any fear as he is willing to confront dozens of armed henchmen to save Roman or fighting highly trained NOOSE's agents to defend the crew during the robbery. In fact, he's very wrathful, and is willing to kill those he consider as betrayers, threats, arrogant dimwits (such as Vlad Glebov), or anyone who stand in his way, including "innocent" police officers; there is a few characters, however, that the player can spare but also kill as well, like Darko Brevic. He doesn't like to liar, but is sometimes willing to keep the truth for himself, even if such attitude unfortunately lead to hypocrisy, which he ironically finds repulsive.

Like many in-game's characters he has sociopathic tendencies as he does not show remorse for the people he smuggled, sold or killed at the end of the storyline (and during free roam), but is genuinely sorry for Packie if his sister is killed during the wedding. He's also far less psychotic than Claude Speed or Trevor Philips.

Interestingly, Niko almost always refuses alcohol when it is offered to him (he asks for water in the mission Ivan The Not So Terrible) except for the mission The Holland Play where Playboy X pours him a glass. Niko goes to drink it, but changes his mind and puts the glass on a table. There is a scene where Niko does drink a glass of vodka (on the rocks) in the mission One Last Thing, while talking to Jimmy Pegorino, but this is understandable considering what he had just been through.

At the end of the game he definitely left his criminal's lifestyle, and now just officially work as the manager of the Bellic's Cab company (co-manager if Roman is alive). Despite this, some of his internal wounds have not healed and some of his deeds and atrocities that he witnesses continues to haunt him, even if he successfully got away from his troubled past.

Niko's Father: It is mentioned that Niko's father was an alcoholic and very abusive father.

Niko's Brother: During one of friend activities with Packie, Niko mentions his deceased brother. It is unknown how or when he died but his death likely occurred during the war.

Milica Bellic: Niko does love his mother. One proof is that even if the player chooses to respond negatively to her e-mails, Niko will send a positive response to her, which shows that he genuinely cares for his mother and does not want to upset her.

Roman Bellic: Roman is like a brother for Niko, and the latter is very protective towards his cousin, despite all his lies. After Hostile Negotiation, their relationship knew a drift but they remain good friends. If Roman die, Niko will regret the good times with his cousin.

Little Jacob: Little Jacob is the best friend of Niko. The two are very protective each others, and Little Jacob is always willing to help Niko on missions, as well as the reverse. The two does not talk about their past deeds but usually philosophical topics. Several times, Little Jacob offered Niko drugs but the latter always decline. If their friendship reach 70%, Jacob will sell low price weapons for Niko.

Brucie Kibbutz: Niko doesn't really like Brucie Kibbutz, which he assimilate, at least in the beginning, as an idiotic dimwit. Despite this, Brucie consider Niko as a "true friend" and the two remain friends. If their friendship reach 70%, Niko can do races for Brucie.

Patrick McReary: the two doesn't get along very well at the beginning, but eventually became very good friends after Niko save his life several times and did a good job at the robbery; however Packie doesn't assist Niko at the end of the story. If Kate died, Packie will call Niko, crying over his sister's death. If their friendship reach 70%, Niko can call Packie to get a bomb.

Dwayne Johnson (determinant): if Niko choice to kill Playboy X and hanging out with Dwayne Johnson, they will become very good friends. Unlike Little Jacob, Dwayne often talk about his past; Niko often relate, as the two were poor since their young and had horrible fathers. Dwayne doesn't assist Niko in his side missions but he can send two henchmen as backup for Niko once their friendship has reached 70%.

Dimitri Rascalov: at first, Dimitri seemed to be a good and friendly guy, although cold and unpredictable, so Niko started to befriend him. Even after his betrayal, Niko tried to be compassionate, as he knew that Dimitri suffered for years within Mikhail's influence. However, once Rascalov kidnapped Roman, Niko realizes his greedy and treacherous nature, and swore that he will "cut off" his face and destroy his gang. He expresses absolutely no remorse towards his nemesis when the latter beg for his life, if the player chose to cut the deal out and hunt Rascalov on his boat.

Jimmy Pegorino: at first, Niko treated the Pegorino's don with respect, although he quickly finds him egomaniacal and obnoxious; but when Jimmy betrayed Niko, the Serbian chased him until until he either kills him or witnesses him being executed by Rascalov (in the Deal's ending).

Ray Boccino: Niko instantly disliked Boccino, as the mafioso literally called him "a punk" and treats him as a mere subordinate.

Niko quickly becomes one of Grand Theft Auto's mascot and one of the most appreciated and beloved protagonist of the franchise. His dark, gritty past, combined to his sad ending appear as a stark contrast to the happy ending from the previous opus Grand Theft Auto: San Andreas; as such, Niko is often qualified as the symbol of the renewal and maturity of the franchise.

IMPORTANT: for the readability of the article, please do not add more instances. 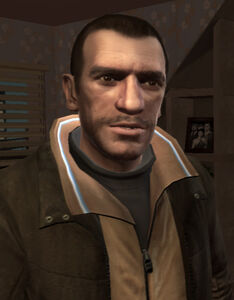 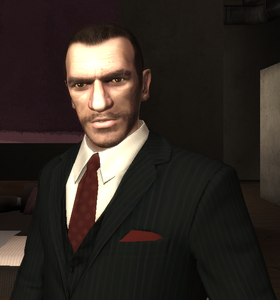 Retrieved from "https://hero.fandom.com/wiki/Niko_Bellic?oldid=1763936"
Community content is available under CC-BY-SA unless otherwise noted.