Leader of the Loyalists

Nikolai (Russian: Николай) is a major character in the Call of Duty: Modern Warfare series. He was a Russian informant for the British S.A.S. and later supporter of John Price and John "Soap" MacTavish in stopping the Russian Ultranationalists and Vladimir Makarov.

He was voiced by Sven Holmberg in Call of Duty 4: Modern Warfare and Call of Duty: Modern Warfare 2, and Robin Atkin Downes (who also played Tenzin in Uncharted 2: Among Thieves, and voiced Minh Young Kim in the Gears of War series, Kazuhira Miller and Roy Campbell in the Metal Gear series, Cham Syndulla in Star Wars: The Clone Wars, Rico Rodriguez in the Just Cause series, Michael Becket in Fear 3, Hoot Loop and Blades in Skylanders, Medic in Team Fortress 2, Yasha in Asura's Wrath, and Travis Touchdown in the No More Heroes series) in Call of Duty: Modern Warfare 3.

In Call of Duty: Modern Warfare 2 Campaign Remastered, he was voiced by Boris Kievsky, who also voiced Dimitri Petrenko in Call of Duty: Black Ops, and played Nikolai Belinski in the 2011 short Nazi Zombies: I Think We're Alone Now.

Nikolai was born in August 1969 in the USSR, and later joined the Soviet Army, and was part of a anti-tank rifle unit. He rose to the rank of senior sergeant, and participated in the Soviet-Afghan War, and was pilot during his military service. After leaving the Soviet Army, he became a double agent for the British S.A.S. and became the leader of the Loyalists, a group of Russians who went against the Ultranationalists. Nikolai later considered Yuri his best man of the Loyalists, and knew of hatred of Vladimir Makarov.

The Black Hawk helicopter carrying the team was shot down by the Ultranationalists, but Nikolai, Price, Gaz, Soap and SAS soldiers survived and continued their way while dodging soldiers. The team get the aid of a AC-130, and are evacuated in a second helicopter to a safe house in Hamburg. Later on, Nikolai sends the SAS coordinates to Khaled Al-Asad's safehouse in Azerbaijan.

John "Soap" MacTavish, now captain of Task Force 141, is left stranded with his team in Brazil, since the United States were barred from entering Brazilian airspace due to the Russian invading the U.S. Soap calls Nikolai to extract them from Brazil, and they succeed in escaping despite Roach having to run back to the rooftops.

After General Shepherd's betrays Task Force 141, Price calls Nikolai to rescue him and Soap from the Boneyard in Kandahar, Afghanistan. After being extracted, Price and Soap decide to kill General Shepherd, and Nikolai drops them off at Site Hotel Bravo. Despite being told that it was a one-way trip, Nikolai returns to rescue Price and a wounded Soap, who killed Shepherd. When Price asks Nikolai can they get out of there, Nikolai responds that he knows a place.

Nikolai takes Price and Soap to his safehouse in Himachal Pradesh, India, where he has a doctor work on Soap before Makarov's forces attack. During the attack, Nikolai has Yuri work with Price as he carries Soap to his helicopter, succeeding despite Yuri nearly being killed by a Russian helicopter.

Nikolai later aids the group when capturing Waraabe in Somalia, flying a hind and giving Yuri a remote to give him targets to kill. Nikolai's hind is shot down when attempting to extract the group, and is rescued by them before the Somali Militia can kill him in a sandstorm. Price, Soap and Yuri later attempt to assassinate Makarov, but is compromised, and Soap's wounds re-open, causing him to die of blood loss. Soap's final words is that Yuri knows Makarov, and Price interrogates him, learning that Yuri was Makarov's friend until he ordered a nuclear device that killed countless people.

Nikolai helps Price and Yuri deploy in a raid at Karlstejn, and informs Delta Force of Makarov's hunt for the Russian president's daughter, Alena Vorshevsky. After the United States and Russia agreed to talk about a peace treaty, the Third World War ended, and Nikolai assisted Price and Yuri in killing Makarov.

Nikolai appears in the 2019 reboot, Call of Duty: Modern Warfare, being referred to as an "old comrade" by Captain John Price. He assists in helping Price capture The Butcher, and the SAS and Farah Karim's forces to kill General Roman Barkov, and destroying Barkov's gas factory.

He is voiced by Stefan Kapičić, who also voiced Colossus in the Deadpool films. 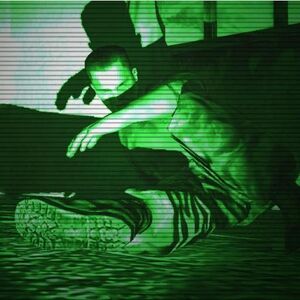 Nikolai in Call of Duty 4, in the mission "Blackout". 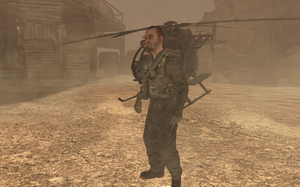 Nikolai in Modern Warfare 2, in the mission "Endgame". 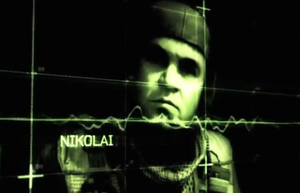 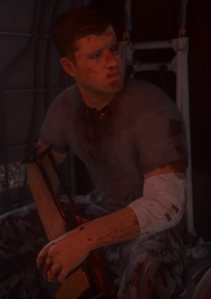 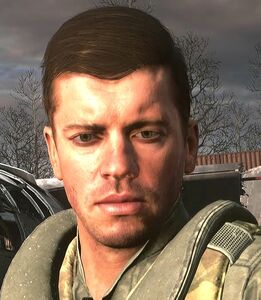 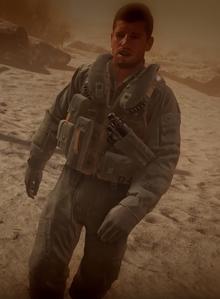 Nikolai at the end of "Endgame" (remastered).