Nikolai Mikhalovich Fedorov (Russian: Николай Михайлович Фёдоров) is one of the characters in the live action movie Predators, played by Oleg Taktarov. He's a Russian commando from the Spetsnaz Alpha Group who was fighting in the Second Chechen War before being abducted and dropped on the hunting reserve planet. He has two sons and uses an M134 Minigun as his main weapon until it's destroyed by the Super Predators. He's shown to be one of the kindest humans shown in the movie, in addition to Isabelle. He takes it upon himself to look after Edwin, the only noncombatant of the group after the doctor prevents him from touching a highly venomous plant. While saving Edwin from the Tracker Predator in Noland's hideout, he's mortally wounded by the Predator. He uses mines to kill both himself and the Tracker Predator. 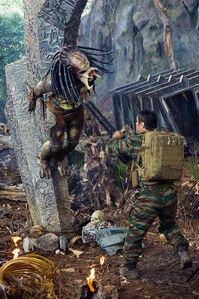