Start a Wiki
Nina is one of the mian characters in the Breath of Fire series of RPG created by Capcom.

During the course of the games, every single Nina incarnation served as one of the main female heroes, as well as one of the main characters and a love interest for Ryu, although the relationship between them usually remains unknown.

Much like Ryu, all of her incarnations (with the exception of the Dragon Quarter one) share two of their most common traits: Blonde hair and wings. The first four Ninas resemble each other on the fact that they're part of the Winged/Fae clan and heiresses to the throne of the Wyndia castle, effectively making them princesses, as opposed to Dragon Quarter, where she's neither a princess or has natural wings.

In the sixth game, Nina has completely lost her wings due to the clan abandoning their original traditions, becoming less capable of flying/gliding with each passing generation.

Nina is part of the Wing clan located in Wyndia, which as stated before, specializes in flying and morphing into birds to fly greater distances.

In battle, she has a affinity for magic, specializing in elemental manipulation, defensive spells and healing techniques.

Breath of fire I

In the original game, Nina is introduced in her hometown of Wyndia (or Winlan in the U.S. Version). The king of Wyndia, her father, was poisoned due to his decision not to ally with the Dark Dragon clan by the Wizard of Karma. Nina sets off alone to force the wizard to give her the remedy for the poison and along the way is joined by nameless Wyndian guards. In the Japanese GBA version, the two guards are named after Jiiku and Rai, two characters from the doujinshi "Princess of the Wings", which takes place after the events of the game. They successfully make it to the tower of Karma but are quickly immobilized by Xeon Gas, which is deadly to the Wing clan. One of the guards escapes the tower mortally wounded and flies back to Wyndia to help rescue Princess Nina. Ryu is unaffected by the Xeon gas and saves Nina. The pair return back with the Remedy and cure the king's poison. Nina then joins Ryu in his journey.

Later on in the game when the party must save the people of Carmen, Nina attempts to put the time key in at Tock, causing a portal in time to open and swallow her. She is sent years in the past to Tunlan, where she developes Amnesia and is cared for by a couple there. By the time Ryu and party find her, she has aged a few years. With Jade's help (unknown to them), they cure her condition and she rejoins the party with the ability to become the Great Bird. At the game's conclusion, she is the last companion to leave Ryu's party

Unlike our heroine in the first game, this Nina has a pair of black wings and has been exiled from her home country of Wyndia. According to legend a child born with black wings to the royal family will cause misfortune to Wyndia. In order to protect the country, the child must be killed, as mandated by law. Thus when Nina grew wings, they were black like in the legend. Unable to kill their beloved daughter, the King and Queen told the country she was dead and sent her off to the Magic Academy in Hometown, forbidding her to come back in order to protect her from people who knew of the legend. Because of her painful past, Nina is shy, distant, and has little confidence in her skills. Despite this, her shyness and distance seems to degenerate as the story unfolds. Throughout the game, Nina begins to become more forthcoming with her personal feelings when speaking to Ryu.

New to the series is the introduction of the third Nina whom we meet as a child. She continues the tradition of Nina II by being an offensive magic caster. However, she does not have wings in the beginning of the game. Feeling pity for the young child Ryu after being abused in an effort to make him turn into a dragon by Balio and Sunder in front of the King and Queen of Wyndia, Nina decides to release him from the castle jail. Nina is very young and naive, so Balio and Sunder trick her into unlocking their cells where they then capture her to use her for ransom. Ryu quickly saves Nina, hiding from Balio and Sunder until they escape into the city through the castle graveyard. Throughout the first quarter of the game they are chased by the two stallion brothers, meeting Momo along the way. They eventually are caught again by Balio and Sunder and forced to fight in the tournament to reclaim their freedom using Momo and leverage. Ryu meets and duels Garr, where he loses, but is given his freedom per the winner's request. Ryu, Nina, Momo and Garr fight and defeat Balio and Sunder later on the bridge.

Because she was mostly sheltered living as a princess, Nina can come off as a bit naive. Regardless, she is kind and possesses a strong determination to accomplish her goals in finding her missing sister Elina and help Ryu. Some of her personal thoughts are used to narrate the story. Nina admires her beautiful sister, and desperately seeks to bring her home.

Unlike most of her previous manifestations, this Nina is shown to openly express more that she cares about the struggling Ryu. When empire forces slaughtered a village of innocents, the sudden surge of anger in Ryu triggered the awakening of his Kaiser power. He went on a nearly uncontrollable rampage and easily decimated the empire forces. Nina, knowing full well at how dangerous it was to approach Ryu at the time, was brought to tears and completely disregarded her own safety and rushed towards him. She managed to calm Ryu by throwing her arms around him, begging for him to cease his actions. Shortly after this, she learned the reason behind Ryu's uncontrollable rage: he was incomplete. From this point on, she realized that next to finding her sister, helping Ryu was also her top priority.

In Breath of Fire: Dragon Quarter, Nina is a victim of a experiment that surgically grafted Air Filters into her back. To keep the experiment secret, she also had her vocal chords removed which made her the mute character instead of Ryu. Due to being a prototype model, Nina's body can't handle the air purification process and she is slowly dying. The injustice against her is what spurrs Ryu into defying the corrupt government and traveling to the mythical surface in the hopes he can save Nina's life. 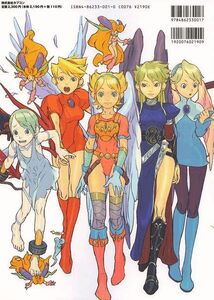 Retrieved from "https://hero.fandom.com/wiki/Nina_(Breath_of_Fire)?oldid=1733962"
Community content is available under CC-BY-SA unless otherwise noted.