Selling items in her store

Shopkeeper
Nina is the shopkeeper of Dragalia Lost and a friend of Euden.

She was voiced by Natsumi Hioka in Japanese and Katrina Salisbury in English.

She is not to be confused with the similarly named Nino.

Her summer variant wears a sleeveless blue and white dress and white opened toed heels. She wears a white headband with blue ribbons and her wrists has blue wristbands. Her braided pigtails have white ribbons instead of blue.

Her anniversary variant consists of a yellow dress with a dark corset, black stockings, and pink ribbons.

Her Christmas attire consists of a red dress with white lining, a black corset, and a mistletoe hairpin.

While Euden was visiting her shop for supplies, a band of gangsters invade the store. Fortunately, Nina was able to find them off on her own. 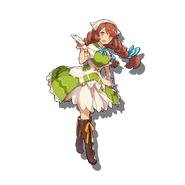 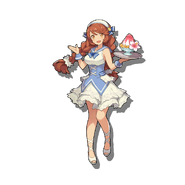 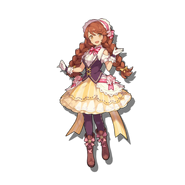 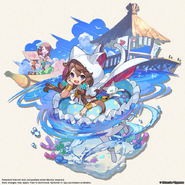