Antagonistic Anti-Heroine
Nina Cortex is the niece of Dr. Neo Cortex and an enemy of Crash Bandicoot. Despite this however, she has helped her foes save the world on occasion either out of circumstance or necessity.

Nina was once a sweet, innocent and generally kind-hearted girl who had a very unnatural love for cute furry animals which she adored to hug. Her uncle Neo Cortex was worried by these signs of a pure heart and so he sent her to his old school, Madame Amberly's Academy of Evil, to learn how to become a villain. Before sending her off however, Cortex replaced Nina's organic hands with bionic, spring-loaded, steel trap ones to stop her from hugging adorable critters (as they would be crushed by her new appendages). During her time at the academy, Nina changed from being sweet and innocent to a villainous goth girl who desired to commit acts of evil, much like her uncle.

In order to get the help needed to repair his damaged Psychetron machine, Neo Cortex with Crash Bandicoot go to pick up Nina from the Academy of Evil. Nina made her way to Cortex's airship across some rooftops and was flown to her uncle’s iceberg laboratory where she effortlessly fixed the Psychetron by hitting the side of a terminal. The trio then use the machine to travel into the 10th dimension, home of the Evil Twins. Upon arrival however, Nina was kidnapped by Evil Crash who used her as a sled to slide down a mountain. Crash and Cortex found Nina afterwards at Evil Crash’s house, where she then joined them to infiltrate the Evil Twins' base and eventually defeat the twins themselves.

As punishment for her betrayal in Crash of the Titans, Nina was held prisoner in Cortex's evil public school (that iconically wasn't located anywhere considered "public") which was under control of Nina's former minions, the Brat Girls. Crash and Aku Aku were forced to break into the school and seek Nina’s help in foiling her uncle’s latest scheme for world domination. At first, Nina refused to help them, but soon reconsidered after the pair reluctantly agreed to kiss each other for her amusement and help with her school project. Nina reveals that Cortex has reunited with his old colleague, Nitrus Brio.

In comparison to Dr. Neo Cortex, Nina is somewhat more competent and possibly more ambitious, usually concocting her own evil plots to carry out. She is also shown to be very smart, since she has been able to outwit her uncle on a few occasions and was capable of commanding his forces by herself. Nina even seems to have at least some knowledge working with advanced technology, as her help was needed to fix the Psychetron; a machine that can be used as a inter-dimensional gateway.

Nina can be bratty and egotistical, claiming to be "the queen" of Madame Amberly's evil academy while regarding other students as "the dreads of society". However, she has also admitted to being antisocial and can sometimes be found by herself brooding and plotting. 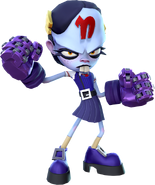 Retrieved from "https://hero.fandom.com/wiki/Nina_Cortex?oldid=2233287"
Community content is available under CC-BY-SA unless otherwise noted.