The Student of Stealth

Fighting with his Arms

Get the invitational letter to Smash Bros. (Failed)

Fighter
Ninjara also know as "The Student of Stealth" is one of the playable fighters in the 2017 Nintendo game ARMS.

Ninjara is a student at the Rasen Ninjutsu University. He was asked by the headmaster to represent his school in the ARMS tournament, which he agreed to do.

Ninjara is a ninja, working in the shadows. He enjoys reading and lurking in the dark. He also is extremely studious and enjoys learning. 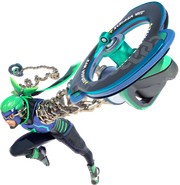 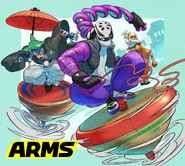 The picture at the end of Ninjara's Grand Prix.

Ninjara along with the ARMS fighters as Min Min's final smash in Super Smash Bros. Ultimate.