Help the Rangers to stop all the villains.

Defend the earth from evil. (all succeeded)

Ninjor is the creator of the Power Coins and an ally of the Mighty Morphin Power Rangers.

With the drastic damages to their Power Coins caused by Rito Revolto, the Power Rangers headed into the Desert of Despair where they found Ninjor. Though he refused to help them at first since he thought they didn't have good intentions, after they said that they would fight anyways, he was convinced that they were sincere. Ninjor gave them Power Coins with new Ninja Powers and the Ninjazords and he later helped the rangers in their battles. However he was captured by Lord Zedd and Rita Repulsa after they discovered the Shogunzords so that they could use him as a power source for them. Ninjor later managed to escape them after Rito dropped the jar they kept him in when Master Vile arrived. But he was captured again by Vile after his new Blue Globbor monster absorbed energy from him. This also made it so the rangers wouldn't fight the monster, since hitting the monster hurt Ninjor as well. Luckily the Globbor monster lost some of its power, severing its link to the ninja master. He escaped and fought the monster and Vile alongside the rangers and their Megazords. However when Master Vile turned back time with the Orb of Doom, Ninjor ended up back in the temple where the rangers had found him.

Ninjor has a number of powers being a master of ninja powers, such as a white cloud he rides into battle on and the ability to disappear in puffs of smoke. He can also grow to the size of a Megazord (a form he calls Ninjor Expansion Mode) and enter a samurai esque fighting form called Ninjor Battle Mode, that allows him to fire explosive fireballs. Ninjor usually wields a katana in combat, but in Battle Mode, he combines it with the sheath to form a lance weapon.

As a ninja master, Ninjor had a wide array of powers at his command. He had a large white cloud that he rode into battle on, and could disappear into puffs of smoke at will. Ninjor and his Temple of Power are both key elements to the Rangers maintaining their Ninja Powers. In battle, Ninjor often wielded a ninjato blade.

He could also expand to the size of a Megazord (which he called "Ninjor Expansion Mode"), and was able to transform into a powerful samurai-esque Battle Mode.

Ninjor in Expansion Mode was able to transform into a powerful samurai-esque Battle Mode. When in Battle Mode, he could connect his weapon with its sheath to form a powerful lance. He was also able to generate and throw explosive fireballs from his hands, which were often instrumental in destroying Rita and Zedd's monsters. In order to transform into Battle Mode, Ninjor would usually call out "Ninja Power, Now!" or "Ninjor Expansion Mode!" and then transform. Typically they were just a distraction, so the Rangers could go in for the kill, but his fireball that hit at the same time as the Shogun Megazord sabre actually is what finished off Globbor, once all his energy was depleted. 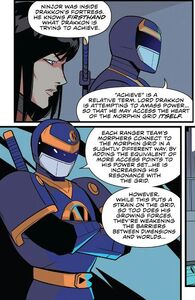