Traveling with her sister

Nio is the younger sister of Ayesha Altugle, the game's main protagonist. Nio is a bright young girl who helps her older sister with her herbalist's workshop. While collecting herbs one day, Nio mysteriously disappears, and is never seen or heard from again. A gravestone is placed where Nio had disappeared, and she is assumed dead. Her whereabouts are unknown, although most people believe that she was "spirited away", or swallowed up by the ancient ruins.

She is voiced by Mariya Ise in the Japanese version, and by Kira Buckland in the English version.

One day, during a visit of Ayesha at Nio's grave, a figure who looks like Nio appears. Upon seeing it, Ayesha believes that her sister is alive and decide to go on adventures to find her thinking she might be alive.

Everytime Ayesha find a glowing flower, Nio will appears for few seconds before dissapering. Later in the game, Nio will sometimes appears as a spirit to help Ayesha in her research or just to pass time with her.

If Ayesha does not succeed to find Nio, Keithgriff will saves her in Ayesha places and bring her back to the worshop.

If Ayesha does find her sister, she will fight Yggdrasil, and after defeating him will save Nio and bring her back. After that, Nio will be recruitable in Ayesha's party and will have a store on the bazar.

Before the beginning of the game, she has once again been separated from Ayesha and came to Colseit in order to investigate The Unexplored Ruins.

She became an apothecary and is travelling to sell medecines during her journeys and to find her sister. When she came to Colseit, she was given a place to stay by Escha's family.

She has a shop from which Escha and Logy can buy materials and is a playable character in the Plus version. She used a fake name to prevents the authorities to link her to Ayesha(who is actually wanted for detroying ancient ruins).

Later in the game, Nio reveals that she can hear voice that other can't hear. This is revealed to be Flameau's voice. 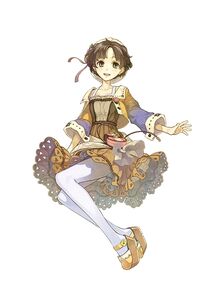