Be with Kimi.
Help Kaneki destroy V. (both succeeded).

Nishiki Nishio is a ghoul whose original feeding ground was taken from Rize. He is a sophomore in the Pharmaceutical Department of Kamii University and Kimi Nishino's boyfriend.

He was voiced by Shintarō Asanuma and Hidetoshi Akutsu (child) in Japanese and Eric Vale and Morgan Berry in English.

An average young man whose distinctive traits are his glasses and messy hazelnut hair. Like other disguised ghouls, Nishiki dresses in normal casual clothes to blend in. He also wears two bangles that Kimi brought for them to match together. Aftter the Aogiri Arc and into the Anteiku Raid. Nishiki cut his hair into a bowlcut hairstyle similar to the one he had during his first year at Kamii University. After the timeskip, Nishiki appears as a ghoul named "Serpent", donning a snake-like mask and wearing a hooded cloak. With his mask off, he appears to have gained a scar over his left eye during the timeskip and his hair has grown back. His expression has become much more melancholic after the timeskip.

Nishiki is a diligent student and prodigy. He has a rude, insensitive attitude with a knack for insults. He also demands that persons younger than him show respect for their elders. Touka once described Nishiki as being "sex-obsessed." Above his sharp tongue, he is a cautious individual who isn't keen on trusting others.

As a child, Nishiki had the same attitude as Kaneki. He questioned eating humans and questioned his sister's mindset. Nishiki deeply loved his sister and had a very close relationship with her.

After his sister was betrayed and killed by members of CCG, Nishiki became unable to trust people, especially humans but also ghouls, and hardly socializes with others. He acts like a lone wolf and attacks ghouls that seem to trespass in his feeding ground. He originally approaches his girlfriend Kimi to use her for his own ends.

After fighting Kaneki, Nishiki is weakened to the point where he resorts to eating Kimi in order to recover. However, after she accepts him as a ghoul, he cherishes Kimi more than anything else and has regained some trust in others. He joins Anteiku so that he is provided with food and doesn't have to kill humans to eat.

Nishiki loved his sister very much. It is her death that resulted from a betrayal from a human friend that sparked his great distrust in humans.

At the beginning, Nishiki starts enmity toward Kaneki just because he thought that Kaneki was invading his feeding ground, and as the way he shows his strength to weaker ghouls.

However, after joining Anteiku, he became more like a close friend to Kaneki.

Though he initially saw her as a rival in ghoul strength, and frequently argues with her in foul language, they eventually came to terms and close friends in supporting Kaneki.

He has a very casual senior-junior type relationship with Hide but hardly has any emotional attachment to him, even attempting to kill him out of fear of Hide's observant and investigative nature.

After meeting Kimi, when she left her change in the vending machine, he tells himself that he can use her to his advantage. They're not often shown in romantic situations, other than in chapter 6, when Nagachika and Kaneki walk in on them kissing. (In chapter 43, however, during Nishiki's flashbacks, they are shown sitting in his room together. Nishiki is drinking coffee, shirtless, and Kimi is laying under a blanket, and also appears to be shirtless.) Before, he wanted to use her, but after she lets Nishiki bite her shoulder and declares her love, he stops denying that he does, in fact, love her back.

Nishiki hates Tsukiyama ever since he kidnapped Kimi so he could have Kaneki eat Kimi while Tsukiyama eat's Kaneki, eventually when Nishiki sees Tsukiyama in a depressive state he offers him coffee so he won't starve.

Nishiki is able to use a bikaku kagune. He is strong enough that most ghouls avoid fighting him, but isn't a match for Touka or Rize. After the timeskip, he is shown as a powerful Ghoul estimated to be at least S-rated, making him a deadly threat to Ghouls and Investigators alike. Not only does he have considerable strength, he is exceptionally agile and shrugs off attacks from the members of Quinx. He is proficient in hand-to-hand combat, with a strong preference towards kicks or striking with his kagune. After the timeskip, he is powerful enough to handle multiple investigators at the same time. 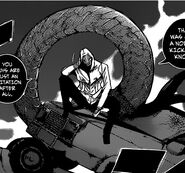 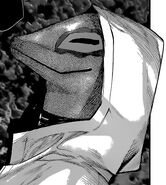