Heroes Wiki
Register
Don't have an account?
Sign In
Advertisement
in: Female, In Love, Animals,
and 16 more

Having fun and adventures, spending time with Kenai

To burn a amulet she got from Kenai at Hokani Falls, so she can marry Atka (originally)

To stay with Kenai

Kenai, Koda, Rutt and Tuke, Anda and Kata, Tug, Other Bears, Atka, Other members of her former tribe, Bering, Other Racoons

In Love
Nita is the daughter of Chilkoot and his late wife, the niece of Siqiniq and Taqqiq, the childhood friend later wife of Kenai, the sister-in-law of Sitka and Denahi and the tritagonist in the 2006 direct-to-video Disney film Brother Bear 2.

As a human, Nita possesses a slender build, along with dark brown eyes as well as tan skin and black hair, which she keeps in a long braid throughout much of the film (although she later lets it flow loosely). Her parka is rather unique from those of other characters, as it is a light brown color from the waist up, whereas from the waist down it is a dark (almost chocolate-colored) brown, extending from the legs all the way down to the boots. In addition, Nita's parka has a white fur trim on the hood and arm cuffs.

In her bear form, Nita, unlike Kenai, is shorter in height and also has fur that is a light brown color (although it looks nearly the same color as her husband's when viewed in the dark). However, Nita still possesses the light brown eyes she had as a human.

Nita originally met Kenai when both were (human) children. They were friends and spent a great deal of time together. Nita eventually leaves Kenai to travel to a new home with her tribe; before parting, however, Kenai gives Nita his amulet.

In present day, Nita is a young adult and is engaged to a man named Atka. During their wedding ceremony, however, a large earthquake occurs and separates the two. Nita goes to Innoko the Shaman and learns that she is already betrothed to Kenai by the spirits due to him giving her his amulet. In order to marry Atka, she must burn Kenai's amulet with him at Hokani Falls on the equinox. Because she is a human, Nita is given the power to talk to animals by the spirits.

Nita eventually finds Kenai and his adoptive brother Koda and convinces them to journey with her to destroy the amulet. Though their reunion is initially tense, Nita and Kenai reconnect and begin to develop deeper feelings for one another. Koda is unhappy about this, and fears that Nita will convince Kenai to become human again. Frightened at being left alone again, Koda flees; Nita eventually finds and rescues the cub, explaining that she will not take away his adoptive brother.

The group is eventually able to reach Hokani Falls and burn the amulet, before losing her ability to talk to animals. Nita, however, begins to regret her decision as she has fallen in love with Kenai. Koda seeks out Nita's village, hoping to bring her back for Kenai. Koda arrives on her second wedding, shortly followed by Kenai. Atka and the villagers hunt the two bears, but Nita stops them from killing her friends. Confessing to Chilkoot that she loves Kenai, Nita allows the spirits to transform her into a bear. She and Kenai are married by the village and begin raising Koda together, whilst being watched on secretly by Kenai's brother Sitka in eagle form.

Nita is a generally benevolent young adult, though she can be very tough and stubborn. As a child she was adventurous, and explored with Kenai. During one of these explorations, she fell beneath ice and nearly drowned. Ever since, she has had a fear of water that she refuses to admit. This causes her to lose her satchel and the amulet is temporarily stolen by a gang of raccoons. Eventually, she overcomes her fear with the help of Kenai. She is an independent individual and has skills at hunting. Nita is able to connect with the orphan Koda as they both have lost their mothers and fear being left alone.

The amulet that Nita must burn. 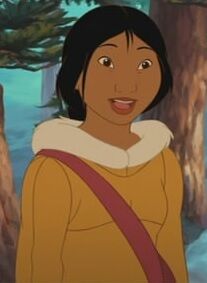 As a human before changing into a bear. 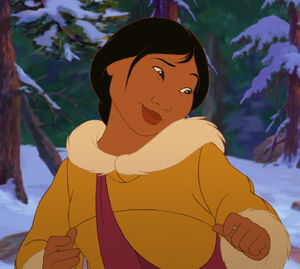 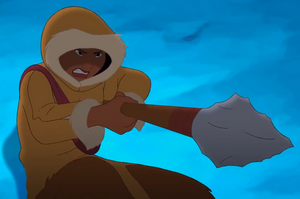 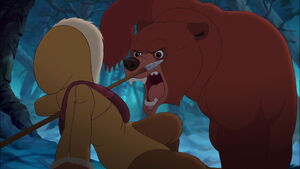 Nita is confronted by a furious Kenai. 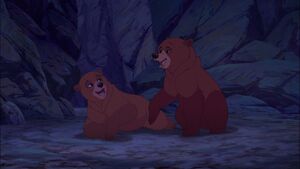 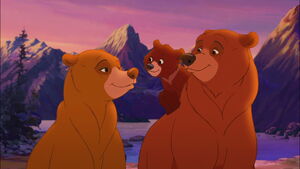 Nita and Kenai are married.