Manipulating and exploiting anyone.

Kill Ashrah for killing her people.
Obtain the god-like power of Blaze to become a vampire blood goddess and create a new race of Moroi.

Nitara is a character in the Mortal Kombat fighting game series. She is a vampire (Moroi) that made her debut in the game Mortal Kombat: Deadly Alliance.

Although depicted as self-serving and morally neutral, Nitara is not above keeping her promise to others, as she sends Cyrax back to Earthrealm after he retrieves the orb for her.

She has keen manipulative and exploitation skills, in which she instructs and tricks Reptile into destroying Cyrax's arm panel (his only means of travelling the realms). Another instance was when she lures Ashrah into following her out of Vaeturnus and into Edenia.

Nitara displays genuine concern for her fellow Vampire's, as she made it her goal to help restore Vaeternus' fragile stability. Upon learning that her race is rapidly diminishing, because of the wielder (Ashrah) possessing the holy Kriss blade (the weapon that is said to be the bane of the Moroi), she becomes determined to eliminate the threat once and for all.

Nitara had spent a very long time trying to locate a mysterious Orb that bound her realm to Outworld. She had at long last discovered its hiding place, but unfortunately rests in a location that she's unable to access, submerged in molten lava. Fortunately for her however, she had spotted an Outer World Investigation Agency agent Cyrax traveling across Outworld. His cybernetic body can descend into the lava and retrieve the Orb unharmed.

Realizing that she would have to offer Cyrax something in exchange for his services. She comes across Reptile and give him the Kirehashi blade (a weapon from the Zaterran realm) and tells him of Kitana's military encampment, whom was grateful for her apparent kindness. After the death of his former master Shao Kahn, he offered to serve her. Taking advantage of his loyalty and through careful manipulation, she orders Reptile to engage the cyborg in combat and destroy his arm panel. Immediately after Reptile had fled, Nitara introduces herself to Cyrax and promised to send him back to Earthrealm if he can retrieve the Orb for her.

In Nitara's canonical ending, she and Cyrax made it to Onaga's incubation chamber where the Orb rests, and he was able to successfully obtain the Orb for her, she kept her end of the promise and sends him back to Earthrealm. Afterwards she picks up the Orb, raises it above her head and smashes it to the floor, the destroyed artifact exploded and knocks her out and she later wakes up for the first time, in her home realm.

Nitara has a few cameo appearances in Deception. One of the arenas the players fight in is a prison and she can be spotted in a cell together with several other characters. In Konquest mode, she can be found in Outworld, and in the Netherrealm speaking with Cyrax.

After the freedom of her realm Vaeturnus, Nitara was revered for her role, and helps to restore her realm to its former majesty. Not long after, reports of mass genocide of her people began to occur began to occur. The wounds on the corpses indicated that the attacker had used a mystical blade known as Datusha (a blade solely created to slay vampires). Nitara was sent by her people's elders to a crater in Edenian so as to find a prophescied force of great power that would be able to destroy the blade. She stumbles across the demon Ashrah, the blade's possessor who was slaying vampires in the belief that it was purifying her soul. To protect the rest of her race, Nitara defeats Ashrah and journeys to Edenia, planning to lure her attacker to the Edenian weapon where it may be used against her.

Nitara would later join the Forces of Darkness in Armageddon intro, where she is seen fighting Smoke. She would later die along with the rest of the kombatants.

In Nitara's non-canon ending, the gift of god-like power of Blaze transformed her into a blood god, the other kombatants were horrified and fled from the pyramid, but none were spared her wrath, she mutated each of them (starting with Shao Kahn) into her vampire slaves. With the most powerful fighters at her command, Nitara and her unstoppable army easily conquered the realms.

Nitara was mentioned in the Mortal Kombat X Comic Series by Quan Chi, who gave Havik her Blood Magik in exchange for retrieving Amulet of Shinnok.

Appearance in other media

In this continuity, Nitara appears alongside Shang Tsung's warrior, before making their way to Raiden's Temple. Thanks to Kano, The Outworld forces stormed the Temple, to where she is ordered by the evil sorceror to deal with Kung Lao, despite her efforts, Nitara is outmaneuvered and was ultimately killed by the Shaolin warrior's razor hat.

Being a Vampire, her moves seem to revolve around blood, for example she can shoot a ball of blood from her mouth as a projectile and her fatality have her biting violently on her opponents neck. Because of her wings, she can advance towards or make a quick escape from an enemy in little time.

Nitara has a gemstone that grants the ability to traverse the realms. In order for it to activate it, she has to cite an incantation. 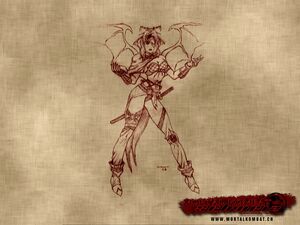 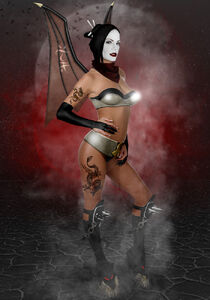 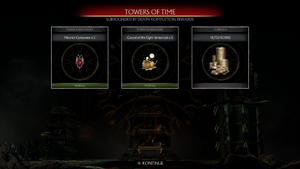 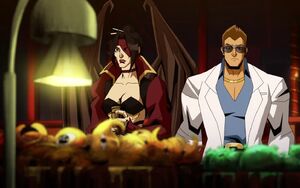