Nitori Kawashiro is a shy Kappa heroine from Touhou who lives on Youkai Mountain. In fact, the first time she sees the heroine, she runs off with barely a word. She's good-natured enough, but has an odd way of showing it when she tries to scare the heroine away from the mountain via danmaku and spell cards. It's for the heroine's own good, though, as the mountain is a very dangerous place for humans, and Nitori just doesn't want her to get hurt. She actually likes humans; she just doesn't seem to know how to act around them. During the events of Subterranean Animism, she is one of the Kappas who hears from the Goddess of the sky about the new power of nuclear fusion in the Underworld. However, they are unwilling to go there due to the Oni living underground. Learning that Reimu is going underground to investigate, she convinces Marisa to explore there as well, since she doesn't seem to have anything better to do.

Nitori is a shy kappa by nature, and if she is alone and sees a human, she'll run away, like in Mountain of Faith. She considers herself to be superior to humans and even other youkai, and when she's by herself it's easy to see. However, when among her own circle of friends, she is quite cheerful. As a kappa, she is easily persuaded to leave you alone by a cucumber or two. However she has a greedy side when it comes to running a stand and is quick to come up with plots to maximize profit. 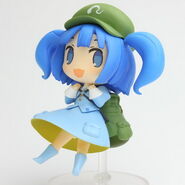 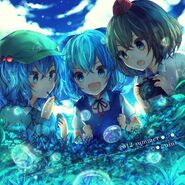 Retrieved from "https://hero.fandom.com/wiki/Nitori_Kawashiro?oldid=1636586"
Community content is available under CC-BY-SA unless otherwise noted.