Restores all the Bens and multiverse from non-existence (Succeeded)

No Watch Ben is the supporting character of Ben 10: Ominverse. He is an alternate version of Ben Tennyson who doesn't have an Omnitrix.

No Watch Ben looks familiar to Ben Prime. The only distinguishing difference is he always wears a hoodie, while Ben Prime wears T-shirt while around him. He used to have an old, brown wristwatch in place of the Omnitrix, before it was stolen by Kevin Levin.

No Watch Ben lives a usual, normal life where nothing out of ordinary happens to him. He is bored of the regularity in Bellwood and craves some adventure in his life.

Since he never had any experience facing real danger, No Watch Ben panicked when the other Bens attacked him.

Compared to his alternate counterpart, Ben Prime, No Watch Ben shows lack of forethought when it comes to heroism. No Watch Ben also tended to get depressed due to being unable to perform good deeds as a result of not having his own Omnitrix, until he was encouraged. After he got his counterpart's Omnitrix, No Watch Ben started to act like a hero and became almost indistinguishable from his main counterpart.

Similar to the other Bens from the multiverse, No Watch Ben possessed some degree of martial arts and self-defense.

No Watch Ben has shown adequate control the Omnitrix and its alien forms while he had it, utilizing their abilities well despite his lack of experience.

Unlike his original counterpart, No Watch Ben didn't transform into the wrong alien with Ben Prime's Omnitrix and always successfully transformed into the alien he chose, giving further credence that if the Omnitrix does mistransform, it is Ben Prime's fault.

No Watch Ben lacks the prior experience and knowledge about aliens shared by his multiverse counterparts who had an Omnitrix. 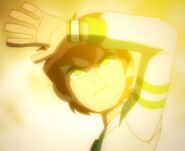 Add a photo to this gallery
Retrieved from "https://hero.fandom.com/wiki/No_Watch_Ben?oldid=1910982"
Community content is available under CC-BY-SA unless otherwise noted.