Exterminate all the walkers (failed)

Noah is a survivor of the outbreak in AMC's The Walking Dead. He is first encountered as a hospital ward in Grady Memorial Hospital in Atlanta by Beth Greene, who he forms a good friendship with. Eventually, he becomes a member of Rick Grimes' group. He served as a supporting protagonist during Season 5.

He was portrayed by Tyler James Williams, who also portrayed Chris Rock in Everybody Hates Chris.

Nothing is known about Noah's life prior to or after the outbreak except that he and his family had lived in Shirewilt Estates, a walled-in neighborhood within Richmond, Virginia.

Dawn Lerner and her officers. Noah was taken by the group while his father was left behind to die. For about a year, Noah worked within Grady Memorial as Dawn's personal assistant, ironing her clothes among other things, while at the same time plotting his escape.

Upon meeting Beth for the first time, Noah told her that Dawn helped him, but left his father to die because his father would have been more trouble. Noah is one of only a couple of people at the hospital who are friendly to Beth, he gives Beth a lollipop and clean clothes, and then tells her about his father and his plans to escape. Later, they trying to escape together, climbing down an elevator shaft into the basement and then fighting their way out of the basement. Noah manages to escape but Beth is recaptured by one of the officers.

Noah appears in this episode after escaping the hospital, having changed his ward clothes and constantly avoiding the officers who are searching for him. He encounters Daryl Dixon and Carol Peletier as they are scouting a building, he takes Carol's rifle and points at them. He orders Daryl to drop his crossbow, as he doesn't want to hurt them and he needs the guns.

After taking the crossbow and the rifle, he rips off some tents full of walkers to make distance between him and Daryl and Carol. As he runs from them, Carol tries to shoot his leg, but Daryl moves the gun, making her miss the shot and allowing Noah to escape. He later encounters them at another building and as he tries to move a bookshelf that is blocking a door, but gets tackled by Daryl, who pins him down using the shelf. Daryl takes the guns and begins to walk away, as a walker passes through the door and tries to get to Noah. Daryl refuses to save him, but as the walker gets hold of Noah, Daryl has a change of heart and shoots the walker in the head. They free Noah and the boy reveals that he was held at the hospital and that Beth is also there after they ask him for a blond girl.

As they see a wagon from the hospital, they try to exit the building but Carol is hit and taken by the cops. Noah and Daryl hide, and Noah says that they can rescue both Carol and Beth but that they need guns and people, with Daryl stating that they do have both things. They escape the city in a truck, heading back to the church.

Noah is shown with Rick's group at the church, and then they head back to Altanta. Meanwhile, Shepherd and Lamson investigate the gunshots and find Noah in an alleyway. As they grab him, Rick's group ambushes and holds them at gunpoint. But a hospital car with another officer, Licari, screeches onto the scene and rescues Shepherd and Lamson. Rick's group opens fire and chases the officers, eventually catching all three.

Noah joins the group during the prisoner exchange. However, after Beth and Carol are returned, Dawn tells Rick that Noah must be returned to replace Beth. Noah willingly goes, but Rick and Daryl stop him and tell Dawn it's not part of the deal. Noah insists and goes to Dawn. Beth gives him a hug, then turns and stabs Dawn, who shoots and kills Beth. Daryl kills Dawn, and the remaining officers let Noah leave with Rick's group.

"What Happened and What's Going On"

Noah is still devastated by the unexpected death of Beth. He tells Rick of his walled community of twenty and is accompanied by Rick, Tyreese, Michonne, and Glenn Rhee, to make sure it can become a sanctuary for the group. On the way there Noah and Tyreese talk about Noah's experiences at the hospital and killing. Tyreese also tells Noah of his and Sasha's father, who listened to the stories on the radio about what happened a thousand miles away or down the block. Noah reveals he lost his father in Atlanta, but mother, and his twin brothers are still alive in the community.

Two miles away. The group parks in the woods to approach Noah's community on foot, off the road, despite Noah assuring Rick that his community is a safe place. Rick declines "Just in case". Noah also reveals that they don't have spotters or snipers, just a perch built on a truck parked sometimes upfront. Once he sees the entrance, Noah rushes to the gates and tries to open it, but its locked. After hearing some noises inside, Noah panics, and climbs the gates, followed by the rest, only to find that walkers have overran Shirewilt.

Noah breaks down in tears, with Tyreese and Rick trying to comfort him. While Rick, Michonne, and Glenn go to gather whatever supply may remain, Tyreese stays with Noah, telling him that he wanted to die after he lost Karen. Noah notices his house and runs towards it, followed by Tyreese. He tries to stop Noah from entering but Noah insists. Inside, they find Noah's mother dead body. Noah covers her body with a sheet and whispers to her that he tried to get back. Minutes later, Noah finds Tyreese after the latter has been been bitten by the walker who used to be one of his two younger twin brothers, whom Noah puts down, stabbing him in the eye with a toy. Noah instructs Tyreese to stay there and goes for the others. He helps them cut off Tyreese's arm and then carrying him back to the car.

Noah and the others wait for Daryl, Maggie Greene, and Sasha to come back from the woods. When they ran out of gas the group continue to walk all the way to D.C. hopefully to find some place that is safe. While they were still walking the group sits and wait for Daryl to come back from the woods, then they all spotted dogs then Sasha kills them then Noah tells Sasha that Tyreese tried to help him he doesn't know that were gonna make it. Then they found water on the road then it began to rain then they all head to the barn for shelter.

Noah is first seen pointing a gun at Aaron when he is brought back into the barn. After the cars are brought back to the barn, he is assumed to be riding in the RV when they leave. While the RV is on its way to the Alexandria Safe-Zone, Noah gives Aaron medicine for Eric. Aaron asks Noah when he sprained his ankle, to which he answers "During all this...". Aaron than tells Noah that they have a skilled surgeon, Pete, back in Alexandria who could fix his leg. Noah thanks him for telling and leaves the room. At the end of the episode, Noah is seen with the rest of the group waiting at Alexandria's gates.

He arrives in Alexandria and is assigned to be a runner. He goes on a dry run with Glenn, Tara Chambler, Nicholas and Aiden Monroe. He is shocked by how they string up walkers and attempts to kill one who they want alive. He witnesses the fight between Glenn and Aiden.

Noah appears at Deanna's party feeling uncomfortable and wanting to leave, but Maggie and Glenn assure him that he is with family now.

Noah is seen with Reg, Deanna's husband, discussing how he wants to learn architecture from him. Pleased by his approach, Reg gives Noah his notebook for him to write notes. Noah assures Reg that is the beginning and he wants to help build Alexandria in the "long run".

Noah joins Glenn, Tara, Eugene, Aiden and Nicholas on a run for micro-inverters, suggested by Eugene to repair the power grid, at a nearby supply store. During the drive there, Tara bothers Noah to tell her what he and Reg were talking about, but Noah resents. The group arrive at the supply store and is impressed with Noah's accuracy as he headshots a walker from quite a distance.

As the group enters the store, Noah assists in looking for walkers with Glenn, Nicholas and Aiden as Eugene and Tara search for the micro-inverter. Aiden spots a walker full-fledged in a military uniform, trying to put it down but accidentally shoots a grenade and the group is caught in the blast. Fortunately, no one is killed but Aiden and Tara suffer major injuries. Noah provides cover fire as Nicholas and Glenn try and rescue Aiden from the bars impaled in him. Failing to do so, Aiden is devoured by walkers as Glenn and Noah run after Nicholas.

Stuck in a revolving door, Glenn, Noah and Nicholas are surrounded by walkers. Nicholas being on side, while Glenn and Noah are on the other. Nicholas causes the revolving to turn as he selfishly tries to escape, allowing for the other side to open and the walkers on the other side grabs Noah. Nicholas escapes as Glenn desperately tries to save Noah. Noah tells Glenn to not let him go. Glenn is horrified and devastated as he watches Noah get torn apart by walkers. 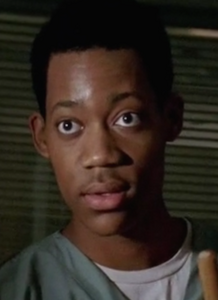 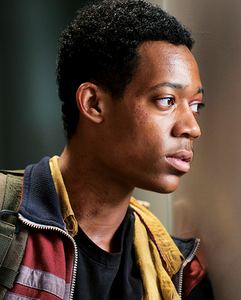 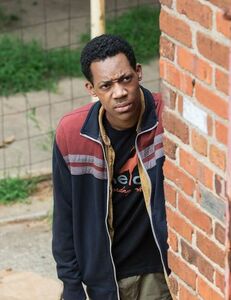 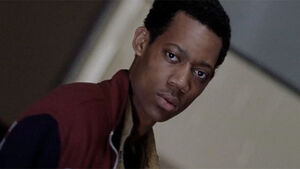 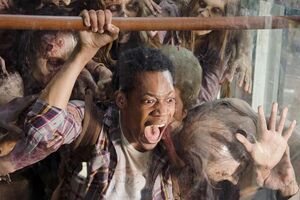 Noah's death.
Add a photo to this gallery

Noah at the Walking Dead wiki

Retrieved from "https://hero.fandom.com/wiki/Noah_(The_Walking_Dead)?oldid=1952969"
Community content is available under CC-BY-SA unless otherwise noted.