No information
Nohemon is is a Digimon resembling a scarecrow and one friend of Taichi and Joe from the Chosen Ones in the reboot of Digimon Adventure. He called himself the guardian of water as he guarded the one source of water in the area where he lives.

He is voiced by Hideyuki Tanaka in the Japanese verison.

Nohemon is a Armor Level Digimon with the form of a scarecrow, but the crow on his right arm is his true body. The crow skillfully manipulates the scarecrow's body with psychic powers, bewildering opponents. Since the true body is a sneaky crow, he excels at telling lies and tall tales, but he is also an expert shot with a bow and arrow.

While Taichi and Agumon were searching for Joe and Gomamon, they met Nohemon, and he decided to help them save Joe and Gomamon. He leads Taichi to where Gaossmon's faction is holding Joe and as chaos erupts, guides Taichi through using his bow to shoot a water jug and create a minor flood so that he can rescue Joe. He, Taichi, Joe, Agumon and Gomamon then got drunk in a fight until Greymon and Ikkakumon intervene. During the battle, he saves Taichi from falling to his death and asks to be the one to take down Tyrannomon, the Digimon who had broken his arm.

And with his unable to properly hold his bow, Taichi has the Digimon use Tai's shoulder to rest the bow on for his shot. As Tyrannomon charges up his attack, he fires his arrow into Tyrannomon's mouth, causing the attack to detonate in his mouth instead of being fired. And when Greymon defeats Gaossmon, Nohemon removes his arrow from Tyrannomon's mouth, stating that he's paid back what he's owed and if Tyrannomon stops being his sleazy brother's puppet and hurting others, he will let him live. Rather than leaving, Tyrannomon stands up with Nohemon riding on his head, having taken a liking to him.

And later he and the many other Digimons are watching as Ghoulmon darkens the skies of the Digital World and the Soundbirdmon send their soundwaves to prepare for Negamon's arrival. And when Negamon was defeated, Nohemon and the other Digimons enjoyed the water that came out of the faucet together. 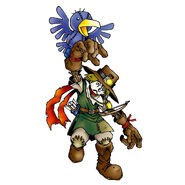 Nohemon, Taichi and Joe run away

Nohemon advises Taichi to aim for a cactus where the water is stored.

Nohemon aims at the target