No information
Nonny is a guppy who appeared in every episode of Bubble Guppies. He is "Mr. Cautious" of the group.

Nonny is calm, and he says that some animals make him nervous, and he knows what any word means. He likes to read books, and he likes the violin of the orchestra. At lunchtime, he usually has something silly in his lunch. In "Can You Dig It?", he was amazed when he sneezed really loud and uncovered a real triceratops skeleton, and he sang a song about how he wasn't disappointed, because he found a real dinosaur skeleton. In Deema's Habitat Hotel, he brought his emperor penguin in because he needs a place for the penguin to take a bath, and we helped him choose the room that was icy cold, just like Antarctica where emperor penguins live. And he said he couldn't see very well without his glasses, because without them, everything was all blurry. He never smiles, except in the pet song, the bone song, and every other time that he smiled, just like the other guppies have on their faces. And he sits next to Oona in the class.

Nonny has light skin, orange, fiery hair, and he wears blue glasses which resemble scuba goggles. He has a dark green and light green striped tail. 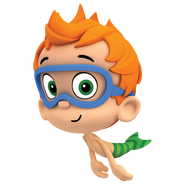 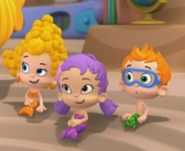 This is a picture of Nonny as the Prince of Sea Turtles.

Nonny with Oona and Zooli. 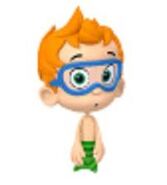 Nonny with Goby and Zooli as the Knights of Clean.

Add a photo to this gallery
Retrieved from "https://hero.fandom.com/wiki/Nonny?oldid=2235248"
Community content is available under CC-BY-SA unless otherwise noted.