Nooshy is a lynx who is a streetwise dancer and a supporting character in Sing 2. She helps Johnny regain his self-confidence and master the dance for an upcoming show, "Out of This Wolrd", also becoming his friend as the story progresses.

She is voiced by Letitia Wright, her first animated role, who portrayed Shuri in the Marvel Cinematic Universe movies.

She is a lanky lynx with brown eyes, white fur and gray spots.

Nooshy is a free-spirited feline who loves to dance although she also enjoys using her talent to earn some extra cash. She was quite skeptical when Johnny asked for her help and became so suspicious that she suspected him of being a weirdo but when he demonstrated his singing skills, Nooshy's opinion changed drastically to the point that she helped the gorilla to improve. She also doesn't like to be put down, as indicated her facial expressions when Klaus is patronizing the Lynx. Nooshy later takes pleasure in mocking the arrogant primate when Johnny shows his incredible progress in such a short time.

Despite her rather lonely attitude at first, Nooshy quickly became friends with Johnny and acted as a good dance teacher throughout the practice sessions, emphasizing passion over perfection. She gasped when she first entered the studio and quickly praised everything she saw. When Johnny got knocked down one too many times by Klaus, Nooshy encouraged her friend to get up and prove his worth, showing that she cares a lot about even her most recent friends. She also turned out to be a Clay Calloway fan.

Nooshy first appears in Redshore City, dancing for a cheerful crowd with her acrobatic dance moves. Once she is done, Nooshy begins to collect the money given to her by the admirers. A Johnny having lost confidence in him and who observed the performance, approaches the feline to ask her if they can go talk elsewhere. Nooshy isn't interested until a police officer demands to see her license, causing her to change her mind.

In a restaurant, Nooshy is served to her delight a volcano ice cream while Johnny asks her if she can give him dance lessons because his dance trainer for the musical show called "Out of This World", Klaus Kickenklober, puts too much pressure on him to the point that he considers Klaus a weirdo. Suspicious, Nooshy begins to suspect that Johnny might also be a weirdo and rejects his offer to accompany him backstage to prove it as she's not following a guy she doesn't know. Desperate, Johnny starts chanting "There's Nothing Holdin 'Me Back", at first to Nooshy's disbelief then seeing that everyone is following Johnny's pace, she releases her suspicion, calling him weirdo in the good meaning of the term.

In the studio, Nooshy is totally amazed by the immensity of the place and what takes place there. The meeting with Klaus does not go very well, the proboscis monkey being offended that Johnny sees to be personally trained by a "riffraff". Easily annoyed by Klaus' arrogance, Nooshy claims she can train Johnny in just two days, prompting Klaus to promise that he will eat his own hat if that happens.

Dragging Johhny into a silo parking, Nooshy encourages the gorilla to stay relaxed, take it step by step, and forget everything Klaus has told him. The more balanced and rewarding method of the lynx allows Johnny to progress at a faster pace than before as well for the movements as for the choreography, much to the annoyance of Klaus that Nooshy has fun provoking him by reminding him that he had sworn to eat his hat.

Later, Nooshy accompanies Johnny and his friends to their hotel room and like them, she is amazed to see former Rock Star Clay Calloway open the door. Right after, the gang flees, literally jumping out the window after entertainment mogul Jimmy Crystal sends his minions on their trail. Landing first in the swimming pool river, they escape the security guards and infiltrate the studio during the evening, still determined to make the musical spectacle even under Crystal's nose.

Nooshy actively participates in the final details of Out of This World, also meeting Johnny's father who came at his son's request to keep Crystal at bay. Shortly before the first Johnny-centric show called Planet of War, Nooshy assures the gorilla that he's going to get there. When Klaus infiltrates Planet of War and brings Johnny to the ground, Nooshy encourages Johnny to get up by tapping in musical rhythm on a metal bucket, giving him confidence and beating Klaus while earning his respect. The young lynx thereafter continues to watch the rest of Out of This World with passion until the end.

Out of this World having a runaway summer and Crystal arrested for attempting to assassinate Buster Moon, the gang begins the return trip to Calatonia by bus, with Nooshy and Johnny relaxing while listening to music. Suddenly, Crystal's former assistant, Suki, stops the bus to tell the gang that the Majestic Place wants to produce their show, which they all agree to without hesitation.

At the big opening night of "Out of this World" at the Majestic Place, Nooshy is this time part of the cast as Johnny's partner. 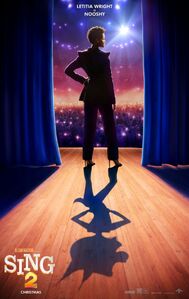 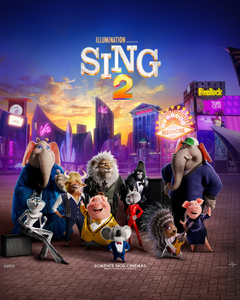 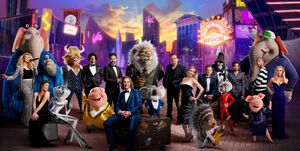 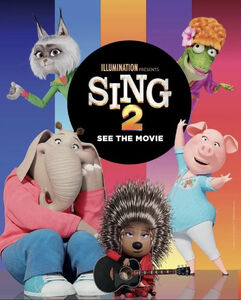 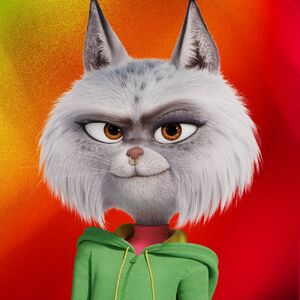 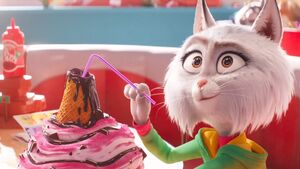 "I knew you were a weirdo!" 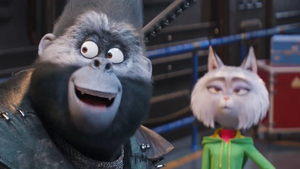 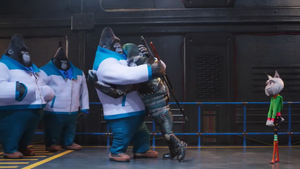 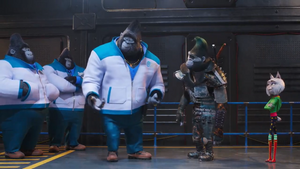