He first appears, attacking Jotaro while manipulated by Dio, but after Jotaro saves him, Kakyoin becomes a loyal ally.

Kakyoin was a young man of average to above-average height and fit to slender build. He is only seen wearing his school uniform (commonly colored dark green). Kakyoin keeps medium-length hair (often red), characterized by a large, twisting appendage hanging before his face. He wears earrings in the shape of a long, fine arch, tipped by small spheres. Later, Kakyoin acquires two thin scars vertically crossing both eyes; which he variously hides with a fine pair of dark sunglasses.

Though Kakyoin comes as a cold man, he was actually a kind and loyal man. He will support his comrades actively and fights for things that are ethically right. He hates bowing down or brown-nosing and only respectable people can be viewed as his friends. He is straight to the point but nice and cares very strongly for his friends. He resents people who plot secret schemes. He mentions he could never relate to people because of his ability, and thus never desired to make friends for most of his life; this changed when he discovered other people who also had Stands.

After Jotaro releases him from DIO's control, Kakyoin joins Jotaro's group in the quest to destroy DIO as compensation for having acted as DIO's pawn. Some of his personality undergoes changes in the middle of the story, and this is attributed to the events after his encounters with Mannish Boy and N'Doul. He eventually sheds his "repentant" attitude. In addition to the above traits, he now has more confidence and has regained a lot of his pride.

He also has a profound respect for his parents, remembering them before his eventual death.

Kakyoin's long-range humanoid Stand is Hierophant Green; able to extend tentacle-like limbs or unravel to a modest extent; as well as fire a barrage of hard projectiles (an "Emerald Splash").

About 2–3 months prior to the start of Part 3, Kakyoin was approached by DIO while traveling in Egypt with his family. DIO, having sensed Kakyoin's Stand powers, asked for a demonstration which led to them fighting. When Kakyoin lost, he was brainwashed into following DIO's will via buds from DIO's own cells and given the mission to kill Jotaro Kujo. Kakyoin returned to Japan around the same time as Jotaro left prison and attended the same school as Jotaro.

Kakyoin carries out DIO's orders on his first meeting with Jotaro. He manipulates the school nurse with his Hierophant Green, using her to attack Jotaro, but Jotaro defeats him and ends up dragging him home, both considerably injured. Jotaro soon discovers that Kakyoin was under DIO's influence and uses Star Platinum to remove DIO's implant from Kakyoin's head - despite the risk that it might openly attack both of them. Kakyoin is freed from DIO's control as a result and joins Jotaro, Joseph and Avdol on their trip to Egypt to fight DIO.

At the beginning of the trip, the group is attacked by Gray Fly, whose Tower of Gray proves to be a match even for Star Platinum. Trying to prevent the fight to take down the plane, Kakyoin knocks Gray Fly and volunteers to fight the Stand by himself, tearing it apart with his Stand.

In the trip Kakyoin proves to be a useful ally, but Joseph's Hermit Purple says that he is a spy, making everyone suspicious of him. In the end, it is revealed that the spy was actually Rubber Soul posing as Kakyoin, who separated from the group for unknown reasons. Returning to the group, Jotaro then tells Kakyoin the battle and his impersonator.

When Jean Pierre Polnareff is attacked by Hol Horse and J. Geil he is saved by Kakyoin and Avdol, but not before the latter is almost killed. Kakyoin manages to discover The Hanged Man's true ability and tricks the Stand into having only one place to go: a coin. This makes Polnareff be able to finally defeat him and avenge his sister.

In the desert, the group is attacked by Arabia Fats's The Sun, who proves to be even more powerful than Hierophant Green and forces Kakyoin to cancel his attack on the Stand.

He also is the first to realize that Mannish Boy is a Stand user, and that his Stand attacks while the group is asleep. Though the rest of the group don't believe him and come to believe he has succumbed to stress, Kakyoin is ultimately able to defeat Death 13 inside a dream by bringing Hierophant Green with him. He then teaches Mannish Boy a lesson by mixing some of the baby's own poop with the baby food.

During the encounter with N. Doul's Stand Geb, Kakyoin is slashed across the eyes and put out of commission for a while. 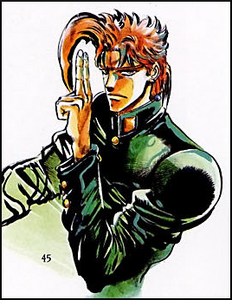 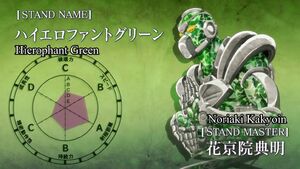 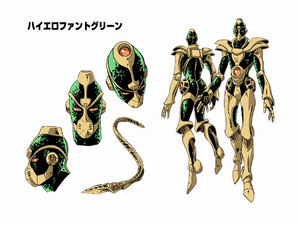 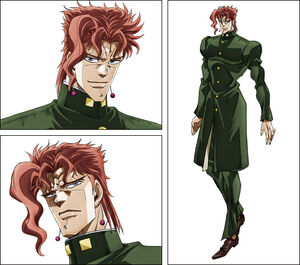 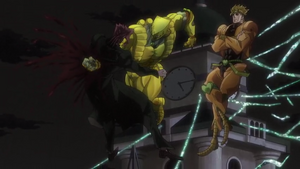 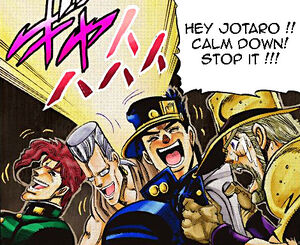 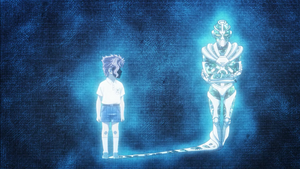 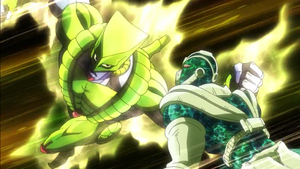 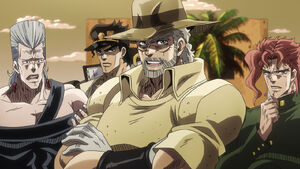 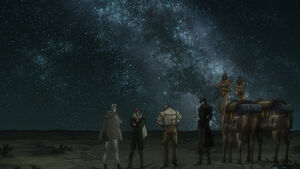 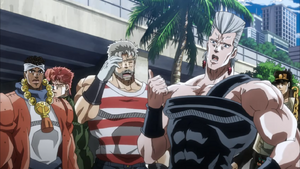 Retrieved from "https://hero.fandom.com/wiki/Noriaki_Kakyoin?oldid=2019559"
Community content is available under CC-BY-SA unless otherwise noted.