Ability to see and speak with the dead

To stop the witch's curse and save Blithe Hollow (succeeded)

Norman Babcock is the main protagonist of the Laika animated movie ParaNorman. He is gifted with the power to speak to the dead, which is why he enjoys watching zombie movies. Norman is unexpectedly called upon to save his town, Blithe Hollow, from an ancient curse. On his adventure, he matches wits with the school bully, his spoiled, boy-crazy teenage sister, a vengeful witch, and a horde of zombies to protect his family and town.

He is voiced by Kodi Smit-McPhee, who also portrayed Alexander in Dawn of the Planet of the Apes, Ethan Whyte in 2067, Keda in Alpha and Nightcrawler in X-Men: Apocalypse and Dark Phoenix. In the Japanese dub from the movie, he is voiced by Hana Takeda.

Norman Babcock was born in the town of Blithe Hollow, Massachusetts, and was born with the ability to see and communicate with the dead. His powers allowed him to converse with the spirit of his dead grandmother, but also left him emotionally distanced from his family and an outcast among the town, none of whom believed his ability to be true, with the exception of his new friend, Neil.

One day, during school rehearsals celebrating the trial and execution of the infamous Witch of Blithe Hollow, Norman experienced a strange vision of the town's past, resulting in his humiliation at school. Shortly afterwards, he met his estranged uncle, Mr. Prenderghast. Mr. Prenderghast revealed to Norman that he shared his ability to see ghosts and warned him that the witch's curse over the town was real and that he was the only one who could stop it. Shortly after this encounter, Mr. Prenderghast passed away. During the following school play, Norman experienced another vision where he was chased by the witch's accusers through a forest. Due to this, Normal panicked during the play and humiliated himself and his family in front of the entire town. As punishment, Norman's father Perry grounded him.

The following day, Norman was ridiculed by his peers, causing him to retreat into the school bathroom. While there, Norman was confronted by the ghost of Mr. Prenderghast, who explained to him that the witch's ghost would soon arise and awaken the dead. To stop this, Norman was instructed to read a certain book at the witch's burial grounds before the sunset. Norman reluctantly accepted this task, and his uncle passed on to the afterlife.

Returning home, Norman received encouragement from his grandmother's spirit to go through with the task. Norman briefly conferred with Neil and explained his objective before setting off to Mr. Prenderghast's cabin in the woods to retrieve his book. Upon succeeding in this, Norman arrived at the town's graveyard and stumbled upon the burial grounds of the witch's accusers. Norman began to read from the book at the gravesite, only to discover that the book was merely a set of fairy tales. He was interrupted by Alvin, the local bully, who took the book away from him. The sunset before Norman could finish reading the book, and the witch's ghost awoke from her slumber and promptly rose her accusers back from the dead as zombies. Norman and Alvin fled from the zombies back to Mr. Prenderghast's cabin, where Norman came to the conclusion that he was reading the book at the wrong area. He and Alvin were soon picked up by Neil, his brother Mitch, and Norman's sister Courtney.

The group drove back to the town, pursued by Judge Hopkins, during which Norman called his classmate Salma for information on the witch's burial site. Salma told Norman to search the Town Hall for records on her burial ground. Soon afterwards, the group crashed the van and were forced to continue to the Town Hall on foot. Upon arriving, the group searched the Town Hall's archives, but failed to find the information they needed. This led to an argument between Norman and the rest of the group that caused the others to leave. However, they were trapped inside the Town Hall by an angry mob that had formed to combat the zombies. Norman himself was found by the zombies and pursued to the roof of the Town Hall, where the witch storm formed. Norman climbed the witch's tower to read the book to her, but the witch struck the book with lightning, causing Norman to fall through the roof back into the Town Hall's archives.

Unconscious, Norman experienced a dream where he learned that the witch was Agatha Prenderghast, a young girl of his age who shared his ability to speak to the dead, and was tried and executed when the townsfolk mistook her abilities for witchcraft (a power that she only got after being killed). Awakening, Norman angrily admonished the zombies for their unjust treatment of Agatha. The guilt-ridden zombies admitted that they only wished to help him reach Agatha's gravesite so that he would stop the curse in order to atone for their crimes. However, Norman realized that reading the book wouldn't stop the curse, only prolong it, and opted to speak with Agatha's spirit himself. Before the zombies could lead Norman to Agatha's burial grounds, they were confronted by the mob, who accused Norman of being in league with the zombies. Before the mob could attack, however, the rest of the group stood up for Norman and convinced the mob to stand down. This caused Agatha's enraged spirit to go on a rampage across the town.

In the midst of the chaos, Norman and his family were guided to Agatha's burial grounds by Judge Hopkins. However, Norman was separated from his family by Agatha's powers and forced to confront her alone. Reaching her burial grounds, Norman spoke with Agatha, who demanded that he leave. When Norman refused, Agatha angrily attacked him and transported herself and Norman to the spirit dimension, where they continued their confrontation. Agatha continued her assault on Norman, who withstood her attacks as she launched thunderbolt after thunderbolt and continued to reason with her, telling her that her vengeance was accomplishing nothing and that there must have been someone in Agatha's life who loved her.

Eventually, Agatha calmed down and returned to her former self. Norman and Agatha conferred with one another, with Norman telling her that he understood her plight. Agatha managed to find a measure of peace and passed on to the afterlife, along with the zombies. Norman soon afterwards reunited with his family and returned to Blithe Hollow.

In the final scene, Norman was shown watching a zombie movie with his family and the ghost of his grandmother.

Norman is kindhearted, empathetic and friendly. At the start of the film, he was socially awkward and preferred to be by himself, only interacting positively with the ghosts in the town. He was also distant from his family and peers, who saw him as a freak. As the film goes on, however, Norman learns to value the people who care about him, and instills these lessons into Agatha.

Perhaps due to his ability, Norman also has a fascination with the undead and macabre, enjoying watching zombie films and filling his room with zombie-related items. 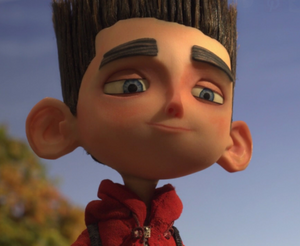 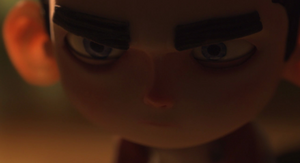 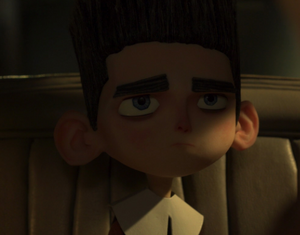 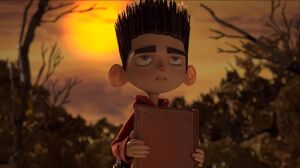 Norman at the graveyard