Hanging out with the New Warriors and the Nova Corps.

Save the cosmos from Annihilus and other villains.

Nova (real name Richard Rider), is a fictional character and superhero in the Marvel Comics and Universe, appearing as the main protagonist of the Nova comics. He is a member of the Nova Corps, an intergalactic police force who protects the universe from threats.

He was created by Marv Wolfman, and the late John Buscema, and first appeared in The Man Called Nova #1 in September of 1976.

In his senior year of high school, Rich Rider's life was forever changed when a blast from a dying member of the Green Lantern Corps-style Nova Corps transferred his powers and uniform to Rich. Using his new powers, Rich became the superhero Nova, meeting the likes of Thor, Spider-Man, the Thing, Nick Fury, and the Defenders in his career.

However, said career was cut short when he willingly gave up his powers to be with his family on Earth....or so he thought. In truth, Rich's powers were dormant, and when fellow founding New Warrior Night Thrasher threw him off a building to test this theory, Rich was back in action as a long time member of the New Warriors.

Nova briefly travels the US with the reformed New Warriors as part of a reality television show. Rider leaves the group when he is summoned to Xandar alongside the entire Nova Corps, which has been fully mobilized to respond to the Annihilation Wave, a large fleet of insectoid spaceships from the Negative Zone led by Annihilus. The wave decimates Xandar and the corps in a surprise attack. As the only surviving centurion, Rider makes contact with the Xandarian Worldmind, a living supercomputer that regulates the Nova Force and is caretaker of the entire database of Xandarian civilization. The Worldmind uploads itself and the entire Nova Force into Rider, greatly enhancing his abilities. During the Annihilation War, Rider takes command of the United Front, a loose collaboration of soldiers of various races.

In a nearly year-long campaign, Rider resists the Wave's advance across the galaxy until the United Front suffers a swift defeat. He leads a small team into the Wave's conquered territory and eventually engages Annihilus in personal combat, killing him. After the Annihilation War, Rider returns to Earth to rest. Angry that his pleas for help in the Annihilation War were ignored by Earth's superheroes because of a Civil War, after a dramatic meeting with former New Warrios member, and Rider's friend, Penance and feeling out of place on Earth, Rider returns to space.

​Post-Annihilation and War of Kings

Attempting to aid the Kree against an invasion from the Phalanx , Rider is wounded and crash lands on a sparsely populated Kree outpost. While Rider's unconscious body recovers, Worldmind deputizes a local Kree commander, Ko-Rel, to guard him. Rider is infected by the Phalanx and joins the Phalanx. Now tasked with killing Rider before the Worldmind falls into enemy hands, Ko-Rel attacks him, only to be killed by Gamora in retaliation. Upon her death, her fraction of the Nova force returns to Rider and enables him to overcome the transmode virus. He flees Kree space pursued by Gamora and a Phalanx-controlled Drax. Seeking a cure for the transmode virus, Rider eventually arrives on Kvch, home planet of the Technarchy. Rider enlists the help of the mutant Warlock and his son Tyro, who cure Rider, Drax, and Gamora of the transmode virus. The five return to Hala to engage Ultron and the Phalanx.

When ambushed by Skrulls during the Secret Invasion storyline, Rider is aided by Kl'rt. He learns about the Secret Invasion and heads for Earth. Rider learns that , the base where his brother now works, is under Skrull attack. Working with Darkhawk , Rider successfully stops the Skrulls' advance. The scientists of the facility extract the Worldmind from his brain and use the supercomputer to jump-start a project known as the quantum flask, which restores Quasar to life. A Skrull warship is about to attack Project Pegasus but is destroyed by a band of alien Nova Centurions who then declare their allegiance to Rider.

Rider learns that Worldmind has been recruiting for the Corps without telling him. When he learns that Ego the Living Planet is among the new recruits, he becomes enraged and tries to battle Worldmind. As a result, he is stripped of his rank and ejected from the Nova Corps. Because his body has become dependent on the Nova Force, Rider will die if he is without it for too long. As a temporary measure, he borrows the quantum bands from Wendell Vaughn and becomes Quasar. Using his new abilities, Rider rescues the Corps from the Shi'ar Imperial Guard. Ego is removed as a Centurion and Rider regains his Nova Prime status, but not before most of the new recruits are slaughtered by the Imperial Guard. Nova agrees to train the remaining new Centurions, including his younger brother Robert.

Realm of Kings and Thanos Imperative

A lost Nova Corps ship appears from a tear in space-time known as the Fault. Onboard is Zan Philo, a long-missing Nova centurion who is assigned to train the new recruits. Later, Rider and Darkhawk find themselves inside the Fault, where they are called to do battle for the Sphinx against his younger self. Because of the unstable timestream inside the Fault, Nova is able to return with Namorita , his old girlfriend and fellow New Warrior who had died a few years earlier. Rider returns to Project Pegasus, where he confronts an alternate Quasar who originates from the Cancerverse, a universe within the Fault.

Catching up to the alternate Quasar , Rider returns to the Fault to see the Universal Church of Truth rip it wide open. Assisted by others, he confronts Lord Mar-Vell, the evil alternate version of Captain Marvel (Mar-Vell) , but cannot stop him. Entering the Fault to assist the Guardians of the Galaxy, Rider and the Guardians watch Thanos destroy Mar-Vell. Now facing an enraged Thanos, Rider pulls the Nova Force from the rest of the Corps for extra strength. He and Star-Lord are able to hold Thanos back for the few minutes it takes for the Fault to close, trapping all three of them in the Cancerverse. The two heroes continue to fight Thanos for a Cosmic Cube which has the power to send them home. Rider charges the Cube with the Nova Force to create a doorway for Star-Lord, intending to remain behind and keep Thanos from escaping too. Star-Lord escapes, but Rider is unable to prevent Thanos from escaping as well. Because no one is immediately aware Star-Lord survived, Nova and Star-Lord receive a statue in their honor on Hala.

The latest Nova, Sam Alexander , locates the Xandarian Worldmind. Rider's consciousness awakens within the Worldmind during the encounter. Through circumstances as yet unrevealed, Rider returns to life, travels to Earth to visit his mother, and learns that his father has died. He teams with Alexander, but odd occurrences suggest that he is still linked to and influenced by the Cancerverse.

During the events of Annihilation, Richard Rider became the host of the entire Nova Force, a vast energy source that he can access to grant himself a number of superhuman attributes. As host to the entire Nova Force, which was previously used to empower all members of the Nova Corps throughout the universe, Rider is now possessed of tremendously augmented strength and durability as well as enormous quantities of energy that allows him to hold his own against other powerful beings such as the Silver Surfer.

Rider uses the Xandrian Worldmind to help maintain his mood and mental stability. Without it, utilizing the full power of the Nova Force would overcome Rider's mental stability, causing a severe mental breakdown and possibly insanity. Rider was also bonded with so much of the Nova force for so long that the molecular structure of his body cannot survive for more than two days without it or an appropriate substitute, like Quasar's quantum energy.

He comes off as a normal university student...trying to challenge Hikaru in math and p.e. With him catching a glimpse of Hikaru talking with Thor, he later-on appears at the Avengers base. Showing his true form as Nova.

This motivated him in wanting to be another cast member of Akira's team. He later becomes Hikaru's 2nd D-fighter.

Nova is also playable in the Avengers and Guardian playsets if you collect all his crossover coins. 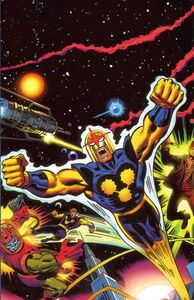 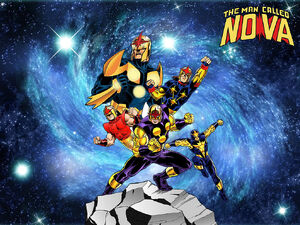 Nova's costumes throughout the years 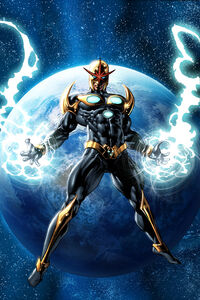 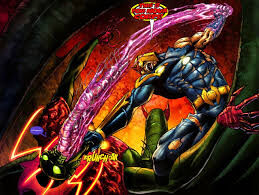 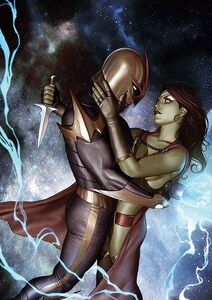 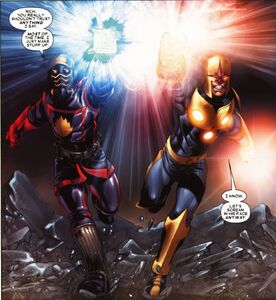 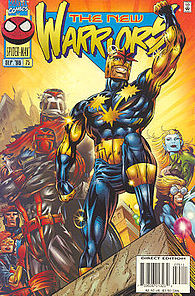 Nova and the New Warriors 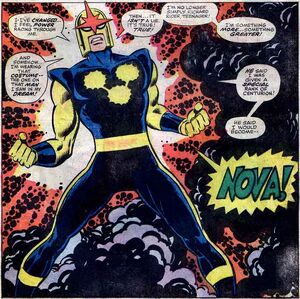 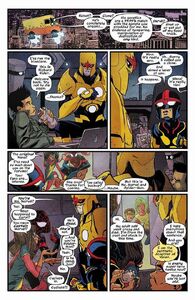 Nova and the modern generation of heroes. 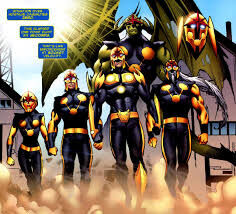 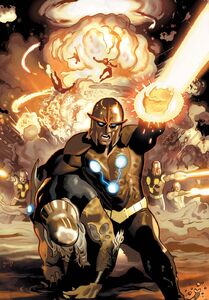 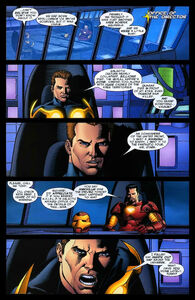 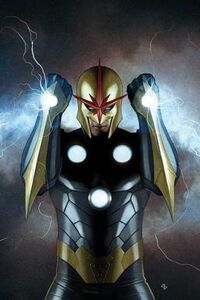 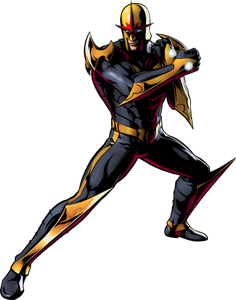 Nova in Ultimate Marvel vs. Capcom 3. 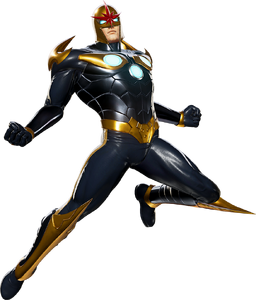 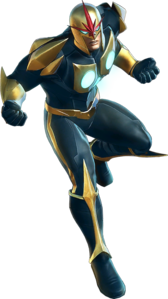 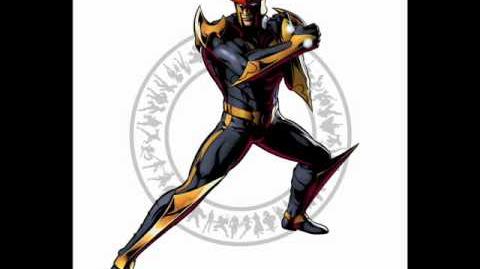 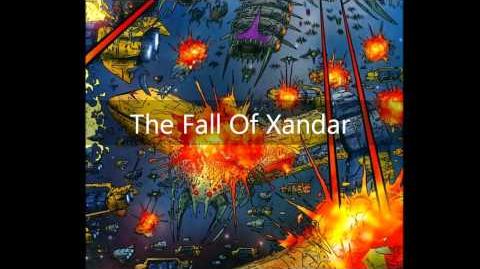 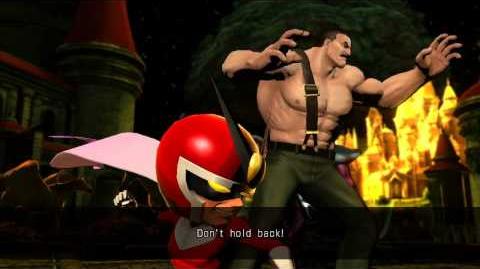