The Nova Corps is a military and exploration force of the planet Xandar consisting of 500 Xandarian soldiers and led by Centurion Nova Prime. They appear in comic books published by Marvel Comics, and related media. They have since appeared in numerous other Marvel stories set in outer space, and media adaptations, such as the animated TV series The Super Hero Squad Show and the 2014 film Guardians of the Galaxy.

Originally, the Nova Corps was Xandar's space militia and exploration division. It consisted of 500 soldiers ranging in rank from Corpsman up to Centurion and its leader, Centurion Nova Prime. The Corps also had a regiment of Syfon Warriors, of which Powerhouse was one. After the reformation of Xandar, the Nova Corps expanded its protective range to include the entire Andromeda Galaxy and Earth. They are also known as the Xandarian StarCorps. 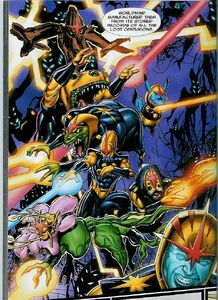 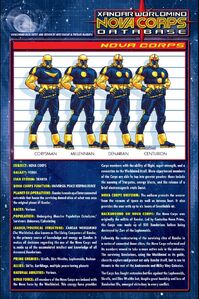 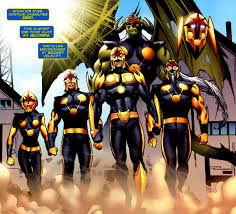 Retrieved from "https://hero.fandom.com/wiki/Nova_Corps?oldid=1933659"
Community content is available under CC-BY-SA unless otherwise noted.