November Annabella Terra, referred to as Agent X41822N or simply Nova as her call sign, is once a villainess but now remorsefully turned into a heroine in StarCraft series after the end of Legacy of the Void event. Despite the indefinite postponement of the the cancelled StarCraft: Ghost video game, she first appears in StarCraft II: Wings of Liberty and Heart of the Swarm as well as a series of novels. She is featured as one of playable heroes in massive online battle arena video game, Heroes of the Storm. Besides, Nova is now subjected to her own RTS add-on pack for the original StarCraft II titled Nova Covert Ops.

Despite having unusually high psionic potential Nova's father prevents her from being taken into the Confederate Ghost Program, she is the daughter of Terra family, one of the highly influential Confederate Old Families. But after the lethal death of her family by anti-Confederate resistance movement, Nova goes out to the suburban area of planet Tarsonis and forces to work as an organized crime enforcer. Nova is rescued during the alien invasion on the planet, and ends up in the possession of Terran Dominion, who make her a ghost as one of Covert Ops Crew. Despite falling into Ghost Program, she was able to read minds about her past and present realizing that her father prevented her from possessing her psychics. At her request, her past memories are gone.

Many years after the End War, where Amon had fallen by the good forces of 3 races of Koprulu Sector: Terran, Zerg and Protoss, her role has currently changed into a hero. Valerian Mengsk, the current emperor of Terran Dominion, sends her to stop the anti-Dominion terrorist faction known as the Defenders of Man from using the Psi Emitters to lure the alien threats such as Zerg on defenseless planets so they'll be painted as heroes and show that Valerian was weak in his imperial rule. After Nova made a deal with Alarak she went to a planet that was destroyed by the zerg invasion and remembered her memories about working for the Defenders of Man and alert Valerian about Davis is an evil General that is trying to avenge the previous emperors death. Nova captured Davis but ended up fighting the flying fleet of the Taldarim Death Fleet which caused Davis to escape. After destroying a prototype mech she assassinated Davis and was branded as a fugitive that will fight to protect the dominion people on their terms. 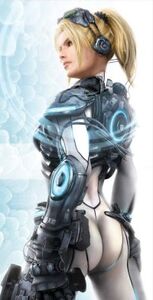 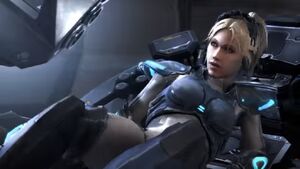 Nova awakens in the introduction of Nova Covert Ops campaign. 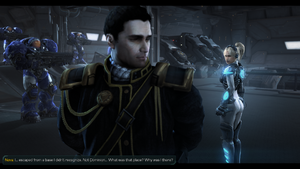 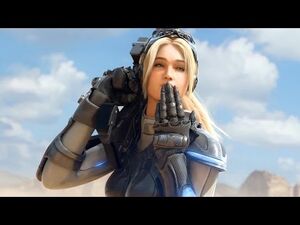 Add a photo to this gallery
Retrieved from "https://hero.fandom.com/wiki/Nova_Terra?oldid=1907944"
Community content is available under CC-BY-SA unless otherwise noted.