Nyanta is a major character of the light novel and anime series Log Horizon. He is a Werecat Swashbuckler-Chef and a former member of the Debauchery Tea Party, along with Shiroe and Naotsugu. After the Apocalypse, the trio reunite when the latter two, along with Akatsuki, travel to Susukino to rescue Serara, a member of the Crescent Moon Alliance whom Nyanta was protecting from the notorious guild Brigandia. After bringing Serara home, Nyanta, Shiroe, Akatsuki and Naotsugu become the founding members of the titular Log Horizon. As a Lv. 90 Chef, Nyanta is the one who discovers how to make edible food, and so is in charge of preparing the guild's meals.

He is voiced by Jōji Nakata in the Japanese version of the anime and Jovan Jackson in the English version, the former of whom also voices Alucard.

Nyanta is older than many of the other characters in real life and is described as possibly being in his late 30's or early 40's.  He is tall with a slender, well-proportioned figure. He appears in a green coat, a white undershirt, grey breeches, a pair of brown leather gloves, and a silky red scarf.

He is described as a dandy who always pays attention to personal appearance and grooming.

Like Akatsuki, Nyanta assumes a role-playing persona within Elder Tale and speaks in phonetic meows, or 'nya's, as reference to him being a Werecat. He is very close to Shiroe, who idolizes him and calls him 'Chief'. He is calm, reliable, and the very definition of a "cool cat", being surprised by almost nothing. He shows no reaction when he spots the gigantic goblin army coming towards the camp. He is also quite chipper and is willing to crack jokes when the time is right, such as when he joked that Shiroe used to check him for fleas.

Nyanta believes in being a gentleman even in combat, and he sees his rapiers as a weapon fit for one. He also tends to politely berate other players who fight in an ungentlemanlike manner, such as Demikas. He is kind to everyone and sees bullies as despicable, ignorant people. He is always loyal to his friends and is willing to fight for them no matter what, and can perform flawless teamwork with Shiroe and Naotsugu.

Nyanta is also shown to be quite insightful and savvy; he was one of the first people who figured out how to make edible food, concluding that he simply had to stop looking at Elder Tales as a game and cook food the old-fashioned way. Considering that all food tastes like unseasoned Japanese rice crackers in Elder Tales, his discovery is truly a Godsend and proves to be one of the first steps in Shiroe creating the Round Table Alliance and making Akihabara a place capable of living in.

As the oldest member of Log Horizon, Nyanta is very wise, keeping in touch with his gentleman status. He is also shown to be very protective of Serara, as he got notably angry at Demikas for attempting to bully her, despite almost never getting angry at anybody. Ultimately, despite Shiroe being the leader, he is the Log Horizon member that all the others respect and look up to due to his wisdom and delicious cooking.

As a former member of the Debauchery Tea Party, Nyanta is an incredibly skilled fighter. His main class is the Swashbuckler, allowing him to lower his opponent's stats with each strike, to the point of rendering them unable to fight. His weapon of choice is dual rapiers, which he describes as a gentleman's weapon. He is also extremely fast, being able to land 9 hits on an opponent within the space of less than two seconds. Although he deals less damage than Akatsuki, and doesn't have as much HP or defence as the other warrior classes, he makes up for this with many combos and longer streams of damage.

Viewing the new possibilities in this no-longer-game world, it was possible for Nyanta, with his Lv. 90 Chef subclass, to create food with actual taste without it becoming a soggy, inedible substance. This "secret" technique involves cooking food from scratch with obtained ingredients instead of crafting food from the in-game menus. As a skilled chef, he is able to cook a wide variety of dishes.  For example, when the Crescent Moon Alliance hosts a party in honour of Serara's safe return, the dishes that he and the guild's cooks produce include deep fried wild bird, tomato-stuffed omelet, corn and lettuce salad, paella with seafood and saffron, unleavened bread, and spiced lamb soup. 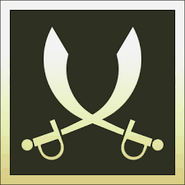 Round Windmill
Community content is available under CC-BY-SA unless otherwise noted.
Advertisement