Serve the chosen one

Obelisk is one of the three Egyptian Gods, along with Slifer the Sky Dragon and The Winged Dragon of Ra. These monsters were only capable of being summoned by the Pharaoh.

When Bakura, King of Thieves invaded the Pharaoh's palace after plundering Aknamkanon's tomb, he engaged in a ka battle with the priests. During the battle, Aknamkanon's son, Pharaoh Atem, heard his father's spirit uttering "justice lies in the name of the gods". With that, Atem managed to summon Obelisk to fight Diabound, forcing Bakura to retreat.

3000 years later, Maximillion Pegasus created cards depicting the three Egyptian Gods, for his game Duel Monsters. However the souls of the Gods came to dwell in the cards, making them powerful weapons. On realizing this, Pegasus regarded their creation as one of his greatest mistakes. He tried to destroy the God Cards, but could not bring himself to do it, so he had the Egyptian supreme council of antiquities bury the cards in different locations in the Valley of the Kings. The Rare Hunters managed to steal the "Slifer the Sky Dragon" and "The Winged Dragon of Ra" cards. However the Egyptian supreme council of antiquities was able to prevent them finding the "Obelisk the Tormentor" card. Ishizu Ishtar, from the council, later gave it to Seto Kaiba, so that he would host the Battle City tournament to retrieve the other two.

In order to regain his memories, Yami Yugi presented the three Egyptian Gods to the stone tablet in the museum. However, the God cards began to crackle with black energy as Dartz drained their power. Yami was then interrupted as Duel Monster spirits began appearing throughout the city. Later that day, Dartz's men broke into Kame Game and stole the God Cards. Yugi and his friends chased after Dartz's men and Yami Yugi engaged in a Duel with one of them, Gurimo. Despite not being a chosen Duelist, Gurimo was able to Summon "Obelisk the Tormentor" and harness its power through "The Seal of Orichalcos".[5] After losing, Gurimo threw the "Obelisk" card to Rafael before Yami could take it back.[6] Rafeal, Alister and Valon brought the Egyptian God cards to Dartz, who placed them in the mouths of three stone serpents in order to use their power to summon The Great Leviathan.[7]

After defeating Dartz in a Duel, Yami retrieved the Egyptian God cards, though their strength had already been drained.[8] After Yami Yugi's soul had been absorbed into The Great Leviathan, the other souls Dartz had captured were able to lend him their strength. With it, Yami called out, "In the name of the Pharaoh, awaken!" and summoned the three Egyptian Gods. By summoning them, Yami was also able to free himself, Joey Wheeler and Seto Kaiba from the Leviathan. Obelisk, Slifer and Ra engaged in battle with The Great Leviathan. The three combined their attacks and seemed to defeat it at first.[9] However the Leviathan reappeared in a different form, which Yami managed to defeat.[10]

Kaiba Dueled and defeated Pegasus to obtain a card capable of defeating the Egyptian God cards. Anubis added an extra card, "Pyramid of Light" to Kaiba's prize. Kaiba went on to face Yami Yugi in a Duel and used "Obligatory Summon" to force him to Summon the Egyptian God cards and then activated "Pyramid of Light". Out of curiosity, Obelisk touched the pyramid. He, Ra and Slifer, were then removed from play.[11]

When Yami Yugi entered the Memory World, he relived some of his life as Pharaoh Atem, and fought the battle against Thief Bakura, in which he summoned Obelisk, again.

The Pharaoh used the three Egyptian Gods to battle Zorc Necrophades. However Zorc managed to overpower them and turn them into stone.[12] Upon relearning his name, Atem was able to summon the three Gods again, this time from the cards in Yugi's Deck. He then combined them into The Creator God of Light, Horakhty, who defeated Zorc.[13]

Yugi and Atem constructed separate Decks for the Ceremonial Battle, which Atem needed to lose in order to pass on to the afterlife. Despite needing to lose, Atem gave the Duel his all. He included the three Egyptian God cards in his Deck and managed to summon the three of them at once in the Duel. However Yugi was able to destroy them and win. 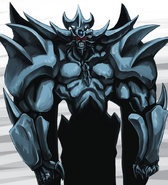 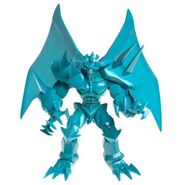 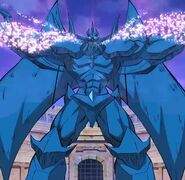