Asterix (best friend), Getafix, Dogmatix, others in the Gaul village

Obelix is a character from the French comic book series Asterix. He works as a menhir sculptor and deliveryman, and is Asterix's best friend. Obelix is noted for his fatness, the menhirs he carries around on his back and his superhuman strength. He is the only Gaul in Asterix's village who is permanently superhumanly strong since he fell into a cauldron of magic potion when he was a baby. Because of Obelix's already enormous strength, he is not allowed to drink the magic potion ever again, a ban he regards as being tremendously unfair.

Other characteristics are his simplemindedness, his love and care for his dog Dogmatix, his anger when someone refers to him as being "fat", his enthusiasm for hunting and eating wild boars and beating up Romans. His catchphrase is: "Ils sont fous ces romains", which translates into "These Romans are crazy!", although he considers many other nationalities to be just as strange.

In the live action movies he is portrayed by Gérad Depardieu. In the English dub of Asterix and Obelix Take on Caesar, he was voiced by the late Terry Jones.

Obelix was created by the late Albert Uderzo and the late Renee Goscinni.

Superhuman strength: Due to the fact that he fell into a full pot the magic potion of the druid Getafix, Obelix constantly possesses a superhuman strength allowing him to lift or hit extremely heavy objects. The exact limits of his strength are unknown (or even if he has limits); he could for example pull several boats easily, which even surprises Getafix and even more impressive to lift the foot of a statue without any effort. His strength even allows him to beat and send dozens of cohorts of legionnaires flying easily. Finally his strength allows him to deliver his menhirs easily and to uproot trees.

Superhuman speed: As seen in Asterix at the Olympics, Cesar's Papyrus and Asterix and the Transitalic, Obelix can run extremely fast (perhaps even at supersonic speed) and travel huge distances easily.

Intelligence (sometimes): Despite his raw, ignorant and naive side, Obelix can sometimes be intelligent as when he realizes in Asterix among the Normans that Cacofonix has left for Lutèce. 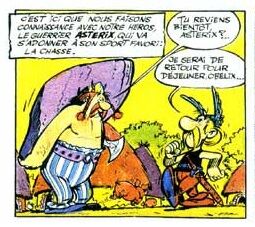 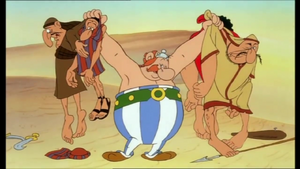 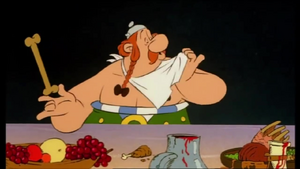 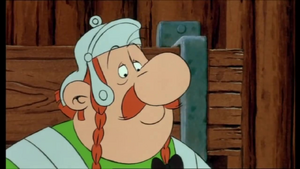 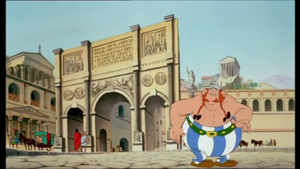 Add a photo to this gallery
Retrieved from "https://hero.fandom.com/wiki/Obelix?oldid=1939269"
Community content is available under CC-BY-SA unless otherwise noted.