Prince
Knight of House Martell
Sellsword of the Second Sons (formerly)
Maester apprentice (formerly, no chain or vow made)

Having sex with everyone, especially his paramour, Ellaria Sand

Avenge the deaths of his sister, niece, and nephew by murdering Gregor Clegane and Tywin Lannister (partially succeeded the former, indirectly the latter)
Help his brother Doran to remove the Lannisters from power

Prince Oberyn Nymeros Martell, known as the Red Viper, is a character from the HBO drama/fantasy series Game of Thrones as well as the ASOIAF novels, which the show is based on. Oberyn is a prince of Dorne and is Prince Doran Martell's hot-headed younger brother. He also the younger brother of Princess Elia Martell and has eight bastard daughters, called the Sand Snakes, the four youngest of which are by his last paramour, Ellaria Sand.

He is portrayed by Pedro Pascal, who also portrays The Mandalorian. Pascal also portrays Jack Daniels / Agent Whiskey in Kingsman: The Golden Circle, Maxwell Lord in Wonder Woman 1984, Marcus Moreno in We Can Be Heroes, and Joel Miller in The Last of Us.

Oberyn travels to King's Landing from Dorne supposedly for the wedding of King Joffrey I Baratheon and Lady Margaery Tyrell. However, after a brief skirmish with Lannister soldiers in a brothel, he subtly reveals to Tyrion Lannister that his true intention is to take revenge for the brutal murder of his sister Elia and her children by Gregor Clegane. He also intends to find proof that Tywin Lannister himself ordered the deaths and presumably take his revenge accordingly.

The day of King Joffrey's wedding arrives and Oberyn, along with his lover Elaria Sand, attend the ceremony and the feast afterwards. While dining Oberyn and Elaria are approached by Tywin and his daughter Cersei, the two parties begin to discreetly argue with each other. Tywin and Cersei insult Elaria's status as a bastard and the numerous bastard children Oberyn has fathered, this is answered with Oberyn chastising the Lannisters and their culture of looking down on anyone of a lower standing. Eventually Oberyn and Elaria make their way to their seats and are among the witnesses to Joffrey's death by poison as well as Tyrion being blamed and taken into custody for the murder.

After Joffrey's assassination Oberyn is visited by Tywin Lannister in a brothel while Oberyn is partaking in one of his infamous orgy's. He and Tywin converse, with Tywin conducting a subtle interrogation of Oberyn over Joffrey's murder seeing as Oberyn is well known for his vast knowledge and use of poisons. Oberyn denies his involvement in the King's assassination but flat out blames Tywin for his sister Elia's murder at the hands of Gregor Clegane. Tywin "categorically" denies the murders but does offer to set up a private meeting between Oberyn and the Mountain if Oberyn agrees to be a judge at the trial for Tyrion. At first Oberyn refuses the offer, however, Tywin then offers him a seat on the small council so he himself can represent Dorne, Oberyn intrigued that Tywin is openly admitting that they need Dorne, agrees to judge at the trial.

At Tyrion's trial, Oberyn quickly begins to realize that it is a farce and that Tyrion has all but been officially condemned to die. He is also witness to Tyrion demanding a trial by combat to the surprise of everyone in the court. Later in the black cells Oberyn visits Tyrion, and recounts to him of when Tyrion was a baby and he first laid eyes on him after hearing from Cersei what a monster of a little brother she had, Oberyn was unimpressed as saw just a baby and not a monster he then watched as Cersei brutally assaulted the infant Tyrion until she was stopped by her brother Jaime. Oberyn then tells Tyrion that he is in King's Landing to find justice for the murder of his sister and that he plans on starting with Gregor Clegane, who had just been chosen by Cersei Lannister as her champion in Tyrion's trial, therefore Oberyn agrees to be Tyrion's champion.

Oberyn stands outside of the fighting arena wearing light armor, wielding a spear with a large bladed tip and drinking wine, something that greatly worries Tyrion. However Oberyn, confident of his ability, assures both Tyrion and his paramour Elaria of his victory over the mountain. The trial then commences and Oberyn immediately tells Clegane he has come to claim revenge on him for the deaths of Elia and her children. As the two engage each other Clegane violently swings his massive great sword several times attempting to cleave the Red Viper in half, however each shot is missed as Oberyn quickly shows his advantage of speed over his massive opponent and dodges all of his attacks. Oberyn begins to wear the mountain down with his constant moving and striking him in the jointed areas of his armor with his spear. Oberyn demand Clegane to admit to his crime of killing his sister, while doing so Oberyn is knocked off balance by the giant which almost proves fatal but Oberyn manages to swiftly recover his footing. After frustrating Clegane enough the Red Viper finally moves in and cuts his Achilles tendon with his spear, dropping the Mountain to his knees. After this Oberyn creates space between himself and his opponent before taking a running leap and thrusting the tip of his spear through Clegane's breast plate causing the Mountain to cough up blood.

Oberyn, once again demands a confession from the Mountain in exchange for a quick death. He also demands the name of whoever gave the order to slaughter Elia and her children, while giving an accusing glare to Tywin Lannister who is observing from the crowd. However Oberyn, in his supposed moment of triumph, gets too close to Clegane, who suddenly springs to life and sweeps Oberyn off his feet before picking him up by his throat and smashing out the Prince's teeth whith one powerful punch. Clegane then gets on top of the stunned "Viper" and in a rage begins to gouge out Oberyn's eyeballs with his thumbs while sadistically confessing to Elia's murder for all to hear. In one powerful motion Clegane then brutally crushes Oberyn's skull with his bare hands killing the "Red Viper" instantly before collapsing to the floor. Elaria screams out in horror over Oberyn's brutal demise which has now sealed the fate of Tyrion Lannister who is then sentenced to death by his own father, Tywin.

It is later learned that Oberyn had coated his spear in Manticore venom, a highly poisonous substance that causes a slow and excruciating death by mortification. Clegane is seen in the care of Maester Qyburn when visited by Cersei and it appears that half of the Mountain's body has already begun to detriorate, despite Grand Maester Pycelle's insistence that Clegane is lost, Qyburn believes differently. Upon questioning from Cersei, Qyburn elaborates he can still salvage Clegane but it would "change" him, what Qyburn meant or what the salvage process entails is currently unknown but in the end Oberyn did indeed hear his confession from Clegane and seemingly exacted posthumous justice for his murdered sister and her children even at the cost of his own life. 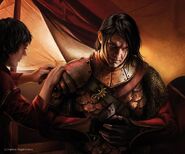 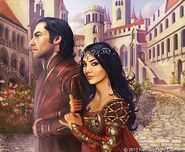 Oberyn and Ellaria, somewhere in Dorne.

Oberyn in his famous red armor.

Oberyn speaking with Tyrion about the wrongs and insults suffered by House Martell. 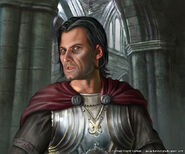 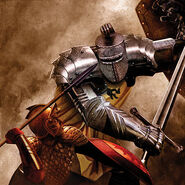 Oberyn the Red Viper against Gregor the Mountain That Rides. 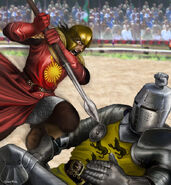